Even by his own lofty standards, Doug Flutie’s performance in the 1992 Grey Cup was extraordinary. Flutie threw for 480 yards and a pair of touchdowns to lead the Calgary Stampeders to a 24-10 win over the Winnipeg Blue Bombers.

It was Calgary’s third Grey Cup in franchise history and the team’s first title since 1971. The Stampeders were making their second consecutive appearance in the Grey Cup, having lost the 1991 championship game to the Toronto Argonauts. 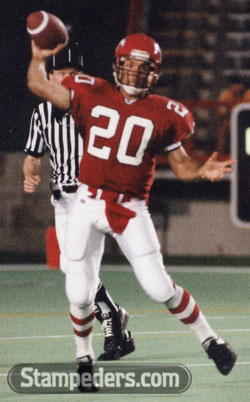 Stamps slotback David Sapunjis had seven catches for 85 yards and a touchdown to earn Top-Canadian honours.

The Stampeders jumped out to a 24-0 lead before the Bombers were able to put points on the scoreboard and Flutie got the Stampeders within scoring range on four of Calgary’s first five offensive possessions.

The Calgary quarterback hit Derrick Crawford on the game’s opening play for a 39-yard completion to set up Mark McLoughlin’s 37-yard field goal to open the scoring. Flutie and Crawford hooked up again on Calgary’s next series, this time for a 41-yard gain, but McLoughlin missed on a 50-yard field goal attempt and Calgary settled for a single point. Crawford, who was the fourth-leading receiver on the club during the regular season, ended the game with 162 yards on six catches to lead all receivers.

Near the end of the first quarter, Sapunjis reeled in a 35-yard touchdown pass from Flutie, and the rout was on. McLoughlin added a pair of 17-yard field goals in the second quarter, as the Stampeders held a 17-0 lead at halftime.
Following an uneventful third quarter, Flutie threw for his second touchdown of the game, connecting with Allen Pitts on a 15-yard play.

Calgary’s defence was outstanding as it held CFL East Division rookie of the year Michael Richardson to 27 yards rushing and chased starting pivot Matt Dunigan after he threw for just 47 yards in three quarters. Kent Warnock and Harald Hasselbach recorded sacks for the Red and White while Junior Thurman recovered
a fumble.