Following seven lead changes and countless momentum swings, the Calgary Stampeders earned their fourth Canadian Football League title — and they did it in dramatic fashion. On the final play of the 86th Grey Cup, kicker Mark McLoughlin connected on a 35-yard field goal at the gun to give the Stamps a 26-24 win over the Hamilton Tiger-Cats at Winnipeg Stadium.

McLoughlin, who grew up in Winnipeg, missed a field goal on Calgary’s first drive but rebounded by hitting his next four attempts. Stampeders quarterback Jeff Garcia was named Most Valuable Player after rallying his club late in the game. Garcia completed 22 of 32 throws for 259 yards and added 47 rushing yards and a rushing major. 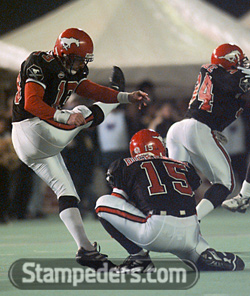 Stamps slotback Vince Danielsen had six catches for 82 yards and was the Top Canadian. Danielsen was one of six Calgary players on the receiving end of Garcia passes during the game, the others being Allen Pitts (five catches), Travis Moore, Kelvin Anderson and Terry Vaughn (three each) and Aubrey Cummings (two).

For days leading up to the game, temperatures in Winnipeg were unbearably cold but the mercury rose to 10 degrees Celsius at kickoff.

Anderson scored the game’s first touchdown on a three-yard run that gave Calgary a 10-3 lead in the second quarter. Hamilton running back Ronald Williams caught a 35-yard pass from Danny McManus that put the Tabbies ahead 13-10 and Paul Osbaldiston’s third field goal of the half gave Hamilton a 16-10 lead at the break.

Osbaldiston kicked a pair of rouges before Garcia led the Stamps on a 75-yard drive and capped the march by scoring on a one-yard run late in the third quarter.

The final frame featured several stalled drives from Calgary and three field goals from McLoughlin, including the clincher. The first of McLoughlin’s three four-quarter field goals was set up by a key turnover as Aldi Henry picked off a McManus pass. McLoughlin kicked another field goal five minutes later to give the Stamps a 23-18 advantage.

A run by Hamilton’s Archie Amerson set up a one-yard touchdown by Williams to put the Ticats ahead by one point with two minutes left to play. The two-point convert attempt failed, setting the stage for McLoughlin’s last-second winner.

Following the triumph, Calgary offensive lineman Rocco Romano hopped aboard the Stampeders Touchdown Horse to create one of the unforgettable images in the franchise’s history.