For the sixth time in franchise history, the Calgary Stampeders were the class of the Canadian Football League. They earned the distinction in Montreal with a 22-14 win over the hometown Alouettes.

Quarterback Henry Burris was named the Grey Cup Most Valuable Player after throwing for 328 yards — with one touchdown — and leading all rushers with 79 yards on nine carries. Sandro DeAngelis was named top Canadian, as he was perfect on five field-goal attempts. DeAngelis connected from 44, 12, 21, 30 and 50 yards out.

Brett Ralph had the only touchdown for the Stampeders, hauling in a 20-yard pass from Burris late in the first half. Nik Lewis chipped in with 11 catches for 122 yards. 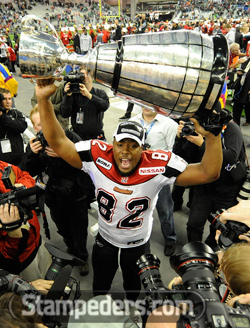 For the Alouettes, Avon Cobourne scored their only touchdown, a 16-yard run in the second quarter. Damon Duval was responsible for the rest of the scoring with field goals of 14 and 19 yards as well as a punt single.

Anthony Calvillo, who edged out Burris in voting for CFL Most Outstanding Player for the regular season, threw for 352 yards but had no touchdowns and two interceptions.

Montreal led 3-0 after a quarter, on a field goal from Duval. DeAngelis answered back in the second quarter with a 44-yard field goal to put the Stampeders back on even terms.

The Alouettes responded with the first touchdown of the game, a 16-yard scamper by Cobourne. Duval then kicked a 19-yard field goal to extend the Alouettes’ lead.

Late in the first half, Burris found Ralph in the corner of the end zone for a 20-yard touchdown to close the gap and give the Stampeders some momentum heading to the locker-room.

In the third quarter, DeAngelis put the Stampeders back on even terms before Duval added a single to regain the lead for the Alouettes. Burris put together a 75-yard drive, including runs of 14 and 29 yards for first downs, leading to the short kick from DeAngelis.

On the first play of the fourth quarter, Calvillo was intercecpted by Dwight Anderson as momentum started to swing in favour of the Stampeders. That led to another field goal by DeAngelis to give the Stampeders a five-point advantage. Midway through the frame, the Alouettes were threatening to regain the lead before an errant Calvillo pass was intercepted by Shannon James, quieting the Olympic Stadium crowd.