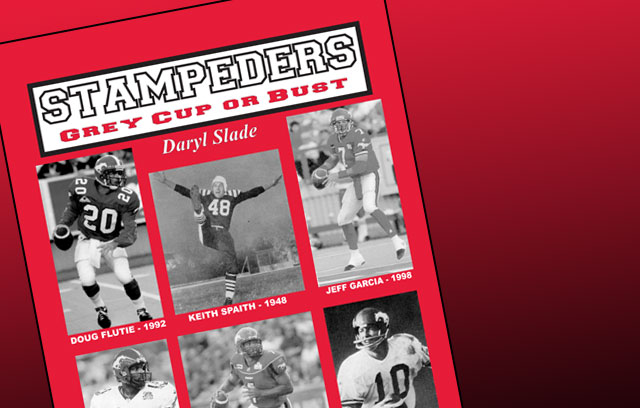 It’s everything you could possibly want to know about the Calgary Stampeders and their quest for the greatest prize in Canadian football.

A meticulously researched project by long-time Stampeders statistician Daryl Slade, the book “Stampeders: Grey Cup or Bust” chronicles the ups and downs of the Red and White’s playoff journeys over the years including 12 appearances in the Grey Cup game and no fewer than a half-dozen championships.

In a special Fanfest offer, “Stampeders: Grey Cup or Bust” will be available for only $20 at May 26 event at McMahon Stadium (or at the Foothills Football Dome in the event of inclement weather that day).

The book contains lists of the greatest moments in the Stamps’ playoff and Grey Cup history, a nice feature of one of the franchise’s all-time playoff heroes, Larry Robinson, and a detailed look at all the playoff recaps, stats and rosters in Calgary professional football’s history dating back to the Bronks in the 1930s.

There are also lots of great vintage photos and reproductions of game programs and yearbook covers.

“Grey Cup or Bust” is a sequel of sorts to Slade’s “Stampeders . . . The Years of the Horse” book in 2009 which chronicled Calgary’s football history with a focus on regular-season recaps, stats and rosters, not to mention plenty of great pictures.

The author will be on site at Fanfest to autograph copies of “Stampeders: Grey Cup or Bust” so don’t miss the chance to pick up your copy!