102nd Grey Cup at BC Place in Vancouver 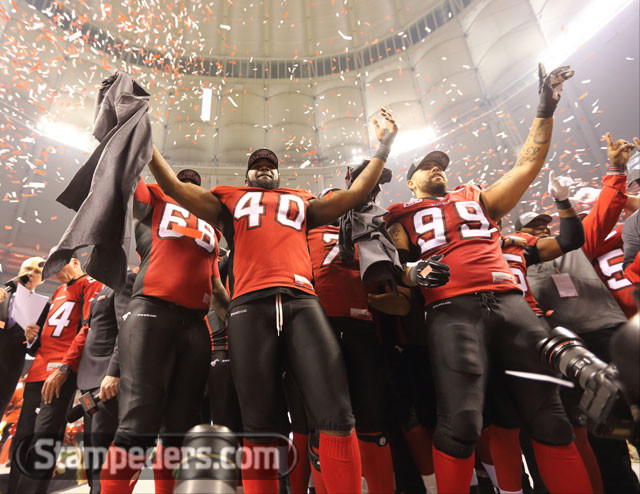 The Calgary Stampeders won their seventh Grey Cup championship in franchise history as they completed the Year of the Horse with a 20-16 victory over the Hmailton Tiger-Cats at Vancouver’s BC Place.

The offence staked the Stamps to a 17-0 and the defence made several critical stops in the fourth quarter to hold the Tiger-Cats to field goals as Calgary won its first title since 2008. It was also the Stamps’ league-best fifth Grey Cup championship since 1992.

Tate opened the scoring in the game’s 10th minute as he scored on a one-yard run. Mitchell went four-for-four on the 55-yard drive including a 28-yard completion to Eric Rogers. 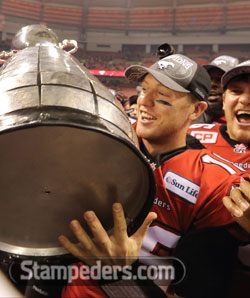 In the second quarter, Calgary doubled its lead when Tate once again scored from one yard out. The Stamps had a first-and-goal from the one-yard line after Hamilton’s Brandon Stewart was flagged for interfering with Rogers on a pass into the end-zone.

Rogers had a 43-yard catch later in the quarter that led to an 11-yard field goal by Rene Paredes. It was part of a five-catch, 108-yard game for Rogers, who was playing just his fourth CFL game. He joined Derrick Crawford, Carl Bland, Nik Lewis, David Sapunsji, Marc Boerigter and Travis Moore on the list of Stampeders who have had 100-yard receiving games in the Grey Cup.

The Tiger-Cats got on the board late in the opening half when Zach Collaros connected with Brandon Banks on a 45-yard catch-and-run touchdown.

Paredes kicked a 20-yard field goal with 4:32 remaining in the third quarter to make the score 20-7 for the Stamps headling into the final 15 minutes.

Hamilton got the ball inside the Calgary 25 on three occasions in the fourth quarter, including a first-and-goal from the three-yard line, but the Stamps defence refused to yield a touchdown as the Tiger-Cats settled for three field goals. Of note, Junior Turner and Freddie Bishop made big stops to force Justin Medlock to kick a 12-yard field goal after the Ticats had the first-and-goal from the three.

An illegal block penalty negated a Banks punt return and forced the Ticats to start their final drive from their own 12-yard line with 35 seconds left to play. Collaros completed three passes to get the ball to near midfield, but the quarterback’s last-gasp pass attempt as time expired fell harmlessly to the turf to seal the Calgary victory.