Playing for his hometown team 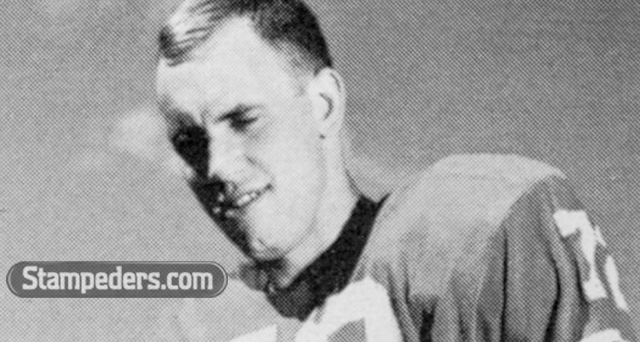 Playing for his hometown team

Gerry Shaw grew up in Calgary and graduated from Central High School before eventually enjoying a stellar 10-year career with his hometown Stampeders.

CFL Hall of Famer Hugh Campbell first met Shaw in Pullman in 1962 when the two were receivers together at Washington State.

“It was my senior year when he came in as a sophomore and started for us right away,” recalls Campbell. “We played together and it made a difference for both of us to have each other in there so they couldn’t gang up on us at the same time. He caught every pass that came his way and was an exceptionally good pass receiver.”

Shaw ranked high in receiving in the Pacific Athletic Conference both his sophomore and junior seasons and switched to defence for his senior year.

The local media gave Shaw the nickname “The Stampeder” simply because he hailed from Calgary.  Little did they know that’s the team where he’d end up playing his entire pro career.

Upon graduation, Shaw traded in his Crimson and Gray duds for the Red and White of his hometown team when he signed before the 1965 season.

“We were happy to sign Shaw,” then-GM Rogers Lehew was quoted as saying. “We think he’ll make a fine flanker or split-end for us.”

Shaw’s first head coach in Calgary was Jerry Williams, a Spokane native who also played collegiately at Washington State. Shaw would also play for head coaches Jim Duncan and Jim Wood during his days with the Stampeders.

When he finished his Stamps career in 1974, Shaw ranked second all-time in Calgary history with 313 catches and third in both receiving yards with 4,732 and receiving touchdowns with 34.

His best season came in 1972 as he led the team with 65 catches for 1,002 yards and 12 touchdowns. He was a West Division all-star and Calgary’s nominee for both the Most Outstanding Player and Most Outstanding Canadian awards that season.

He was a two-way player for the first part of his career, seeing action at defensive halfback from 1965-71. He was part of the Stamps’ 1971 Grey Cup-winning team and was added to the Red and White’s Wall of Fame in 2012.

Shaw made sure he set himself up well for life after football, starting a successful brokerage firm while he was still playing football.

Shaw passed away on March 19, 1995 at the age of 51 after a long battle with cancer. His friends planned a riverside garden in his honour, which was opened exactly six months to the day of his death. Gerry Shaw Gardens overlooks the Elbow River at Elbow Drive and 30 Ave. SW.

Campbell — by then the general manager of the Eskimos — was one of the many people who wanted to help honour their late friend. When Campbell heard about the park that was being built, he spoke with Stan Schwartz and Herm Harrison about having the Eskimos sell tickets to Edmonton’s Labour Day Rematch game against Calgary through the Stampeder ticket office. For every Calgary fan that bought a ticket, all the proceeds went towards the park.

“We were great friends from the time we met at WSU,” says Campbell. “He was courteous and everybody I knew liked him. He was a tough football player who could block and when he was on defence could tackle.

“And he was a good person. He was one of the good guys.”