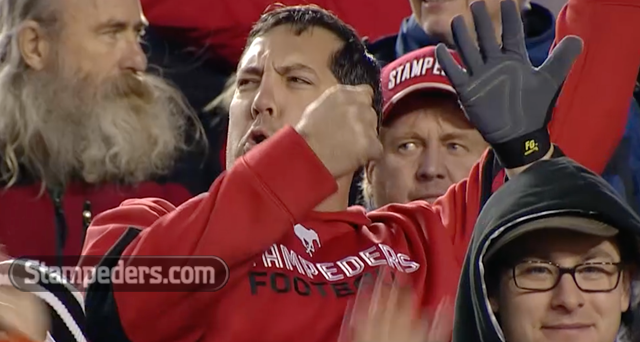 It starts off as an almost inaudible humming.

Then, it gets slightly louder. All the while, members of the Calgary Stampeders are rhythmically beating their chest in unison.

By the time the bass kicks in, emotions are at a fever pitch.

At first, fans at McMahon Stadium were a little taken aback by the sights and sounds when the Stamps kickoff-coverage team prepared for action during Sunday’s Western Semi-Final against the BC Lions. By the end of the contest, many Stamps supporters had joined in and were chanting and pounding their chests.

The ritual is borrowed from the movie The Wolf of Wall Street, specifically the primal “Money Chant” that Matthew McConaughey’s character teaches to Leonardo DiCaprio’s character.

It’s one part pump-up song and one part war cry and its connection to the Red and White started last month when the Stamps faced the Argos at Hamilton’s Tim Hortons Field.

“We had just scored a touchdown and we were getting ready to kick off and they started playing that song at the stadium,” recalls linebacker and special-teamer Maleki Harris. “A couple of guys in the huddle started beating their chest and the rest of the guys, because they had all seen the movie, started doing it. After that, we were really amped up.”

“We got into it,” says defensive lineman Frank Beltre. “I guess it was like everything happened when it was supposed to happen because we had just scored, we were going on kickoff, we started pounding our chest. It was just . . . everybody on kickoff got hyped. Then we go down (on kickoff coverage) and force a fumble.

“On the next kickoff, they didn’t play the song again but we just started pounding our chests on our own. Now we’ve adopted it. It’s becoming our thing for kickoffs.”

Beltre says there’s a purpose to the ritual.

“If you’ve seen the movie, that scene pretty much says, ‘Forget about everything else; let’s just do our thing,’ ” he remarks. “That’s the mentality that we have. Be physical. Be relentless. Just go down there and hit whatever you see.”

The rallying cry came in handy for the Stamps, who surrendered five kick-return touchdowns prior to that fateful night in Hamilton.

“Those guys had been battling adversity all through the season,” notes special teams coordinator Mark Kilam, “and it was something that brought them together and brought them close. It’s something they’ve been rallying around.”

Arrangements were made to play the song when the Stamps kickoff team lined up on Sunday and, in addition to having the desired motivational impact on a special-teams unit that effectively contained dangerous Lions returner Chris Rainey, the chant spread to the stands.

“It was so cool seeing the fans doing it at the end,” says Harris.

“Yeah, we saw that,” grins Beltre. “And that’s what we were hoping would happen. We’re glad that we got everybody into it. So hopefully now fans will know that’s what we’re going to do before every kickoff.”

And maybe not just at McMahon, either.

“Even next game,” notes Beltre, “when we’re in Edmonton, we’ll do it just us and the Stamps fans that are there will join in.”