Turner on guard in post-season win 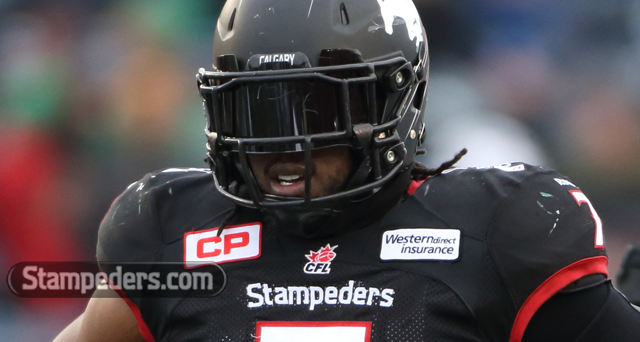 Turner on guard in post-season win

Junior Turner knew he was the next man up, although he never would have predicted it.

An injury to starting centre Pierre Lavertu forced Quinn Smith to fill in along the offensive line once again and, as soon as Shane Bergman went down, Turner was tossed into the fray. The Stamps only dressed six offensive lineman for their Western Semi-Final win over the BC Lions including Smith, a defensive tackle who has been forced to showcase his versatility in recent weeks.

But Turner’s transition from defence to offence was a first for the former second-round draft pick, who was asked to assess his play alongside offensive line coach Pat DelMonaco’s crew once trading in his customary No. 7 for jersey No. 69.

“It was alright,” said Turner, who made a stop on Lions running back Andrew Harris before making the switch. “The guys on the O-Line were patient with me and talking me through plays and stuff like that. It seemed to slow down. Patty coached me up a bit and if they didn’t believe I could do it, they wouldn’t have had a jersey for me.”

Calgary’s nominee for Most Outstanding Canadian in 2015 also earned praise from his head coach, who applauded Turner for his admirable performance following the 35-9 victory.

“I thought we handled adversity with a lot of poise because that’s what we were under, but Junior was confident and when we had the first injury we shortened the game plan,” explained John Hufnagel during his post-game media availability. “And when we had the second injury, we threw the game plan out. But Junior did a great job.”

With Turner slotted in at left guard, Spencer Wilson moved to centre while Smith took over at right guard.

“(Coach) Huff always says, day-in and day-out, we pride ourselves on preparation,” the Bishop’s alum offered. “During the week, Pat and I always go over O-line stuff. I always tell him I don’t want to do it, but I show up to the meetings and take the time to learn and see some stuff. Having guys out there like Derek Dennis, he and Spencer talk me through stuff and we had good communication on the line, so it wasn’t too bad or overwhelming. The only thing is, I was like, ‘Don’t let my quarterback get hit.’ ”

Fortunately for Turner and the rest of the makeshift line, Bo Levi Mitchell was never sacked on Sunday afternoon. The Red and White allowed the fewest quarterback takedowns in the regular season despite long-term injuries suffered to opening-day starting tackles Edwin Harrison and Dan Federkeil.

With confidence and momentum now on their side, Turner and the Stampeders will look to build on their most recent performance to try and knock off the Eskimos. A second consecutive Grey Cup berth will be on the line for the Stamps in next week’s Western Final from Commonwealth Stadium.

“It’s just one win,” stressed Turner. “We’re not where we want to be yet. It was a good team effort. We came fired up and (we) executed. Next week, we just have to prepare and do the little things. I’m just happy for a team win. Everybody stepped up. Everybody contributed in some way, shape or form.”