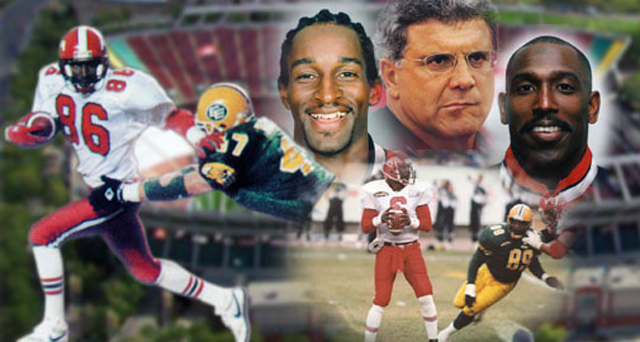 For Calgary Stampeders fans of a certain age, a Western Final between the Red and White and the Edmonton Eskimos at Commonwealth Stadium — as will be the case on Sunday — brings to mind a very specific and wonderful memory.

The Stamps have won seven Grey Cups over the years, and it would be a fairly easy sell to declare those championships the most important victories in the club’s history.

But looking beyond those select contests and all the regular-season and playoff games played by the Red and White since 1945, few stand out more than the West final in Edmonton that was played a little more than 24 years ago on Nov. 17, 1991.

The Stamps’ 38-36 win over the Eskimos is memorable for so many reasons, starting with the spectacular ending. Down 33-18 after three quarters, Calgary mounted a furious comeback that was capped with 1:02 left to play by Danny Barrett’s 67-yard touchdown pass to Peewee Smith, who memorably ran through the end zone after the score and into a Commonwealth Stadium hallway leading to the locker-rooms.

“It was a deep route for me,” Smith told reporters after the contest. “I saw Danny scrambling and I was coming back to the quarterback. I saw him waving. He put the ball in the air. It was a broken play, so I just took off. I didn’t want anybody to catch me from behind.”

Here is how Stamps offensive lineman Leo Blanchard saw the big play: “I was running down the field and I could see Peewee open but I thought the ball was way overthrown. I can’t believe he got to it, but Peewee just turned on the jets.”

Smith’s heroics were notable on a couple of fronts.

Firstly, he scored the winning points in both of the Stamps’ 1991 playoff contests — against BC in the West semi-final and then again in Edmonton the following week — after failing to record a touchdown catch during the regular season.

Secondly, a year prior to the Comeback at Commonwealth, Smith had been guilty of a dropped pass in the Stamps’ West final loss to the Eskimos in the 1990 West final at McMahon Stadium.

But for a Stamps fan, those personal factoids are mere footnotes to the larger significance of that 1991 afternoon in Edmonton.

First, a history lesson is in order. The years following the Stamps’ win in the 1971 Grey Cup were not kind to Calgary fans. In the 19 seasons from 1972 to 1990, you see, Calgary failed to make the playoffs 11 times.

In the eight trips to the post-season the Stamps made during that stretch, the Red and White managed just a 2-8 record and the Stamps were knocked out of the playoffs by the mighty Eskimos no fewer than five times.

Under new coach Wally Buono, the Stamps started to turn things around in 1990 with an 11-6-1 and a bye to the West final, but those dastardly Eskimos broke Calgary fans’ hearts. Again.

That’s why the 1991 West final — the Stamps’ previous playoff victory in Edmonton had been in 1970 — and the miraculous rally were very cathartic for long-time Calgary fans.

Star receiver Allen Pitts spoke for many Stamps supporters when he declared: “It’s a great feeling. The people from Calgary? They’ve got to feel something, too. For all of us to pull it together and win it the way we did, it just says a whole lot about this team. The myth is gone from here. This field, that we can’t we win? That’s gone.”

“We crossed a bridge and Edmonton knows it, too,” Stamps linebacker Matt Finlay said after the contest.

“It just seems that since I’ve been here, we’ve always been fighting for credibility,” said defensive lineman Kent Warnock. “Fans always said, ‘They can’t beat Edmonton.’ The rap was always there. Now it’s history. We beat them here with everything on the line, no excuses.”

“The Stampeders organization has taken a lot of abuse,” remarked Buono after the historic result. “Partly their fault, partly that’s just the way it is. This is a different team because the attitude is different. I believe in attitude and then you go from there.”

While it’s true that the Stamps lost to Toronto in the 1991 Grey Cup, the 1991 West final in Edmonton was nevertheless a springboard to a memorable decade for the Red and White. Starting with a championship in 1992, the Stamps made five trips to the Grey Cup game in 10 years and won three rings.

In many ways, that success goes back to that long bomb from Barrett to Smith at Commonwealth Stadium.