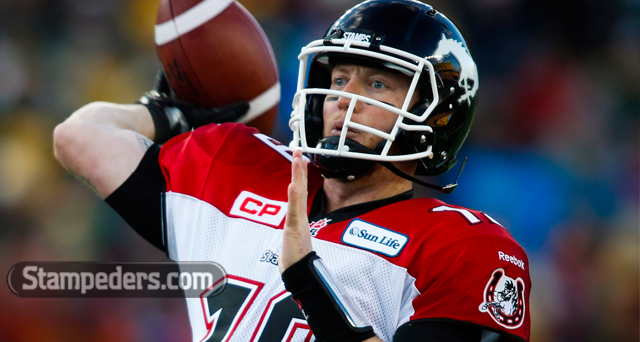 After a hard loss, you’d think a player would try to forget the pain as quickly and ruthlessly as possible.

But not so for Stampeders quarterback Bo Levi Mitchell.

The fourth-year Stamp says there’s a very simple explanation for the fact the Eskimos are headed to Winnipeg to face the Ottawa RedBlacks in the Grey Cup while the Stamps are done in 2015.

“They made the plays and we didn’t,” he said. “You’ve got to give credit to them — they played one helluva game. They were sharp in their game plan and they executed.

“Between two 14-4 football teams, it’s going to come down to execution. There’s no better team. Those two teams are very evenly matched. Today, they made the plays and we didn’t.”

In addition to the usual anguish about a season that has ended too soon, the Stamps realize they missed out on providing a storybook final chapter to John Hufnagel’s head coaching career.

“We wanted to send him out with a good farewell,” said Mitchell. “To go back to back and hold that trophy over his head. That’s not the case, but he’ll still be strong in our organization, we all know that. He’ll still be up there at the top. We’ll make sure that we get back to these points.”