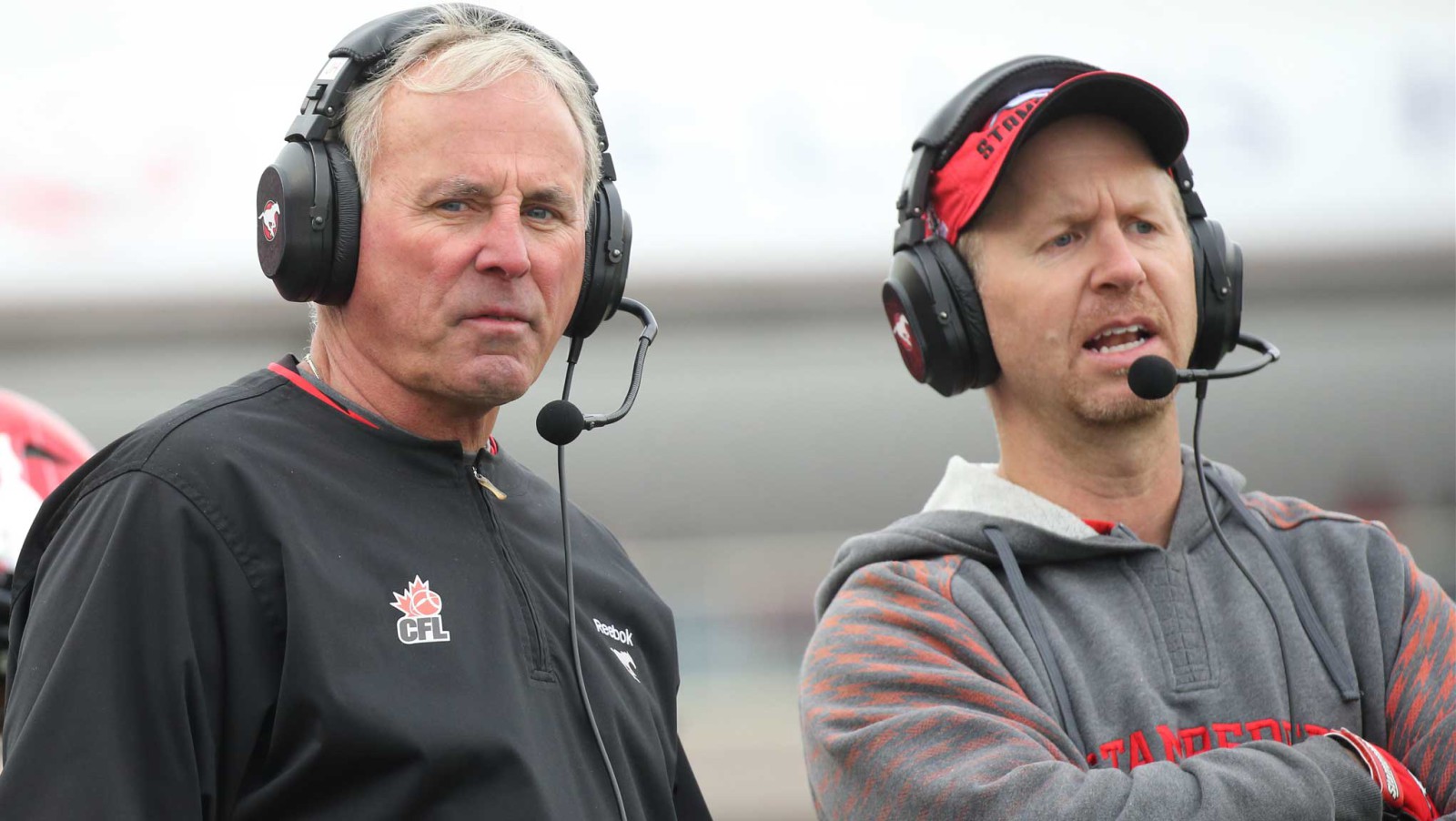 John Hufnagel and Dave Dickenson on the sideline during a game against Saskatchewan in 2015.

John Hufnagel could be forgiven for walking right past his office door when he reports for work in the morning.

Until recently, he would climb the stairs to the second floor of the coaches’ building at McMahon Stadium, hang a left, walk down a short corridor and then turn left to get to the head coach’s quarters. Now, if he remembers, he can pull up before the second turn and step into the new office space reserved for the general manager.

His old digs are now occupied by Dave Dickenson, who this coming will be the first man other than Hufnagel to coach the Calgary Stampeders since 2007.

Coach Huff’s accomplishments at the helm of the Stamps — 102 regular-season wins, eight winning seasons and eight playoff appearances, two Grey Cup titles, two coach-of-the-year awards — have been well documented but it’s sometimes easy to forget how long eight years is in the world of professional sports.

It was Dec. 3, 2007, when Hufnagel was introduced as the head coach and general of the Red and White.

At that time, the Ottawa RedBlacks were just a gleam in Jeff Hunt’s eye, Mark Cohon was just nine months into his term as CFL commissioner and the league was evaluating its first season under the new salary management system, with set the limit for each team’s payroll at $4.05 million.

A look at the other CFL head coaches at the time Hufnagel was hired is another indication of how much things have changed.

In Montreal, Jim Popp had just been relieved of head coaching duties and asked to concentrate on his role as GM. Popp has since returned to the sideline as the Alouettes’ head coach on two separate occasions and currently holds the position.

Trestman was hired two weeks after Hufnagel got the Stamps job and has since served as head coach of the NFL’s Chicago Bears and offensive coordinator of the Baltimore Ravens.

To track another person who has had a winding career path while Huff was a McMahon mainstay, Rich Stubler was hired as head coach of the Toronto Argonauts just a couple of days after the press conference to announce Hufnagel.

Meanwhile, on the west coast, Wally Buono was head coach of the BC Lions when Hufnagel got the Stamps job, just like Buono is head man of the Leos today. But in between, Buono kicked himself upstairs to work exclusively as GM and Mike Benevides and Jeff Tedford both took turns at the BC helm before Buono announced his return to the sidelines in December.

The other CFL coaches on Dec. 3, 2007, were Danny Maciocia in Edmonton, Kent Austin in Saskatchewan (who would announce his resignation a month later to take a U.S. college job), Doug Berry in Winnipeg and Charlie Taaffe in Hamilton.

All told, 27 coaching moves were made in the CFL between the time Hufnagel was hired and Dickenson moved into Huff’s office.

CFL head coaches in December, 2007 and what they are doing today

BC – Wally Buono (Announced return to BC sideline in December, 2015)

Winnipeg – Doug Berry (Retired from coaching, was OC of Alouettes in 2013)

Current head coaches and what they were doing in December, 2007