Running back Jerome Messam on October 21, 2016 (Photo by David Moll)

The old saying about the light, the end of the tunnel and a train?

“That,’’ agreed fullback Rob Cote, nodding over at the nameplate above Jerome Messam’s locker-room stall, “is one big train.”

Hurtling down the tracks with the speed, the power and the pedigree of the Orient Express thundering across the Austrian countryside.

“I’ve been in the rushing race a couple of years and been edged out by other guys.

“I’m getting my chance to shine now.”

Another 111 yards tacked on to the 1,051 total, an 11.1 average and a 14th straight win for the Calgary Stampeders, 31-13 conquerors of the fast-fading Toronto Argonauts.

In the second half, due to a conscious effort to divvy up playing time, Messam had only two carries.

“He was real good today,’’ adjudged Stamp boss Dave Dickenson. “We used our whole roster except for the quarterbacks.

“We essentially let everyone get a chance to get in there. Said ‘Hey, we’re playing the whole roster so when you get your chance, make plays.’

“He knew he wasn’t going to get the carries he normally does but he sure took advantage of it. He was rolling downhill and I thought he did a good job in protection, too, which was an issue last week.

“He stepped up and had a good game.” 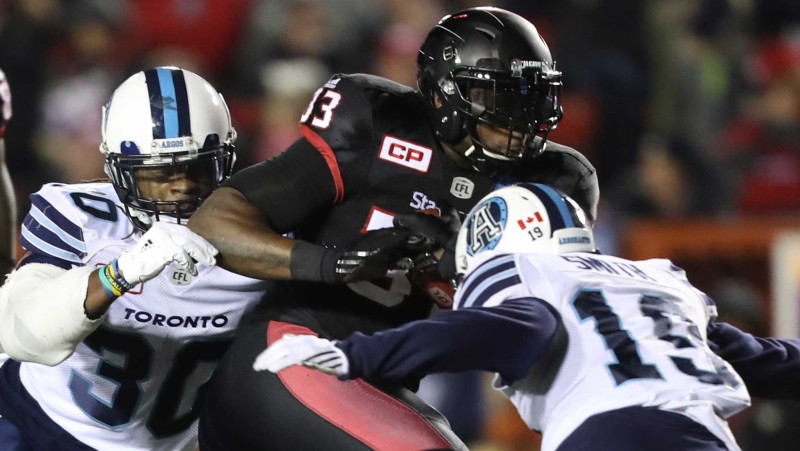 On the first Stampeder snap from scrimmage, Messam established his ground rules early, accelerating into the hole at warp-speed, rocketing for 31 yards.

“I kinda know how I’m going to do during the warm-up,’’ Messam revealed. “If my body feels good and Dickie calls for me to get the ball early, I know I’ll get in a groove and it’ll be a long day for the defence.

“The hole was just huge. Just hit with speed and keep going forward.”

On that carry, seven yards into the jaunt, he eclipsed his own personal season yardage high – 1,057 set in 2011 as an Edmonton Eskimo.

“Good for him. He works hard. He deserves it.

“He tests the will of defenders. The question a defender has to ask himself is: Do I want to tackle him? Do I REALLY want to tackle him? Because you really have to want to. Otherwise, he’s not going down and it’s going to hurt. Or you’re getting out the way.

Friday’s match-up was a study in contrasts: A team looking to make history against one trying to avoid being history.

And, as a sidelight, a match between Nos. 1 and 2 in the CFL rushing race. Messam entered the fracas leading Argo tailback Brandon Whitaker by a healthy 196 yards

“With him being second, behind me, I have to take my hat off to my defence,’’ lauded Messam. “Two weeks ago when we played them, they held him to negative yards.

“As well, the offensive line has been doing a helluva job all year. Guys banged up, guys playing different positions. It’s just a testament to our scheme and to the calibre of players we bring into this organization

“They’re going a great job keeping me in the lead. As long as the offensive line keeps up what they’re doing, I think I’ll take the title.” 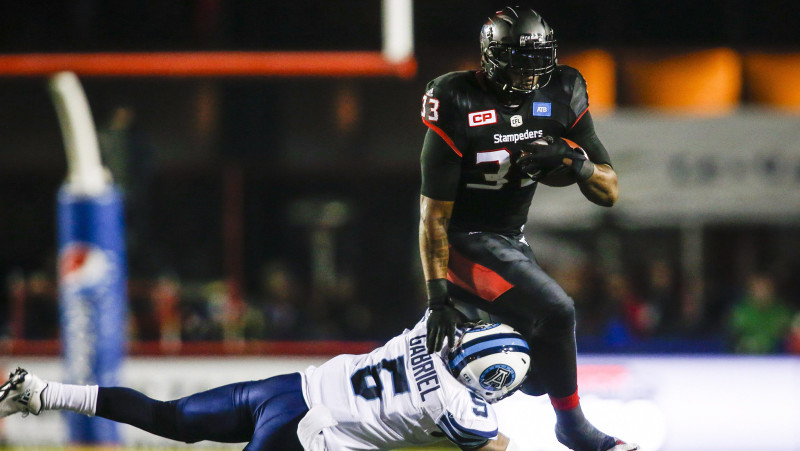 The opportunity to make history remains as Calgary travels to Montreal next weekend.

Messam’s pleased as punch to be a part of it all.

“I had a lot of thinking in the off-season about where I wanted to sign,’’ he said, “and I figured Calgary was home for me just on how the system works.

“It’s not really about getting a lot of carries. It’s about being productive. You get seven-eight on first down in the CFL, it makes second down so much easier.

“Then you can still get the ball on second down. I haven’t had that many carries to beat up my body but when I have had the chances, I’ve been productive.

“I think that’s why Dickie has been able to balance so much in passing and running.”

That balance – Messam’s ability to slot into the spot vacated by a superstar back, the retired Jon Cornish – has helped Mitchell’s aerial assault.

“Defences can’t be dropping off. We’ve stuck with the run all year and look where it’s gotten us. We’ve just got to stick with it.”

Chances are, by the next game the Stamps strap on he pads at McMahon Stadium, Nov. 20 and the Western Final, the temperature will be dropping, the footing will be slicker and the need for a big, powerful train thundering through that tunnel will only increase.

“Those are the type of games I like,’’ said Messam happily. “It’s going to be a pressure game, win or go home

“I thrive in those moments.

“I’m going to want the ball a lot and I’ll do whatever I can to help this team get to where it wants to go.”