Charleston Hughes managed to pad an individual stat on Sunday in Montreal, but it’s the unprecedented team accomplishment that he most wishes could have been achieved.

The 32-year-old veteran defender brought down Vernon Adams, Jr. of the Alouettes for a seven-yard loss during the second quarter of play, but it was Montreal who ultimately came out on top in terms of the final score.

“I missed a couple plays out there that I probably should have had,” confessed Hughes post-game. “It’s just unfortunate, you know, that quarterback, he’s a little bit more agile than I thought he was. I guess the angles on film were different than being on the field. I guess that’s the way it is, but I’ve got a two-sack lead on Lemon and Chick, so we’ll see what happens.”

Now with a two-sack cushion over Hamilton’s John Chick and Toronto’s Shawn Lemon, Hughes isn’t overly concerned as to who will ultimately take home this year’s sack title. Despite the fact that the Ticats and Argos each have one more game yet to play, No. 39 is already shifting his focus to earning the right to play for CFL supremacy in 2016.

“I’m just going to let the numbers unfold how it is,” the nine-year veteran offered after registering sack No. 16 for the season. “I can’t stop them from making plays, they can’t stop me from making plays. I’m just focused on the playoff game and doing what we’ve got to do to get to this Grey Cup.”

Calgary had the opportunity to finish their campaign with the most points in the standings following an 18-game schedule in CFL history, but the Stamps’ 17-8 loss to the Als denied that record-breaking feat.

“I mean, 15-2-1 is still a good record,” indicated the Saginaw, Mich., native and former member of the NCAA Div. II’s Northwood Timberwolves. “That’s the best record I’ve had since I’ve been here and it’s still a good thing. We didn’t get 16-1-1, but we still can look on the bright side and say we still had an awesome year.”

A Week 20 bye coupled with an automatic advancement to the Western Final will see the Stampeders out of action until Nov. 20 when they will take to the field at McMahon Stadium. Hughes plans on making the most of the upcoming break, a span of time that will include a trip home as well as plenty of preparation for their next opponent – whoever that may be. 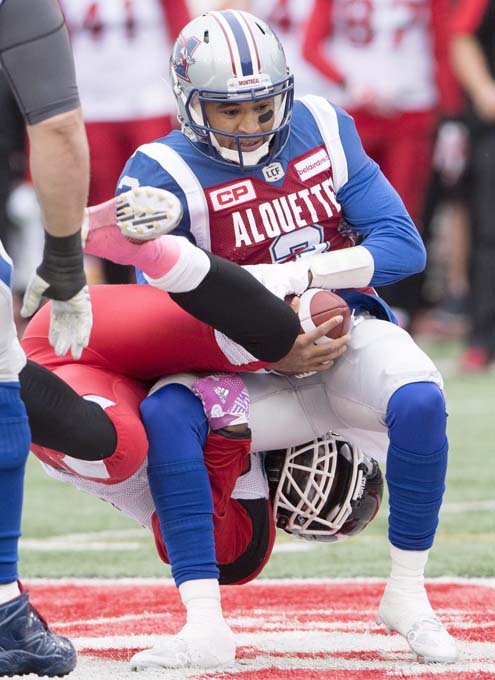