Greg went out in style

Greg went out in style

This year marks the 25th anniversary of the Stampeders’ 1992 Grey Cup championship, so we’re looking back at the squad that snapped the Stamps’ 21-year title drought and the cast of characters responsible for the conquest.

This week, we hear from former defensive back Greg Peterson, who for the past 20 years has been the colour commentator for Stamps broadcasts on News Talk 770. 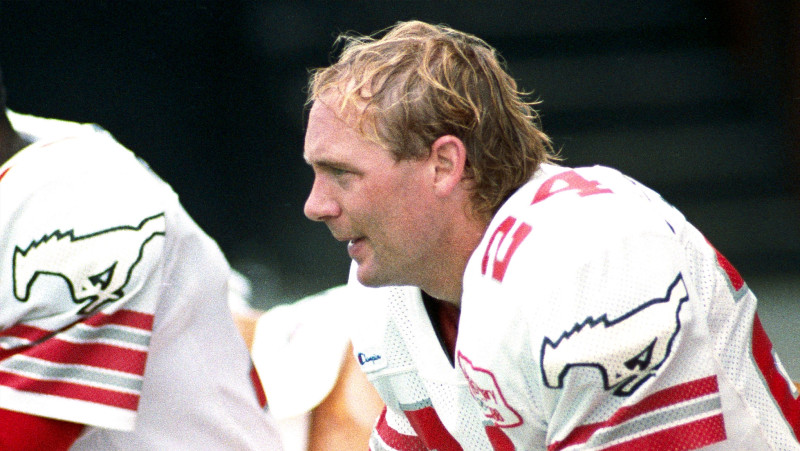 Peterson during the 1987 season (Photo by Scott Grant)

If Greg Peterson was making closing arguments to a jury back in 1991, he could have made a compelling to case to close the books on his CFL career.

The Stampeders defensive back, after all, had already toiled for eight seasons with the Red and White and the freshly minted lawyer was faced with a growing list of legal clients and growing demands on his time.

But ultimately, the verdict was, ‘Play on.’

Good move – the Stamps’ 1992 Grey Cup conquest allowed Peterson to go out a champion. In addition to a Grey Cup ring that season, Peterson picked up a pretty good story.

“The thing that sticks out most in my mind,” he says, “is that after the (Grey Cup game), almost everybody had left the locker room. I was one of the last guys left with Stu Laird and maybe Kenny Moore and a couple of other guys. I hung around because I was visiting with family and friends.

“Finally, somebody said, ‘Pete, you’ve got to get dressed. Everybody has left and you’ve got to get out of here.’ So I went back to get a towel and there sat the Grey Cup in a back room of SkyDome. So I picked it up and went back (into the locker room) and said, ‘Guys, nobody took the Grey Cup. What are we supposed to do with this?’ ”

The stragglers decided to bring the trophy to the Stamps’ post-game celebration and their arrival was met with rousing cheers. Peterson, a teetotaler who in the midst of post-game celebrations was in the best position to appear on camera, was then whisked away to a distant studio to do an interview with a Calgary TV reporter.

“When I came back,” says Peterson, “the party was kind of toning down a little bit and I connected back up with Stu and Ken and a bunch of others and we said, ‘Let’s go take our wives out to get something to eat.’ Then Kenny Moore says, ‘Let’s go get the Grey Cup. I hear it’s in (owner Larry) Ryckman’s room.’ ” 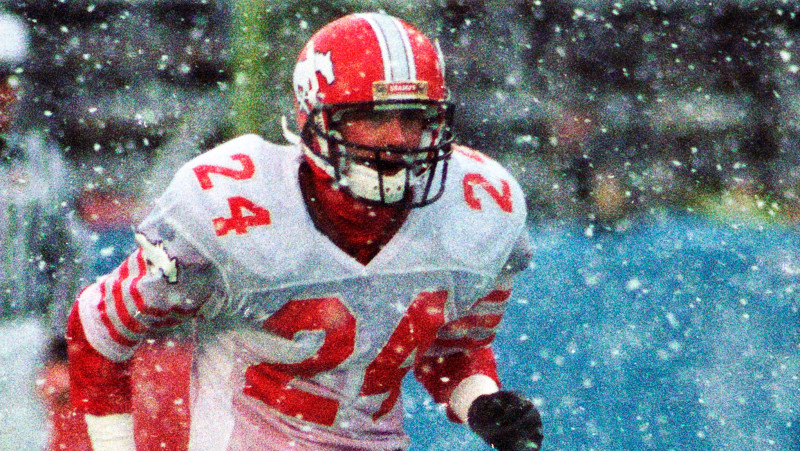 Peterson during the 1989 season (Photo by Scott Grant)

The contingent of football players enlisted the help of a hotel employee to secure the famous trophy.

“What do you do,” chuckles Peterson, “when you’re the bellboy and there’s all these six-foot-four, 280-lb. guys – I was the smallest guy there – and they’re saying ‘open up the door’? So he opened the door and there sat the Cup. We picked it up and we took it.”

Cup in tow, the group went out for Chinese food.

“Then we went back (to the hotel),” says Peterson, “and it’s really late at night and we said, ‘What are we going to do with the Cup?’ Somebody told us that Ryckman and Wally (Buono) had heard what we had done and that they were livid. So Kenny says, ‘Greg, we know this is your last year, and maybe Stu, too. So you guys should take it.’ Stu even put it on my bed and said, ‘Now you can say you slept with the Cup.’ ”

Then came the morning after and the dilemma of what to do with the evidence. Over to you, counsellor.

“I could tell Stu was worried,” says Peterson. “I knew he was going to (play the following season) so I said, ‘Stu, this is my last year, I’ll take all the heat. I’ll go give it to them.’ ”

And so Peterson tracked down Ryckman and Buono and handed over the Cup.

“I could tell they weren’t happy,” he laughs, “but I didn’t really care because I got to spend the night of the Grey Cup victory with the Grey Cup.”

To think the title and post-championship adventures all came about because of Peterson’s decision to put off full-time lawyering for one more year.

“I’m so glad I came back that year and I’m so glad that I got to spend my last night as a Stampeder with the Grey Cup,” says Peterson, who is a senior partner in Gowling WLG’s Calgary office.

“It was great for Stu and I because we were Calgary boys, we’d played high-school football against each other and we’d been roommates for almost my entire career. It was good way for Stu and I to finish off that year and for me to finish off my career.”