The 27th annual It’s A Snap, presented by Fabutan, took place this week with approximately 300 women in attendance over two nights at McMahon Stadium.

Each night began with a pre-game talk in the Stampeders locker room. Emcee Alanna Nolan from Stamps TV told participants what to expect that evening before President and GM John Hufnagel took to the podium to welcome the ladies and talk about some off-season changes to the roster. Up next was head coach Dave Dickenson, who introduced his coaching staff and players in attendance, followed by a pre-game speech similar to the one he gives on game days.

The participants then broke up into four groups and rotated between on-field and classroom sessions.

In the defensive classroom, defensive coordinator DeVone Claybrooks and his staff kept the ladies laughing while teaching them defensive positions and coverages. Linebackers coach Brent Monson demonstrated what NOT to do by showing old clips of Claybrooks and defensive line coach Corey Mace during their playing days. Yes, the clips were in colour, not black and white!

“Do as I say, not as I did,” chirped Claybrooks, who spent three of his five years as a CFL player with the Stamps. 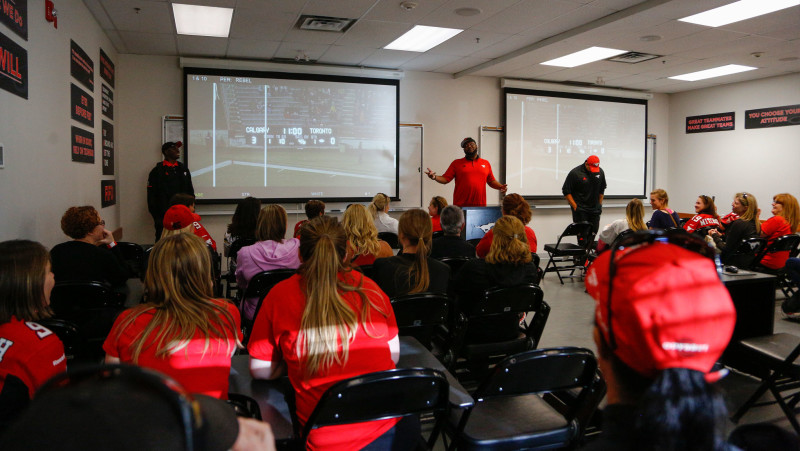 Over in the offensive classroom, the women learned about the passing game, running game, formations and plays. They also were educated on the positions along the offensive line and how they react to different defensive-line schemes.

“We’re not as dumb as the guys over in the defensive room led you to believe,” quipped o-line coach Pat DelMonaco.

Out on the field, the ladies got to run through offensive and defensive drills with the players. They were taught how to pass and catch by Bo Levi Mitchell and Deron Mayo and had to show off their best touchdown celebrations.

Everyone came up with creative ‘cellies’ but the standout of the evening was Lisa Longball –  seven-time women’s Canadian Long Drive Champion Lisa Vlooswyk, currently ranked Top 5 in the world – who did a back handspring, back flip in the end zone.

Rene Paredes, with help from Max Caron and Spencer Wilson, was at the field-goal station and saw some successful kicks from his pupils including one from Olympic gold medal wrestler Erica Wiebe.

On Night 2, the versatile Wilson also taught the different stances along the offensive line. He should know – he’s played every single one of them!

Adam Thibault and Ben D’Aguilar put the women through various ladder drills while Dan Federkeil and Quinn Smith encouraged ladies to hit dummies as hard as they could at the bag drill.

The fun evening wrapped up back in the locker room with a wine reception. The ladies mingled with players and coaches, were offered wine and Spiked Snapple samples and finger foods, had the opportunity to have their makeup touched up by Fabutan and Hush Lash Studio and prize winners were announced. The Stamps Store was also set up with the latest merchandise.

Overall, it was another successful It’s A Snap and we’re already looking forward to next year!