Sunday was a landmark occasion for Tunde Adeleke and the Carleton University football program.

Carleton revived its football team four seasons ago which means this year’s Canadian Football League draft provided the first chance for Ravens players such as Adeleke to be selected since the late 1990s. Accordingly, the team gathered at an Ottawa watering hole for the historic draft day.

“There were 20 or 30 of us there,” notes Adeleke, a standout defensive back and kick returner for the Ravens, “so it was a nice experience with the team.”

Adeleke was one of seven Carleton players who ended up hearing his name called as the Ottawa native was selected 25th overall by the Stampeders. The only Ravens player taken higher was receiver Nate Behar, who just happened to be picked up by Calgary’s interprovincial foes, the Edmonton Eskimos.

It’s worth noting the Stamps and Eskimos will meet in pre-season action next month.

“I’ve covered him in practice for four years,” laughs Adeleke. “Now I’m looking forward to doing it on the main stage and showing people I can lock him down.”

Cameron Legault, who was drafted by the Stamps in 1999 and who was active through the 2006 season, had been the last Ravens alum to play in the CFL. Now, a new flock is arriving.

“It’s really exciting and an honour to be able to represent the program in the CFL,” says Adeleke.

Upon graduating from St. Francis Xavier High School in the Ottawa-area community of Gloucester, Adeleke weighed his university options before settling on Carleton. He was joined on the re-born Ravens program by high school teammate and fellow defensive back Nathaniel Hamlin, who on Sunday was drafted by the BC Lions. 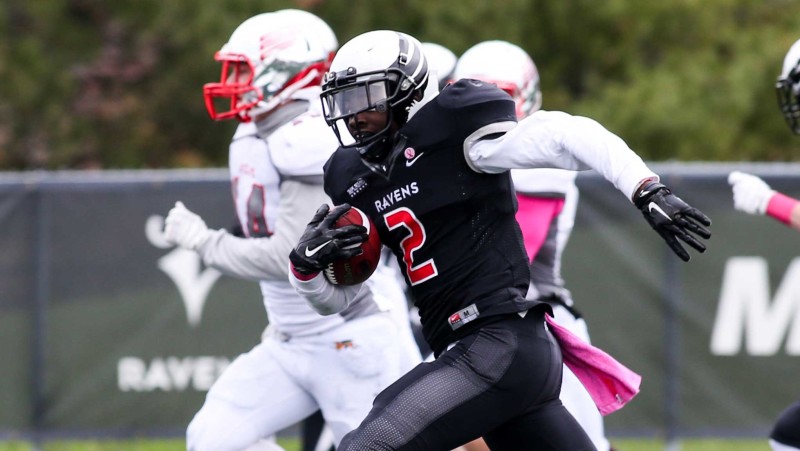 “We started the program (at St. Francis Xavier), too,” says Adeleke. “In Grade 9, the football team started and we eventually became a championship team. So when I got the opportunity to do that in CIS – and it being in Ottawa made it even better – I felt like I’d been there, done that before and I thought I could do that here.”

After going winless in their first season, the Ravens were a respectable 4-4 in Year 2 followed by records of 5-3 and 6-2.

“I was hoping last year was the year we could have gone to the Vanier (the Ravens lost to Western in the Ontario semifinal) but as long as we keep getting better and better,” he remarks, “I’m happy with the progress no matter that the team does next year with me or without me.”

Whether Adeleke returns to Carleton for his fifth and final season of eligibility depends on how things transpire at his first training camp.

“I’m hoping to give the Calgary Stampeders as much as I can, being both a returner and a DB,” he says. “So I’m working on both and hopefully when I get there, I’m able to help the team in both aspects of the game.”

Adeleke earned first-team all-Canadian honours as returner in 2015 after racking up 1,126 combined yards on kickoff and punt returns. He has nine career punt-return touchdowns with the Ravens.

Defensively, he has 127 total tackles and four interceptions in 31 career games.

Adeleke’s performance at the CFL draft combine – he posted the fastest time in the 40-yard dash – only enhanced his value in the scouts’ eyes.

“I think they already knew I was one of the faster guys in the draft class,” says Adeleke, “but having the (fastest-man) combine title is probably something teams looked at. And I feel my on-field play in the one-on-ones got my draft stock up.”

The next test for the speedster comes May 25 when he takes the field for the start of the Stamps’ rookie camp. After that comes pre-season action against Hamlin’s Lions and that showdown against Behar and the Eskimos.