DB Greg Knox during the 1994 season (Photo by Scott Grant)

This year marks the 25th anniversary of the Stampeders’ 1992 Grey Cup championship, so we’re looking back at the squad that snapped the Stamps’ 21-year title drought and the cast of characters responsible for the conquest.

This week, we catch up with Greg Knox, who was a rookie on that ’92 squad. 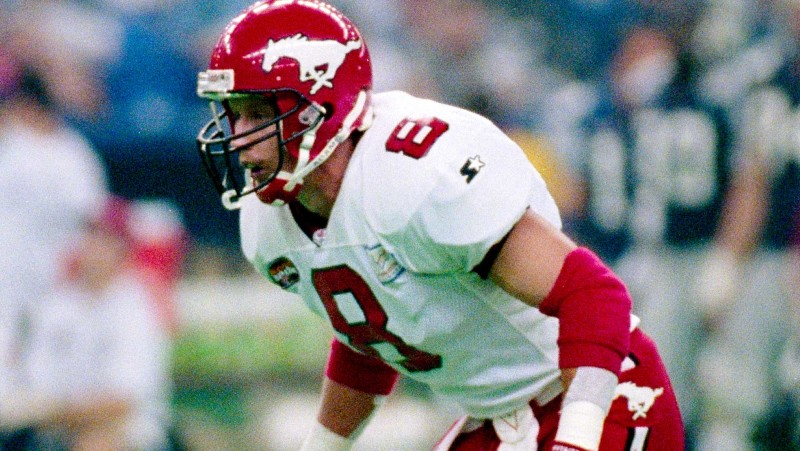 As a rookie – a sixth-round draft pick, no less – joining a veteran-laden Stampeders squad that was focused on winning a championship, Greg Knox wasn’t sure what to expect when he arrived in Calgary back in 1992.

“Walking into a setting like that,” says the Wilfrid Laurier alum, “and being wet behind the ears, you’re in survival mode early on more than anything.”

And this was a time when veterans didn’t see the need to make youngsters feel comfortable.

“Well, they all picked on us pretty good as rookies,” Knox says with a laugh. “It wasn’t long after that rookies stopped getting such a hard time. So I don’t know how much help (the veterans) were.”

Knox was eventually better able to take inventory of his surroundings at McMahon Stadium and the men who worked there, but only after he learned to cope with the trials and tribulations of being a rookie in the pros.

“As I was able to look past that,” he says “it was obvious to me that there was an enormous amount of talent and it was a great group of guys. That combination – the Canadians, the Americans, the coaching staff – it was just a good group.

“I think we had a lot of fun – I know I certainly did despite being a rookie. Just being able to line up behind guys like (all-star linebacker) Alondra Johnson and watch him run around was a treat.”

Many of the Calgary players who’d been around for a while have mentioned that a championship in 1992 felt inevitable after a close call the year before. For Knox, it was only much later he could appreciate the determination of that team.

“You take things like that for granted when you’re in the midst of it,” he explains. “I’m not certain I recognized it at the time but in hindsight, after being part of some strong teams over the next decade, you realize there were certain things that were driving forces. It was a team that had a lot of drive and a lot of character.”

A quarter-century later, Knox points to the obvious when asked about his favourite memory form 1992.

“The moment for everybody,” says the Peterborough, Ont., native, “was when you raise the trophy and you get to hold that above your head, especially when it’s such a driven and focused group.”

Knox was familiar with that feeling as he had won the Vanier Cup with Wilfrid Laurier in his final university season. Then, after starting his CFL career with a Grey Cup, Knox wrapped things up the same way as he was part of the Stamps’ 1998 championship team.

Knox’s best season in Calgary came in 1994 as he led the team with 10 interceptions and earned West Division and CFL all-star honours. His career totals included 22 interceptions — with a pick-six in 1994 — 210 tackles, eight fumble recoveries and four sacks.

He’s enjoyed great success as a coach, too. As defensive coordinator for the McMaster University Marauders, he went to three Vanier Cups in a four-year period, winning a title in 2011. After a season on the coaching staff of the CFL’s Winnipeg Blue Bombers, he returned to McMaster as head coach in 2016 and led the Marauders to a 6-2 record.

Two defensive linemen who played under Knox at McMaster are now members of the Stamps – Ben D’Aguilar and Michael Kashak.