This particular Calgary Fire Department Battalion Chief has an unabashed soft spot for the those out there on an altogether different sort of front line, also doing important work largely without fanfare.

“Special teams player-of-the-year for the Stampeders in, I believe, 1985,’’ reminded Stu Laird, pointing proudly to himself with hooked thumb.

“I played on special teams almost always. At least until the end. I don’t think they wanted me out there on kickoff returns by that time in my career.

“Special teams is one of those aspects of the game that’s easy to overlook because stats are hard to track.

“But as a player or a coach, you understand their significance.”

There’s no 75 on Laird’s uniform anymore. That changed long ago, a shade over two decades, in fact. The colour scheme has altered, too, somewhat more subdued than the red he used to model with such distinction.

Yet the ties remain.

So the announcement of a Calgary firefighters helmet to be awarded to the Stampeders special teams player of the game following wins holds a wonderful symmetry.

Early on Friday morning, before team meetings at McMahon Stadium, the initiative was announced by Laird and Calgary Fire Chief Steve Dongworth as a way of recognizing those under-the-radar Stamps flying down to smother Chris Rainey on a kickoff, say, or getting that key block allowing Roy Finch to unfurl his sails, catch the breeze and set course.

“There was,’’ reported special teams coordinator Mark Kilam, “a buzz in room when the guys were told.” Small smile. “Suddenly, everyone’s talking to me about what they do on special teams.” 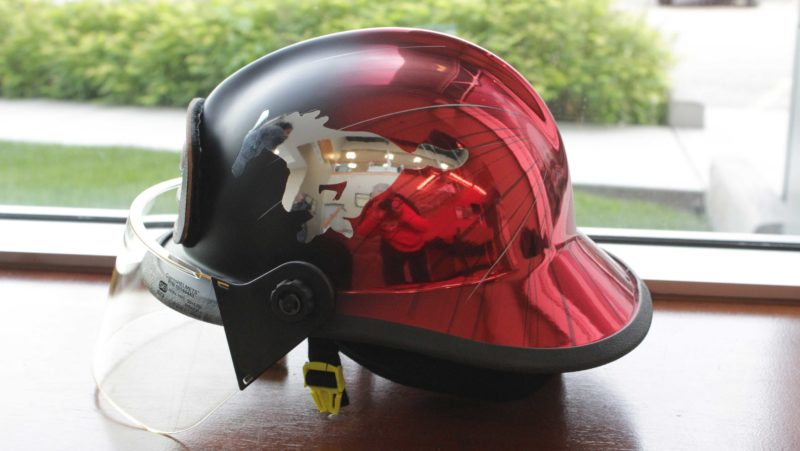 The Laird connection is a natural.

“Stu’s now a great ambassador for the Calgary Fire Department,’’ said Dongworth. “We’re real proud of him for many things. So we started to form this idea of a partnership with the Stamps because of the profile the organization has in the community, as do we.

“We have a lot in common. We both wear uniforms, we both wear helmets, we all rely on teamwork. None of us gets things done alone.

“It’s all about team, pride in the uniform, professionalism and respect. Those are the Fire Department’s core values and I suspect they resonate with the Stampeders, as well.”

For 13 seasons, the big man from Assiniboia, Sask., was a mainstay along the Stamps’ defensive front. A 1994 West all-star and in ’91 a Tom Pate Memorial Award recipient before retiring in 1996 to concentrate solely on firefighting, his name’s up there on the Stampeder Wall of Fame, of course.

“This is especially exciting for me,’’ Laird concedes, “because of the ongoing relationship I have with the Stampeders. Dave Dickenson is a former teammate. Huff (president and general manager John Hufnagel) was the offensive coordinator on our ’92 Grey Cup team.

“I have all kinds of special memories of this place, McMahon Stadium.

“We do an awful lot of training in the fire department. Same as football. You need to be as prepared as possible when called upon in both jobs.”

When asked what, if anything, he missed about the game after all this time, a bemused Laird replied:

“You know what I do miss most? The people. That’s another reason the fire department has been such a great transition for me, personally. You don’t have a locker room but the fire station is the same kind of environment.

“The camaraderie, the brotherhood/sisterhood we have within the department reminds me of a football team. In both jobs, you build relationships that last a lifetime.”

The kinship between the Stamps and the Calgary Fire Deparrment only strengthened now by the introduction of the Firefighters Helmet Award for special-teams excellence.

“It’s something,’’ Kilam emphasizes, “that I’m incredibly proud of. Our players, too. The Fire Department preaches team before self. Trust and respect. That’s everything we aspire to be on special teams.

“A lot of our guys do unheralded work on the field. For some, like our returners, to get recognition, there’s 11 other guys working in front them.

“This fire hat represents that.

“We already give out offensive and defensive game balls after games.

“So this is a way to recognize special-teamers in front of their peers, which I think is outstanding.”