McManis is next man up

McManis is next man up

Wynton McManis during his first game with the Stamps on July 7, 2017

Already low on defensive linemen entering Friday’s game against the Winnipeg Blue Bombers, the Stampeders felt the pinch when Kashawn Fraser went down on the first defensive play of the game.

Then, when newcomer Aston Whiteside exited the game with a malady of his own, the Red and White turned to an unlikely player to fill in at defensive end, linebacker Wynton McManis.

“We even had to play a linebacker at defensive end and he gets two sacks.” chuckled head coach Dave Dickenson.

While it wasn’t the ideal scenario to see what the 22-year old rookie could do, there wasn’t a whole lot of choice.

And the head coach liked what he saw.

“He said he was tired,” Dickenson said. “He only got here a couple weeks ago. We wanted to see what he could do. We feel that he’s a pretty good linebacker as well. He did a lot for us. I don’t think he’ll make a living down there on the defensive end but he’s good on special teams and he’s got great effort. You can tell that he’s a football player and for him to step in like that, we needed it and he did a good job.” 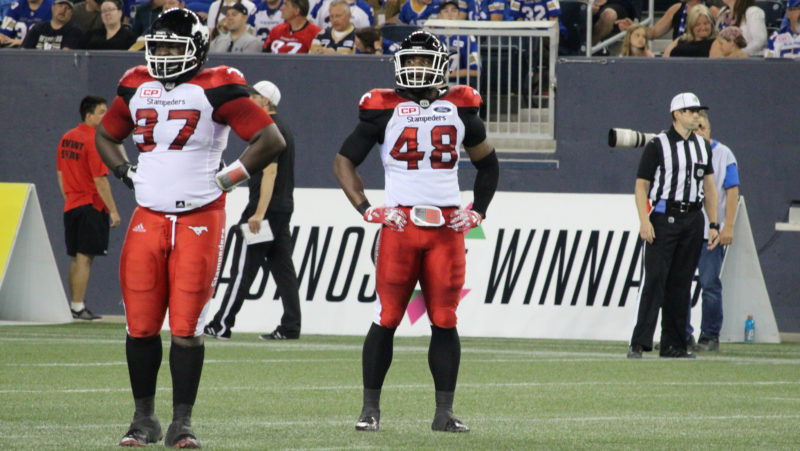 McManis signed with the Stamps on June 17 and spent the first two weeks of the season on the practice roster.

While the coaching staff was happy with his efforts and fans were impressed by his two-sack performance, McManis wasn’t ready to give himself a high grade.

“I guess going by the sacks everybody thinks that I had a nice game but honestly, grading myself, I feel like I could have done better,” he humbly said. “It’s always good when you come out with the win, but there’s always things you can get better at.”

The 6-foot-1, 225-lb. Memphis product saw plenty of action in his first CFL game, but not at his regular position.

Also considering that Winnipeg’s offensive line members average 6-foot-5 and weigh in at 319 lbs., it makes his big day even more impressive. So how did the physically overwhelmed ‘lineman’ handle the new assignment?

“Actually (practising) here in Calgary, with the higher altitude, it helps with being more prepared for times like that,” explained McManis. “It was tough, but I think I did pretty well at handling it.

“Over the years, you kind of prepare for moments like this. You’ve got to be ready for anything that happens on the field and be that next man up.”

Coming into the second half of the game with the Stamps trailing the Bombers 10-9 in the loud surroundings of Investors Group Field, the Red and White needed someone to step up.

And McManis’ two quarterback crunches in the third quarter helped light a fire that pushed the road team to victory.

“We needed a spark,” said McManis. “So I think each player tried to take it upon themselves to bring that for the team, and I did my part. It’s a good feeling. Your teammates kind of start to see you and notice you and it feels good to help your team out.

“I’m excited to play more and continue my years here in Calgary.”