Alex Singleton during a game in Ottawa on June 23, 2017 (Photo by Scott Grant)

The Stampeders linebackers have played a crucial role for the team so far this season.

One is tied for second in the league in tackles.

Another has a pair of touchdowns.

And one even balled out with two sacks on the defensive line.

No matter the job, no matter the situation, this group has been vital to the team’s strong start in 2017.

“I think everyone is stepping up big on special teams and playing defence,” said second-year middle linebacker Alex Singleton. “The young guys are playing all over, not just on defence but on special teams as well. Shoot, we’ve got a long snapper that also plays linebacker. But Riley [Jones] stepped up huge being able to play long snapper and [Jameer] Thurman is all over the field and when [Dexter] Janke was healthy, he was flying around. Having [Deron] Mayo in the room coaching the young guys up, that’s huge. It’s been a good group so far.” 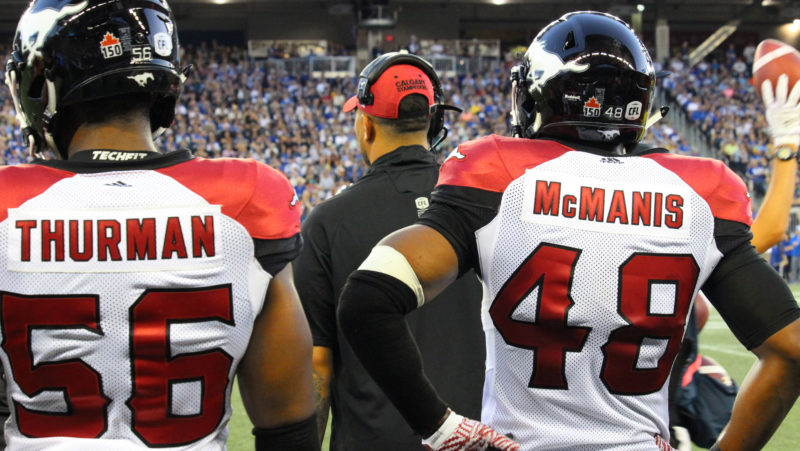 Linebackers Jameer Thurman and Wynton McManis during a game in Winnipeg on July 7, 2017

Linebacker coach Brent Monson is pleased with his group’s performance through four games, but he realizes that there’s still room to grow.

“I think they’ve been playing pretty well. I mean, we all have to get better, there’s a lot of areas for improvement for the whole defence.”

An easy way to get better would be to get back last year’s defensive captain Deron Mayo, who is currently on the six-game injury reserve list.

In the meantime the active players will keep working hard and gleaning as much knowledge as they can from Monson, Mayo and the other coaches.

“Just practise and as much film as possible,” Singleton said. “Know who you’re playing, because if you know what they’re going to do, it makes your job easier to fly around and be fast.”

If this group of skilled linebackers continues to improve, just how high is their ceiling?

“As high as they want to make it,” declared Monson. “The more work and preparation they want to put in, the better they’ll be.”