OL Spencer Wilson after scoring a two-point convert against Hamilton on July 29, 2017 (Photo by David Moll)

I thought I played well tonight. I thought the whole offensive line played very well, giving the quarterbacks — all three of them got protection and all of the running backs got touches, so all around it was a good game for our offence.

Dan Federkeil taught me up on how to run the trick play. I ran the route properly. We brought in another o-lineman, Cam Thorn. It’s a bit of a confusion play. I’m lined up in my left tackle spot and Cam is ineligible and I have reported eligible. Now we have an extra guy to the field and I’m eligible two away from the centre. I sold the pass protection for a second and faded. I was wide open and Bo threw a great pass and it was an easy catch.

The Tiger-Cats defence realized that I was eligible because I heard two defenders calling me out and they both said that they had me. So essentially, I beat double coverage! 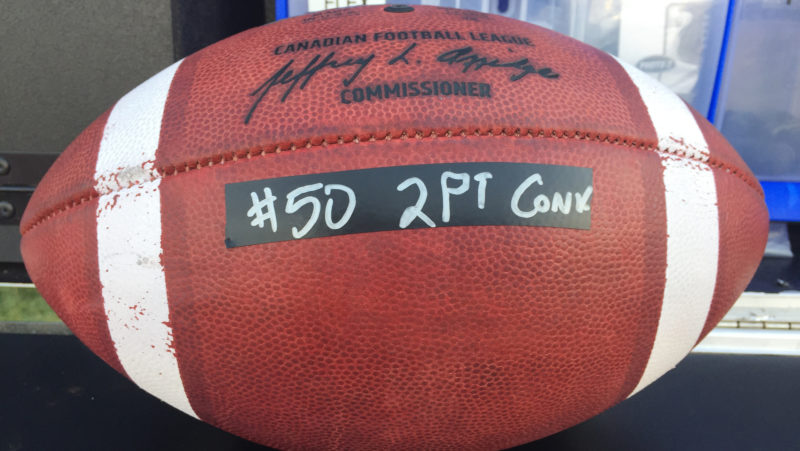 I was a little nervous before the play. I remembered to report, that’s the thing that I was most nervous about. That would be silly if you ran the play successfully and didn’t report. Once the play was over and I knew we weren’t going to go back to it — it’s a one time and done thing — my nerves came down and I was able to relax.

I’ve been playing football since Grade 5 and I have never caught a pass before. Ever.

It’s awesome to do that in front of the 1992 Grey Cup championship team. Any time we can do that at home and put on a show like that, especially to put on a show for our idols here watching us, it’s a great feeling.