It’s A Snap Blog: Ladies of the Stampeders

It’s A Snap Blog: Ladies of the Stampeders

For today’s blog, I thought I’d take a look at football from the other side. No, not the Stamps’ opponents, I’m talking about the support system, the cheering squad, the holders of the fort, the soundboards when things go right and wrong – the wives and girlfriends of the players.

To us as fans, football players are athletes who we expect to perform at their top ability on a weekly basis. Generally, we see them for a few hours a week during a game and, let’s be honest, can be judgmental of how they are playing.

But we as fans need to remember that football players are people, too. And who better to know them truly as both professional athlete and regular human being than their spouses?

The Ladies of the Stampeders is a super group of football wives and girlfriends who come together to support each other and volunteer in the community, all while taking care of their families in the tumultuous atmosphere of football.

Sound glamourous? Perhaps at times, but let’s not forget what comes with life alongside a professional athlete. Trades, cuts, injuries, losses, getting benched . . .

Lucky for me, Maryse Daze-Wilson (newlywed of O-lineman Spencer Wilson) agreed to open up about life on the other side of football – in the stands and at home as a football spouse. 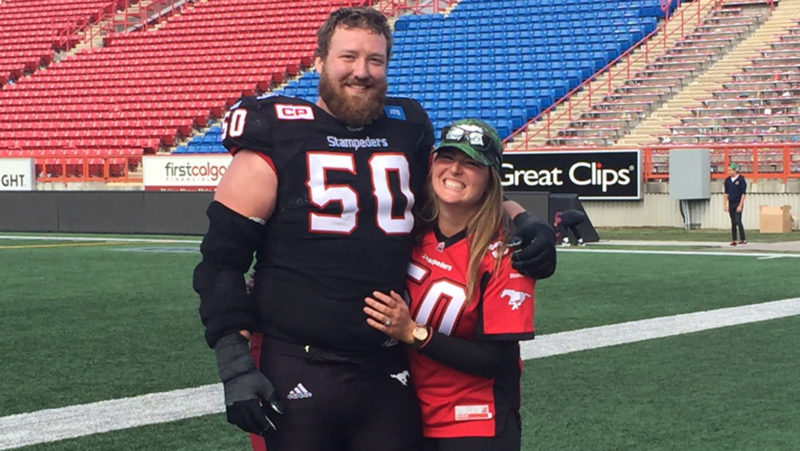 Alanna: Let’s jump right to it, what do you think the biggest misconception of a football wife or girlfriend is?

Maryse: I think definitely the biggest misconception is that we show up to the games in cute outfits with cute babies and we go home and all is well. There’s a lot more to it. There’s bumps, bruises, injuries; the highest highs when you win and the lowest lows when you lose.

A: Speaking of highs and lows, how do you approach the roller coaster that is a football season?

M: The losses are hard and I think because the Calgary Stampeders have held themselves at such a high standard, we’ve been spoiled . . . so a loss is hard but the wins are incredible. For us, we’ve been fortunate for a while to have been healthy but we’re injured right now. You just have to take some things one day at a time.

A: Everyone has bad days but a bad day for a professional football player could mean injury or losing a championship. How do you deal with the bad days?

M: It’s whatever they need you to be on that day. If they need to get it out, then you help them get it out. When you look at it closely, this is like their business. They go to work from 8 a.m. to 3 p.m. every day, they go get treatment, they go to meetings, they learn the new plays, they practise, they make mistakes, they fix them and then they go out again the next day and do it all over again. Whatever the bad day may be, you deal with it as it comes and, for us, we deal with it with a lot of positive talks and a lot of love from our friends and family. 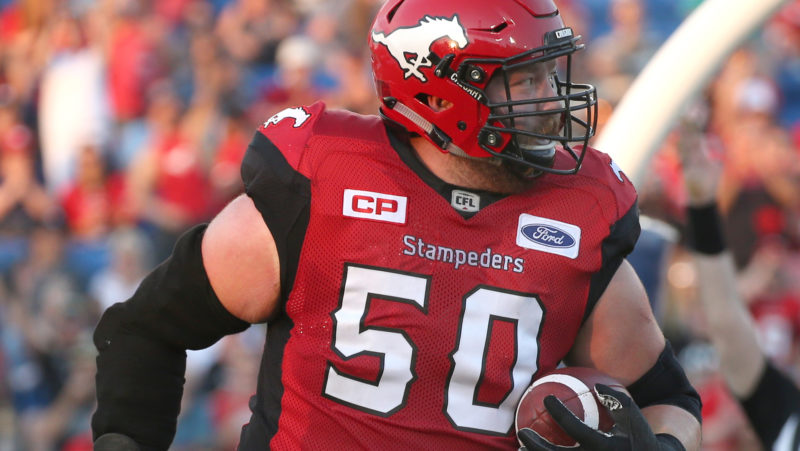 A: How rewarding is it to see them succeed?

M: It’s amazing. You’re so proud. Spencer scored a two-point convert earlier this year and we have the ball displayed in the man cave. To see the excitement after something like that, it’s just outstanding.

A: The Ladies of the Stampeders is a group you were instrumental in getting off the ground. Tell us a bit about what that group does.

M: We just saw the need for a good gathering of the wives, especially for the ones who were new to town. So we started the Ladies of the Stampeders as a group that just gets together before the games, we volunteer together in the community and just really support each other. It’s incredible when a group of women get together what we can accomplish. If someone gets hurt, we’re there, ready, willing and able to be at their house to take care of the kids or bring meals or whatever they may need. It’s pretty amazing who you discover when you take the time to discover them.

A: How important is it to have a support group like the Ladies of the Stampeders, especially for families who are new to the city?

M: Some people come to this city and they don’t know anyone, they’re here on their own and the boys are at football all day and every day and they get home and they think about football every day and all day for most of the year. So to have a support system when things are great and you want to celebrate and when things aren’t great and you need a shoulder to cry on and don’t want to necessarily go to your husband or boyfriend and you just need someone to talk to, that’s what the Ladies of the Stampeders are all about.