Maver: I’m taking this one for punters

Maver: I’m taking this one for punters

It was just an all-around solid game for myself. There were some really good punts and there were a couple that I’d like back, but you’re rarely going to have a perfect game.

That whole non-punt play is tough to describe. I felt the defender right on top of me – just hold it and the first thing I did was make sure I can get around the corner. Then I saw the first-down marker and I said, ‘Oh, I can get there.’ That’s when I started laughing. A lot of people told me I was running. I blacked out.

Rob Cote was basically right on a guy and I thought that I could turn the corner. He just got in between. It’s tough to say exactly what he did to be honest because I just saw him get in-between me and the defender and then I just took off towards the sticks.

Patrick Levels jumped on me at the end of the run, but I was so tired by that point. I haven’t run 40 yards since the combine. That was eight years ago. I’m in my thirties now and I’m not built for that kind of sprinting, but it worked out. An object in motion stays in motion, so there was no stopping me as I ran down the sideline out of bounds toward the endzone. 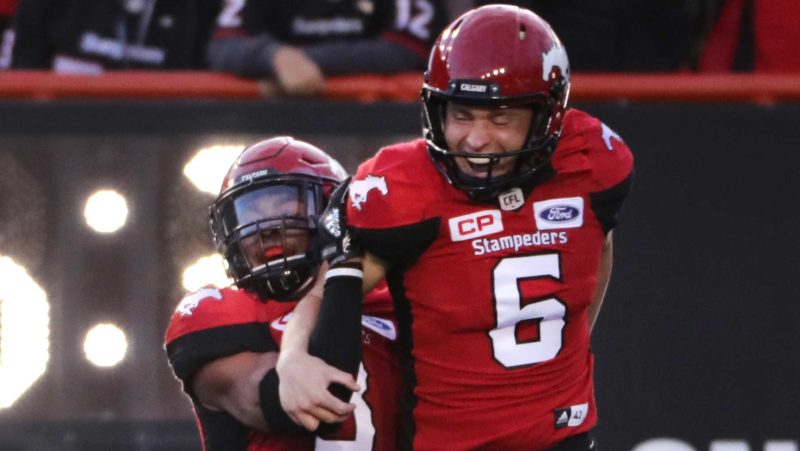 Anytime that you’re able to prevent something bad from happening and turning it into a positive, that’s great. That play was just as much of a fluke as it was me making a play.

I’m taking this one for punters.

It’s West Division, so it’s a huge win. Anytime you can get a win against a division opponent is big. The West is a dog fight this year, so the biggest thing is that we just got our 10th win. We’re going to be focusing on beating a very good Saskatchewan team next.

Winning our eighth game in a row, it’s great. We have great fans and this is a great organization. Not a single day passes where I’m not thankful and appreciative for my opportunity to play for this football club because I know how special it is here. The reflection of how great it is here is shown in our record.