Make it a perfect 10 in row: the Stamps simply refuse to lose.

The Stampeders more than redeemed themselves for a Week 4 loss in Montreal by wiping out the Alouettes 59-11 at McMahon Stadium on Friday night and coming within four points of setting a new single-game franchise record for points scored.

Now at 12-1-1, Calgary has won each of their last 17 home games and secured a 48-point margin of victory in front of their fans for the second time this year. The Red and White put up 60 against Hamilton back in late July.

All in all, over 520 yards of offence were posted in the triumph.

“We need to win at home and we’re still getting pressed hard in the West,” explained head coach Dave Dickenson. “Every win you can put on the board to me is that much closer to getting you that bye and that home playoff date.”

Making his first professional start, Terry Williams was the star of the show, as the rookie running back filled the stat sheet with 156 rushing yards and three touchdowns on just 16 handoffs.

In addition to the Kutztown, Penn., product, visits to the endzone by Anthony Parker, Rob Cote and Tunde Adeleke helped Calgary to the victory. 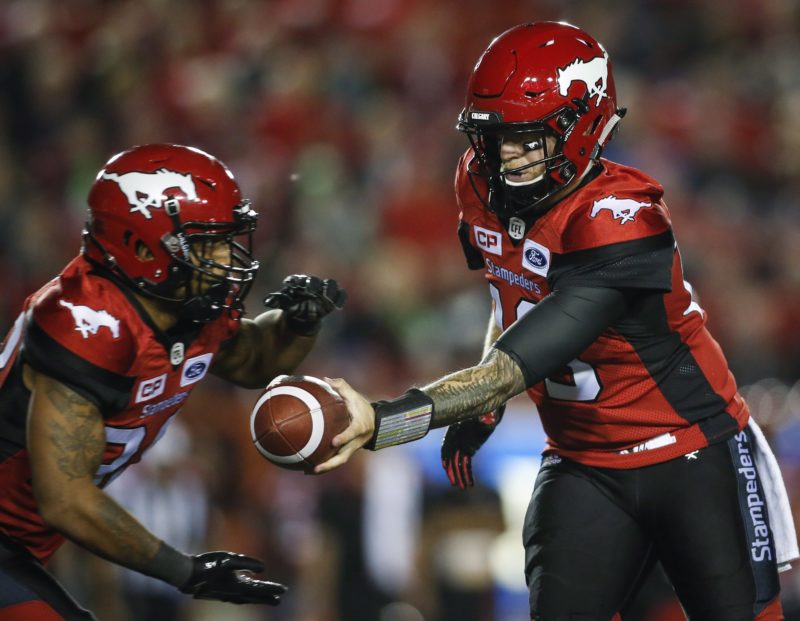 “I felt like we had a lot of things that could have gone wrong,” Dickenson revealed. “It was a short week, we were playing a team that everyone was saying we should beat and we had a bye coming up. I felt like our guys had a chance to maybe go on vacation early and I really tried to harp on them and keep them ready and push them. The thing I love about that as a head coach is that these guys respond. When they respond to you and they’re still listening at this point of the year, that’s a good thing. They put a good performance out there.”

The game’s opening kickoff was not returned out of the endzone and Rene Paredes knocked through a 32-yard field goal before a touchdown was on the board. It was Paredes’ first of five field-goals on the night.

Following six unsuccessful tries inside the Als’ 15-yard line, Williams squeezed his way into the endzone on the final play of the opening quarter for his first CFL score. A reception for 18 yards by Reggie Begelton, a 19-yard end-around by Parker and a grab by Marken Michel of 23 yards were the other notable pickups in the opening frame.

In the second stanza, Michel raced along to sideline to haul in a 43-yard toss from Bo Levi Mitchell and set up the second trip to pay dirt for the home side. Marquay McDaniel also made a catch deep downfield to set up a score with his play going for 49 yards down to the two-yard line.

Both McDaniel and Michel would finish with over 100 receiving yards in the one-sided outing.

Cote’s first TD of the year – a 12-yard catch-and-run – and Adeleke’s second punt-return score in 2017 preceded Williams’ longest play of the night, a 45-yard sprint up the middle to cross the goal-line yet again. 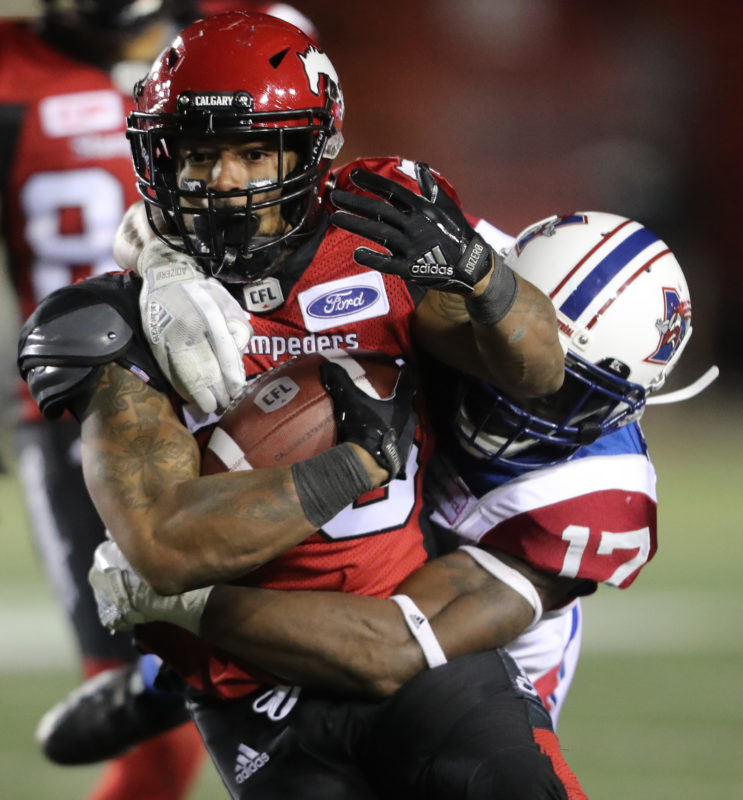 “We thought we had something in Terry,” offered Dickenson. “He’s been dynamic in practice and we needed to get him in a game. He was good tonight. He was fast and ran hard and I will give credit to our offensive line and the receivers blocked well, too. But as you saw, he’s a good player and a guy that we think we can build with as well. It was certainly a good performance for him.”

As for Montreal, Boris Bede would split the uprights from 28 yards out to temporarily pull within seven. With 34 seconds left on the clock before the break, a bust in the Calgary coverage enabled Tyrell Sutton to scamper in for their one and only touchdown.

Starting in place of the injured Darian Durant, the Alouettes’ Drew Willy completed a mere 13 passes before being pulled in favor of Matthew Shiltz in the third.

Multiple quarterbacks saw time for the Stampeders as well with the insertion of Andrew Buckley when the game was out of reach.