Williams is centrepiece of Calgary o-line

Williams is centrepiece of Calgary o-line

Offensive lineman Ucambre Williams during a game on June 29, 2017 (Photo by David Moll)

If you believe you’re the best, you become the best.

It’s all about how much you trust in your game.

Stampeders offensive lineman Ucambre Williams followed this mindset and took it upon himself to prove that he could be one of the top centres in the league.

“The biggest thing of my game is confidence,” Williams said. “If I dig down and have confidence, I know I can go out there and play. It helped me to be consistent and pay attention to the details.

“It’s been a great journey and I’ve appreciated every bit of it.”

The 25-year-old came into the year competing for a spot at right tackle but found himself transitioning to centre when injuries took a toll on the offensive line.

Despite the position change, Williams was able to adjust and thrive to his new spot in the lineup and on Wednesday was named as the Stamps’ nominee for the CFL’s Most Outstanding Offensive Lineman award. 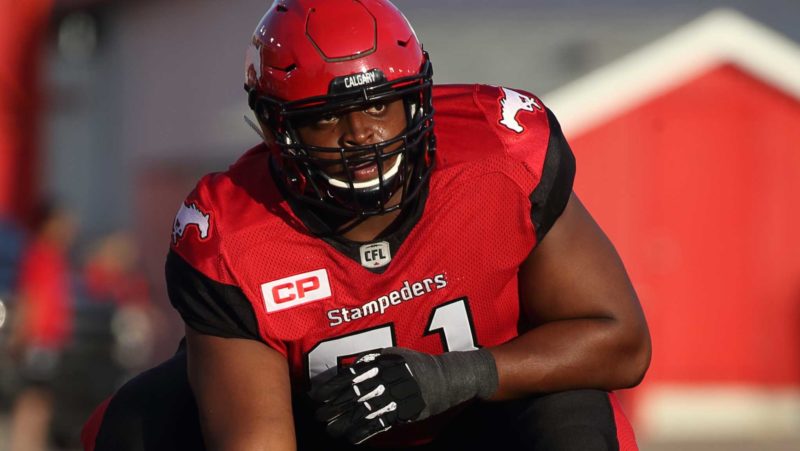 “I didn’t know if I would play too much but here we are in Game 18 and I’ve started (all 17 previous games),” Williams said.

“Coach Pat (DelMonaco) and my teammates have helped me get to where I am. They all have believed in me and helped me stay the course. As long as you stay on that course and even keel, you’ll be fine.”

DelMonaco knew that the Phenix City, Ala., native had the potential to break out the minute the position change was made.

“He’s gotten better each week,” DelMonaco said. “We’re really excited for him to continue to grow as a player.

“He has the right mentality to continue to improve and achieve what he wants to accomplish.”

The offensive line all season has given quarterback Bo Levi Mitchell time in the pocket to operate and open up holes for running back Jerome Messam. The unit’s strong and consistent play has been a major reason the team sits first in the West Division with a 13-3-1 mark.

With the regular season down to one final game – Friday’s home date with Winnipeg – and playoffs fast approaching, Williams wants to head into the post-season on a high note.

“We had a couple down weeks (back-to-back losses in Weeks 18 and 19) but we’re getting ready for playoffs,” he said. “That’s where it all counts. The main focus is to come together at the right time as a team.

With a combination of his confidence and play, there’s another level to his game yet to be seen.

“I know I can still get better for this year and the next. My game will only go up from here.”