To say that last game of the regular season on Friday night at McMahon was a cold one is an understatement!

Huge props to everyone who braved the elements and stayed to cheer on the Red and White.

While you were sitting in the stands (or watching the game on TV from the warmth of home) did you ever wonder what impact the elements have on the players? I had a chance to ask some of them about that before and after the game.

Patrick Levels is a rookie from Dallas. He told me before Friday night’s tilt that the coldest Dallas gets is about -2 degrees Celsius. At game time, it was -24 with the wind chill.

Luckily (if you choose to see it that way), the players were able to practice in similar conditions throughout the week and get somewhat acclimatized.

“I’m glad it actually did snow and get cold before we played so I could get adjusted to it. It did help out a lot,” said Reggie Begelton, another Texan who had never played in the cold and snow before Friday’s game.

“I found it very, very cold. It’s something I’ve never experienced before. So it was something I had to adjust to on the fly. You have to be more technique-sound because if you’re out of control you’re pretty much going to slip no matter what.” 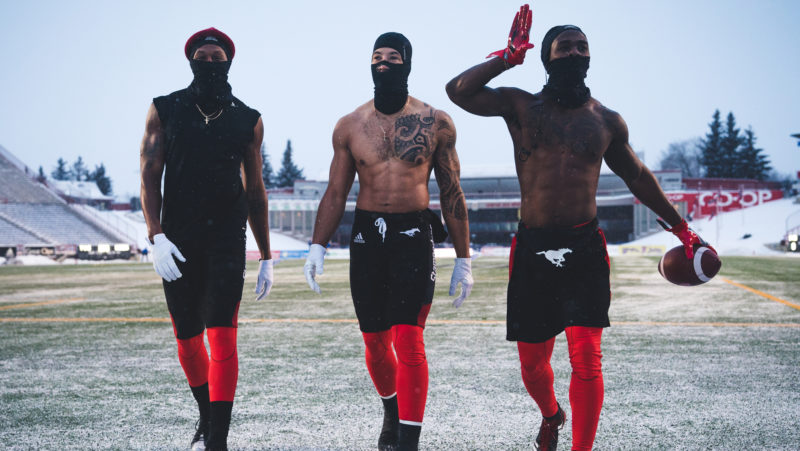 But what about the football?

Punter Rob Maver explained how the cold affects the pigskin.

“When you kick the ball in normal conditions, the ball compresses and then bounces off your foot and when the weather becomes very cold, the ball loses all of its elasticity so there’s no rebound when you’re kicking the ball,” he said “It’s like kicking a brick.

“You just really got to focus on clean contact because it’s not forgiving at all. If you don’t hit it pure it’s not going to go anywhere. I think we broke two bladders of the footballs in pregame. And I think one of them died in the game.”

“The colder it gets, in general, the less reactive the ball is going to be but as soon as you get a little bit below freezing is when it becomes really pronounced.”

Oddly enough, last game was not the coldest outing of the year for everyone.  Multiple players told me the Sept. 24 game in Saskatchewan – when the weather was windy and raining – was far colder than the Week 20 matchup with the Blue Bombers.

“It actually was worse because you were wet,” added Begelton. “The fact that you were wet and with the wind chill made it a lot worse.”

So let’s all pray for dry, possibly warmer conditions for the Western Final on Nov. 19. You can purchase your tickets here and show your support of the Red and White one last time at McMahon this year.