Outstanding rookie back in the lineup

Outstanding rookie back in the lineup

We’ve reached that fish-or-cut-bait moment when identities are forged.

When reputations – both good and bad – are etched in imagination.

“Games like this can go a long way in defining a player. I know that. So I’m definitely excited about the opportunity to go out, win the West and advance to the Grey Cup. Definitely excited to be able to showcase my abilities stepping onto a bigger stage.

“But I’m relaxed, too. You have to be. You think too much about what’s at stake, get too wound up, and you can do yourself harm.

“I’ve been playing football since I was nine years old. And I’ve tried to treat every single game the same.”

This certainly has been a breakout season for the 24-year-old, Florida-born product of the UMass Minutemen program: Forty-one catches, 780 yards and three TDs in 13 games – 11 of those starts. The Most Outstanding Rookie selection first for the Stamps, then the entire West Division.

Michel unquestionably ranks among the ‘finds’ of 2017.

“When you’re a kid in your backyard,’’ says Stamps’ receivers coach Pete Costanza, “it’s either the Super Bowl and you’re Tom Brady, the World Series and you’re Reggie Jackson or the Stanley Cup final and you’re Sidney Crosby.

“You’re either throwing or catching the deciding touchdown pass, hitting the winning home run or scoring the overtime goal, right?

“We all grow up dreaming of shining in the brightest spotlight.

“All great players in professional leagues, this is when they embrace the moment.

“You always hear people asking: ‘Is he a playoff-type guy?’ Well, the way they get there, to be that playoff-type guy, truthfully, is because those players play big games as just another game. They aren’t, of course, but they treat them that way.

“You hear people say sometimes: ‘The stage was too big for him.’ Well, that’s only if you allow it to be.

“Marken’s demeanour hasn’t altered all year. He’s the same even-keel kid, then to now. I think you’re going to see him go out there, get chances and when those chances arrive, he’s going to go to work and let his athletic ability take over.” 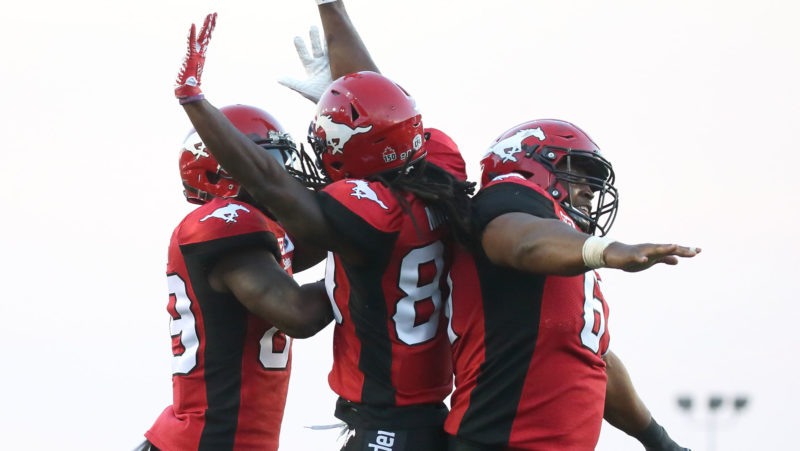 Michel and his teammates celebrate a touchdown (Photo by David Moll)

One of the old hands of the receiving staff and a proven playoff performer, slotback Marquay McDaniel, has tried to counsel the young bucks on how to approach and seize the moment.

“As a receiver, your mentality has to be: ‘I want the ball.’ You can’t shy away because it’s a bigger game or a brighter stage. You can’t retreat into the shadows.

“I remember when I was young, Dave Stala was big for me in that regard. Then Arland Bruce III came. He was more kinda like me, a lead-by-example type guy. But the same message: Use your abilities.

“I tell the younger guys now what they used to tell me: ‘You’ve just gotta play football.’

“(Michel) has all the tools. But you don’t know until you get out there. That’s the crazy thing. What you did in the regular season literally means nothing now. How you show up on Sunday, that’s what you’re ultimately judged on.

“He’s been locked in all week and when he got the opportunity this year, he stepped right in and ran with it.

Sunday, that special time for identities to be forged, reputations etched in the imagination, arrives.

“Honestly?’’ says Michel. “I feel the same as I did Day One of training camp. I feel like I have to prove myself, regardless of the accolades or how anyone thought my season went.

“You don’t want to get complacent, too comfortable. That’s when things start to unravel.

“Right now, it’s playoff time. The most important time. The time you need the confidence to step up and make plays. The time everybody’s watching.

“I feel good. I feel prepared.