OTTAWA – Niceville is a town of 12,000 in Okaloose County, Fla., situated on the Boggy Bayou that opens into Choctawhatchee Bay, home of the locally renowned annual October mullet (the fish, not the hairstyle) festival.

John Hicks, now 32 years in charge of the football Eagles, had already been coaching at Niceville High School awhile when one day, nearly a decade ago, the mail delivered an unexpected surprise.

“I received a highlight film,” Hicks is reminiscing, with a rolling laugh, “from this kid who was moving back to Niceville and wanted to know if I’d be interested in him playing for us.

“Said his name was Roy Finch.

“I watched about four clips – that’s all I needed – and I went ‘Oh, boy! Oh, boy! We have got ourselves a player!’

“Can’t take too much credit, though. Doesn’t take long, y’know. Roy was a human highlight film at that time.”

Roy Finch is a nominee for the CFL’s Most Outstanding Special Teams Player Award and will be at Ottawa’s Shaw Centre Thursday night hoping to hear his named called.

He’s promised to keep the acceptance remarks short if he wins. There are, however, people to thank, for getting him to this point in his career.

John Hicks chief among them.

“Coach Hicks,’’ says the Stamps’ powder keg of a return man, “has played an integral part in my success, from the high school jump to college and then college to the pros.

“He pushed me my junior year, telling me I needed to run between the tackles more, to show college coaches I could do that. He also knew that’s what was needed to get the team to the state championship.

“So he put a lot of pressure on me as an 18-year-old kid because he understood I could handle it. He wasn’t shy about putting a lot on my plate. He didn’t treat me like a baby.

“He wanted me to grow up, mature, as a young man, not just a football player.

“He taught me about integrity, about your word being your bond, about being the first one in and the last one out, about being a guy your family, your teammates and your community can count on.” 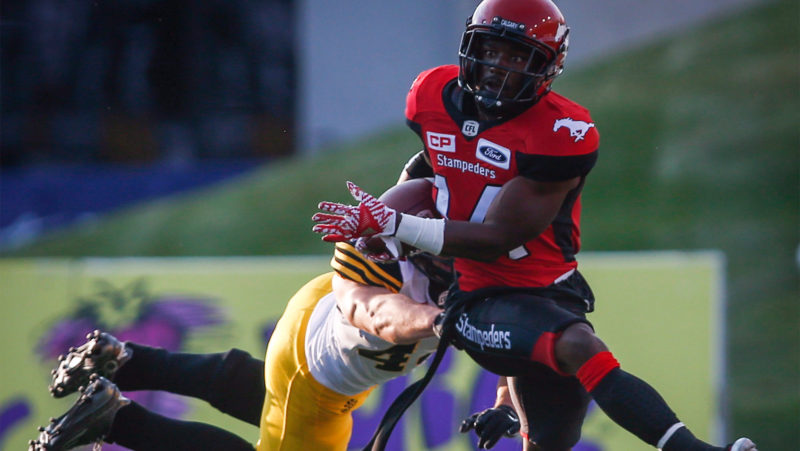 Right away those traits, the seamless shifting of gears, that Maserati pick-up, the unteachable ability to leave bamboozled tacklers scattered in his wake that Stampeder fans have so fallen in love with the past two seasons, manifested themselves in Niceville.

“Roy could change direction better than any player I’ve ever seen, before or since,” says Hicks. “The first time he touched the ball for us, I’ll never forget, he was running a jet sweep and made a 90-degree turn over the guard.

“That play’s designed to go right out to the hash but he cut it back over the guard and broke it, like, 50-something yards, made four people fall down.

Roy Finch embraced his time at Niceville High. He led the Eagles to that state championship. One year, he was named prom king.

“A lot of great memories of that place,’’ says Finch warmly.

“The prom dance was so weird, though. Out of nowhere they started playing this love song and everyone else circled us, me and the prom queen. Sandy, was it? Or maybe Becky. Can’t remember …

“Anyway, You’re supposed to dance. I already had a date. Didn’t want to put her in a bind, right?

“I don’t remember the song but I do remember the moment. I danced with (the prom queen) for a little bit and then it got real awkward.

Bet that the Argo cover team won’t make life as uncomfortable for Finch as that long-ago dance did. Coach Hicks hadn’t schooled him on that kind of pressure.

The two men don’t see each other much these days. Doesn’t matter.

“I haven’t spoken to him in a while but that relationship, man, stays strong,’’ says Finch. “I’m sure you have someone in your life you might not speak to for a year or two, then you pick up the phone and it’s like you never left.

“You never forget the good things that people have done for you along the way. So many things Coach Hicks, and my uncle Corey – who’s pretty much my legal guardian – did back in the day, that I didn’t understand then, but do now.

“Sometimes the hardest thing is doing the right thing.

“Coach Hicks pushed me to become a better person. I had a lot of character flaws growing up, coming from where I did in Maryland, real rough, real gritty.

“I went to him as a 17-year-old kid and he groomed me to become a man of integrity, who works hard, doesn’t complain.

“That’s what he preached: Just go to work. Go to work and do the best you can at your job that day. If you do that, you’ve done well.

Business like Sunday’s. From afar, his mentor will be tuned in to ESPN2.

“People in Niceville still like to talk about the things Roy Finch used to do on the football field,’’ Hicks tells you. “He was someone you’d pay to watch play.

“Every time I can see him on TV, I try to watch. Usually someone will call me or text me and say ‘Hey, Roy’s game is on.’ It’s not just me. Everybody in town likes to keep up with Roy.

“Tell him good luck on the award and the game. We’re all proud of him.”