Nothing more than a try-out. A look-see. The proverbial we’ll call you.

With all its inherent uncertainties.

And for someone so renowned for giddy-up, Roy Finch got off to a slow start.

“My grandma Doris drove me and I remember being a little late,’’ Finch was reminiscing of his audition for the Stampeders.

“But late enough that I had to get my cleats on in a hurry so couldn’t really warm-up like the other guys.

“Once I put those cleats on, though, I had a great day.

From discard to wild-card.

From the margins of the game to the stage of the Shaw Centre and the CFL’s Most Outstanding Special Teams Player Award for 2017.

Grandma Doris was in the audience when Finch picked up his hardware.

“I want to thank my family, thank my lovely grandmother over there, Doris Louise Finch, for always being my rock,’’ he said, opening his acceptance speech.

“All year she would call me: Are you in your place. Are you spending too much money. Are you staying out of trouble. And I’m like ‘Grandma, I’m good, I’m good, I’m good.’ She’s everything to me. I grew up without my father, since 15. My grandfather taught me football. My grandma taught me about love and caring. I’ve always kept those values close to me.

“I wouldn’t have this award without my teammates. I knew coming into my second year I’d have to step up my play for us to get back here.

“I’ve been winning individual awards all my life. A lot of people don’t like to speak about their humble beginnings, like everything in their life is fine, everything’s perfect, they got this.

“After college, I was humbled. I had some personal issues, character flaws. I was let go by Ottawa. No hard feelings.

“God humbled me, sat me out a year. But I stayed in shape, tried to be positive, because football is life. 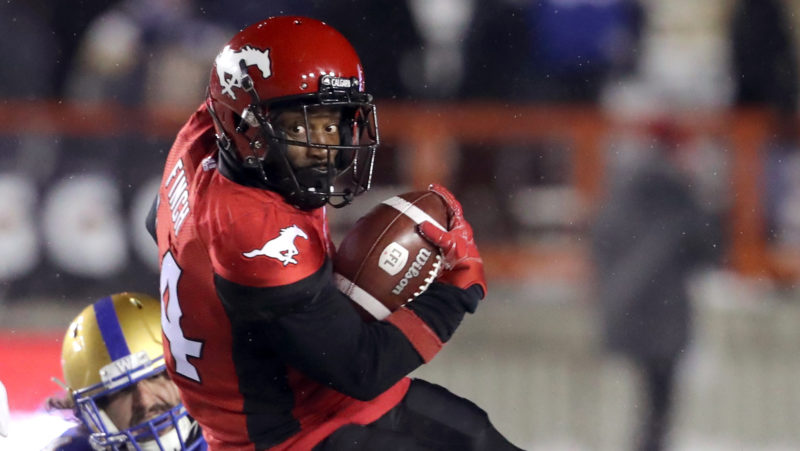 “Roy’s come a long way. He was on the street. We brought him to Florida with four other returners. He came to camp, won a job.

“That was two years ago and he’s continued to develop continued to grow within the structure of our organization.

Finch, as Stamps’ aficionados can vouch, doesn’t so much require a launch point as a launch pad.

The former Oklahoma Sooner topped the CFL, piling up 1,896 return yards on punts and kickoffs. In Year 2 in Red-and-White, he eclipsed his own franchise record of 993 yards on punt take-backs, piling up 1,200 yards and three TDs.

Stamps’ safety Josh Bell has slapped Finch with a nickname: The Bus Driver.

“Because,’’ explains Bell, “anyone that tries to tackle him, coming straight up, they’re gonna get dropped off like they’re on public transit.

“Not at the stop they fixing to get off at, either. Uh, uh. Only where The Bus Driver decides he wants to drop ’em. It is his bus, after all.

“Roy also kinda reminds me of Pop Rocks. Never had Pop Rocks? That little candy you had as a kid, put ’em in your mouth and they kind of explode, and crackle?

“Full of sugar, those things. Sweet as can be. They give you a jolt. Same as Roy.”

“But it’s hard to pick just one description. There are too many to pin him down to one. Roy brings too much to the table.

“Larry Taylor was pretty good back in the day. But I think Roy, because of everything he brings – his vision, his toughness, his willingness to get vertical, that good energy, so well-liked in the room – is the best one I’ve been around.”

On Thursday, Roy Finch reached the top of his profession.

“I’ve always had this gift. It’s how I express myself, on the field.

“It feels like a dream. Because I remember late nights, lonely nights, all by myself, wondering if I’d ever get the chance to play again.

“Ever get the chance to express myself the way I know best, do what I love to do best.

“Now I’m here, with this team, a family, and I couldn’t ask for more.”

In closing on stage, Finch said:

“One thing I want to leave with you guys. If you have a dream and you want to reach a goal and get somewhere, don’t give up.