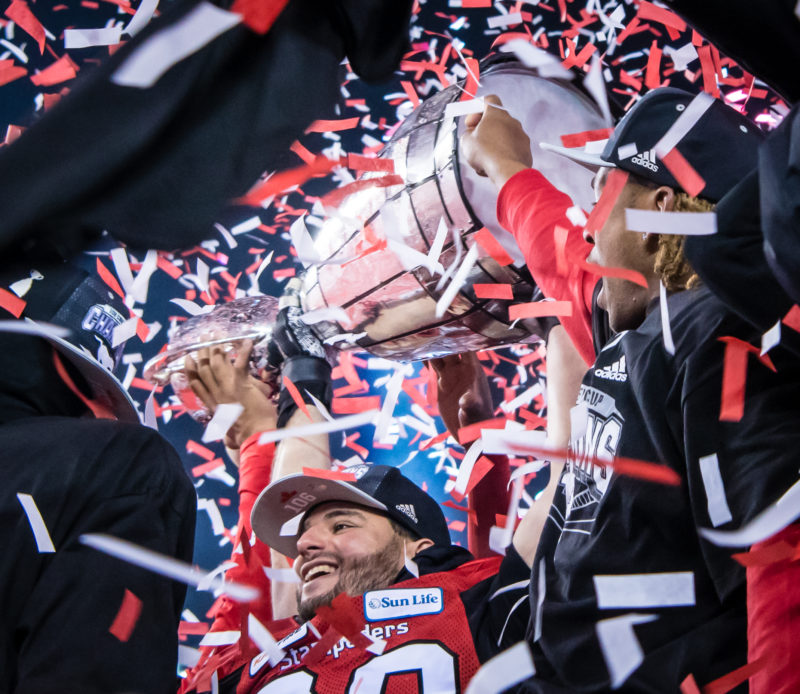 On a frosty and frozen slippery field, the West Champs found redemption in front of 55,819 fans.

Quarterback Bo Levi Mitchell – who won his second league MOP award Thursday night – was named the game’s MVP, going 24-for-36 for two touchdowns and 253 yards to led his team to victory.

Don Jackson and Lemar Durant – who was named Top Canadian – caught TD passes for the Red & White and Rene Parades kicked two field-goals to round the scoring for Calgary.

The turning point of the game was a 97-yard punt return by Terry Williams with just one second left in the first half to give the Stamps a sizeable lead they wouldn’t relinquish. It was the longest return in the history of the CFL championship game.

Calgary won the coin flip and opted to have Ottawa receive to start the game.

After a quick two-and-out on the Redblacks first possession, Mitchell marched the Stamps down the field, thanks in part to a 38-yard catch-and-run by Chris Matthews.

With a second-and-seven at the 22-yard-line, Mitchell went looking for Bakari Grant in the endzone but it was picked off by Jonathan Rose, who despite slipping managed to gain his balance and run it out 26 yards but it was brought back to the five-yard line on a roughing penalty after the pick.

The Stamps got on the board first late in the first quarter, with a short drive set up by Ciante Evans, who picked off a Trevor Harris pass at the 37-yard line and ran it back five yards to give the offence excellent field position.

Two plays later, Ottawa came hard on a blitz and Mitchell flipped a short pass over the pack to a wide-open Jackson, who ran 21 yards into the endzone untouched.

As the quarter expired, Lewis Ward missed a 47-yard field-goal wide left, with Williams running it out with a head of steam before losing his footing and going down at the 16-yard line as he was trying to turn the corner up-field with room to romp.

On his next kick, Ward hit a 30-yard field-goal at the 12:50 mark of the second quarter to get Ottawa on the board.

The Stamps got their second major of the game on an eight-play drive that started on their own 35-yard line.

Two great catches – a 21-yard strike to Eric Rogers and a 26-yard grab by Julan Lynch -helped lead the Stamps down the field, with Mitchell hitting Durant with a 17-yard pass and the receiver stretching out to break the plane and make it 14-3.

After Mitchell got picked off for the second time in the half with just over five minutes to play, the Redblacks looked in good position to pick up some more points but Jameer Thurman ripped the ball out of the arms of William Powell at the 28-yard line and Folarin Orimolade recovered to end the threat. 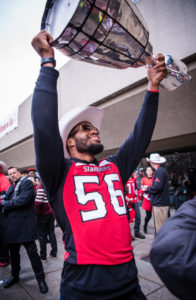 Not long after, though, Julian Feoli Gudino caught a 25-yard pass from Harris and then broke a few tackles as he ran 30 yards for an Ottawa TD.

Harris then hit Jean-Christophe Beaulieu for the two-point convert to close the gap to three points.

Williams kick return rounded out the scoring in the half.

Midway through the third quarter, Ward nailed a 41-yard field-goal to cap off a lengthy nine-play drive by the Redblacks, that featured 28 yards on five runs from Powell.

The Stamps responded with a seven-play drive of their own, capped off by a Rene Parades 34-yard boot to restore their 10-point cushion.

Less than two minutes into the fourth quarter, Rob Maver’s 45-yard punt was fielded by Diontae Spencer, who ran across the field trying to swing wide and was tackled by Riley Jones, forcing a fumble that was recovered by Wynton McManis.

That led to another Parades field-goal, this time from 29 yards out.

Brad Sinopoli looked to have a TD for Ottawa on a wild catch but Stamps head coach Dave Dickenson challenged it and, upon review, the ball was ruled to have hit the ground as he caught it.

Two plays later, the Redblacks went for it on third and two and Jamar Wall arrived to Sinopli just as he was about to catch the ball, popping it loss for an incomplete pass and forcing a turnover on downs.

Rob Maver conceded a safety to give the Redblacks two, with 30 seconds remaining to end the game.