O’leary: Brescacin Aims To Make Most Of New Found Opportunity

O’leary: Brescacin Aims To Make Most Of New Found Opportunity

Juwan Brescacin went to Culver, Indiana, with the same sports dreams that the majority of athletes have in the Hoosier State. He wanted to play basketball.

“Basketball is my first love,” Brescacin, the young Calgary Stampeders receiver said. The Mississauga native was enjoying his bye week in Toronto, running a mid-week media gauntlet. Over lunch near the CFL office, he briefly revisited his basketball days.

“I’d say I was pretty good. I think I was good. I played with a lot of guys that are playing now. I think at one point I was one of the best in the country, maybe.”

You can hear the caution he’s exercising as he says it, but it’s a valid statement. Before he was duplicating OBJ-like receptions on the field in the CFL, Brescacin was applying that athleticism on the hardwood. And he was doing quite well.

The players he rubbed, or maybe traded elbows with is a high profile one. He played on Toronto-based club team CIA Bounce with Portland Trailblazer Nik Stauskas and Tyler Ennis (now in Turkey after a four-year NBA career). Other teammates included former first-overall pick Anthony Bennett, the Bhullar brothers, Sim and Tanveer, both of whom are over seven-feet tall. Brescacin’s best friend, Naz Mitrou-Long, signed a two-way contract with the Utah Jazz over the summer. 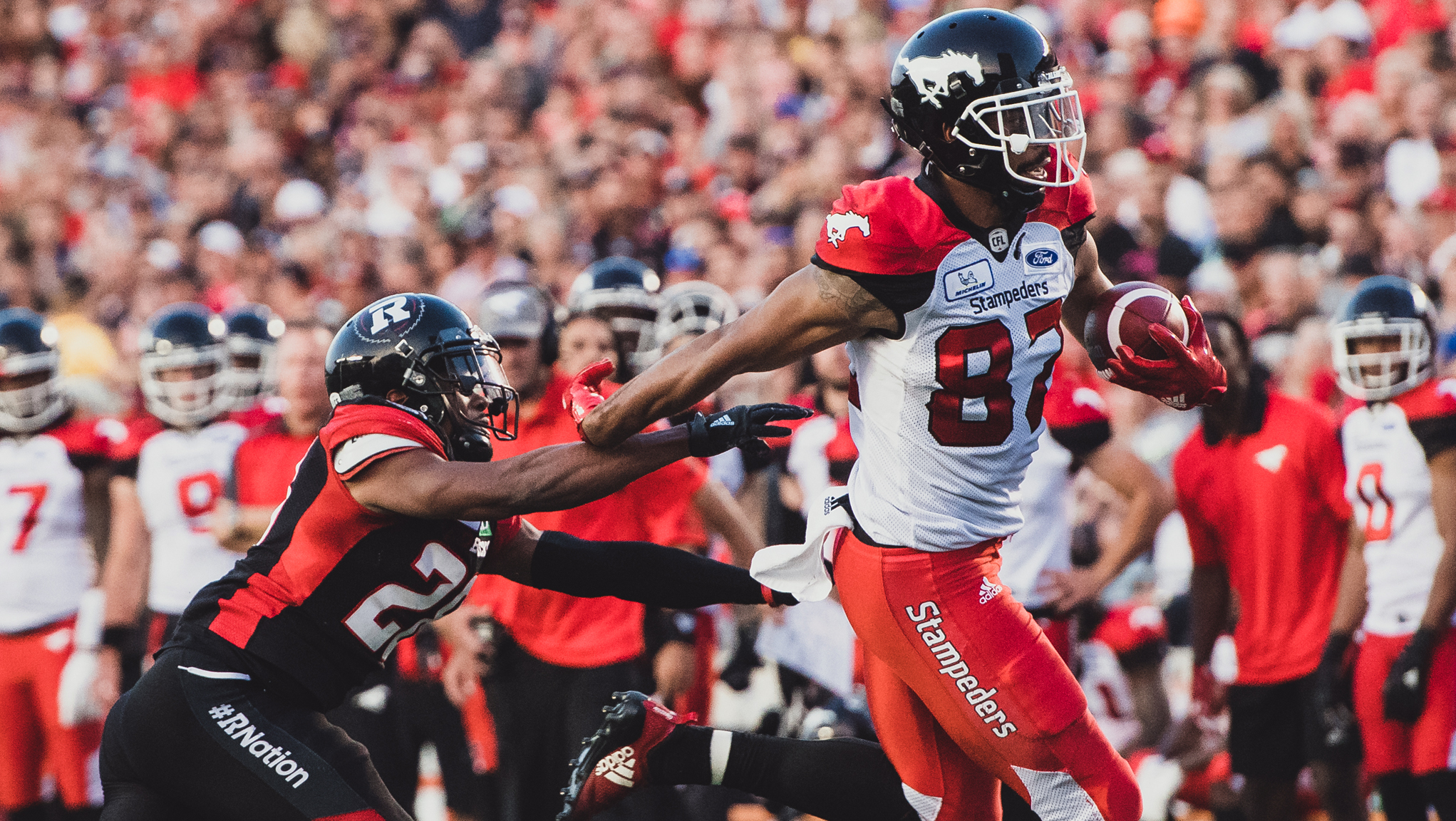 JUWAN BRESCACIN PULLS AWAY FROM A WOULD-BE TACKLER ON HIS WAY TO THE END ZONE EARLIER THIS SEASON IN A DOMINANT CALGARY WIN OVER OTTAWA (JOHANY JUTRAS/CFL.CA)

Brescacin was well into that mix himself. He started out playing football, but around the sixth grade put his focus into basketball and that paid off quickly.

“I could score a bit,” he said casually.

He had a 47-point game as a seventh-grader in Mississauga. By the time he got to Loyala Secondary, 30 and 40-point games came easily. Another teammate and good friend, Jermaine Myers, was recruited to go to high school at the Culver Academy in Indiana. While the coach was watching Myers, he saw Brescacin.

“The coach was at the practice watching (Myers) play and he saw me and said, ‘I have this great opportunity for you academically,’” Brescacin said.

The coach spoke of the life-changing potential in the offer. How the alumni of the school helped its graduates out, even when they were done college. On the court, he could offer something that any kid that ever picks up a basketball thinks about: high school basketball in Indiana.

“We went and visited the campus and it was the most beautiful thing I’ve seen,” Brescacin said. “My mom loved it and i just ended up going there.”

That it was a military school probably wasn’t lost on Brescacin when he saw that campus, but he had a tougher adjustment ahead of himself than he could have imagined. He went there for his grade 11 year, but was new in the school’s system, which had a rank like the army.

“So I came in as a junior and I’m being bossed around by these guys younger than me and smaller than me,” Brescacin said.

“Coming from Mississauga, my parents taught me not to take anything from people. I was just like, ‘Why do I have to listen to you?’ I had to buy into it. The first day there, I had to learn how to make the bed military style, how to fold my clothes a certain amount of inches. You have to expect it every day that you can’t have stuff on your floor.

“I was raised well, so I was always respectful but there were certain things that you would question. You also had to deal with different people’s leadership styles. Some people are demanding that you respect them or listen to them because they had a rank, but that’s not how it works with me. You have to earn my respect and kind of lead by example.” 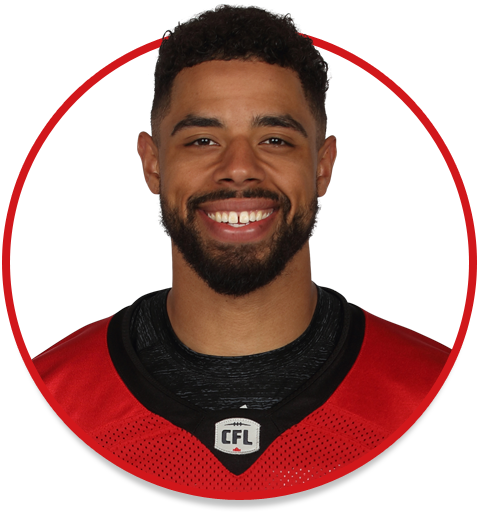 Through the course of his first year at Culver, his coaches encouraged Brescacin to join the football team as well, to get him more scholarship opportunities. After moving all over the field as a kid playing in the Mississauga Football League, Brescacin was set in as a receiver and he fell in love with the game again, earning a letter in both football and basketball each of his two years in Culver.

He took his scholarship with Northern Illinois University, where Jordan Lynch — a Heisman finalist in 2013 and who would later enjoy a two-year run with the Edmonton Eskimos — was his quarterback. Over four years as a journalism major, Brescacin established himself as one of the top receivers on his team. His junior year was his best, starting 12 of 13 games and finishing second in receiving on his team, with 445 yards and tied for a team-leading six TDs. He finished his career with 99 catches for 1,465 yards and 13 touchdowns.

After watching his former college teammate and close friend Courtney Stephen go to the Tiger-Cats in 2013, Brescacin was paying more attention to the CFL, but six years into his stay in the States, he was thinking about NFL opportunities when he graduated. He didn’t take part in the 2016 CFL Draft Combine and held a pro day at Northern Illinois. Only one CFL team showed up for it: the Stampeders.

He watched the draft that year and was scrambling to keep up with it after TSN’s airing of the first round had wrapped up. While he and his family were waiting for the livestream to start on their laptops, Brescacin’s phone started to buzz with texts from friends and teammates. The Stamps called him a few minutes later to tell him they’d taken him 15th overall.

He grew up and kind of built a hate-by-proxy for the Stampeders. He’d watched great Calgary teams come through the GTA for years and take out the Argos and Ticats. Now Dave Dickenson, the conductor to so many disastrous moments for Brescacin the young fan, would be his head coach.

“I remember watching coach Dicky play for them and I was like, ‘Man, these guys are good and they’re always winning they’re beating Toronto. I hate these guys,’” he said. “Now I’m playing for them and I understand why there’ such a great organization.”

Like so many other people around the CFL, Brescacin compares the Stamps to the New England Patriots, or the San Antonio Spurs in the NBA. There’s a longstanding system in place, with scouts that go and find guys to keep their teams stocked with talent. He thinks back to his pro day and seeing the Stamps there.

“That’s a testament to the lengths they’ll go to see if someone’s worth drafting or not. They ended up drafting me and (Alex) Singleton so I feel like that was a pretty good draft year,” he said.

Unlike Singleton, Brescacin’s impact wasn’t felt immediately. Like many other players on that Calgary roster, he had to play the waiting game.

“As a receiver, sometimes I’ve gone games where I didn’t have a ball thrown my way,” he said. It kind of just keeps you hungry and humble and working hard. So when you do get that opportunity you make the most of it.”

Year by year, game by game, it’s getting there for Brescacin. He played in seven games as a rookie in 2016, but played more on special teams. He got into 15 games in 2017 and had 260 yards and figured he played 45-plus snaps in their crushing Grey Cup loss to Toronto. With injuries ravaging the receiving corps, an already increased role this season is continuing to develop. With DaVaris Daniels breaking his collarbone on the field this past week in Hamilton, Brescacin stepped up and had a career game, pulling in five passes for 109 yards.

“I thought our Canadian guys balled out,” Dickenson said after his team won its 10th game of the season. With questions of bringing in a veteran free agent swirling after the game, Dickenson was more focused on what he already had.

“I thought Bres had a great game. Sometimes you get all into this American-Canadian, the American should be better. Let’s just play the best guy,” he said.

“I’ve got to give credit to Bres, having a great game. He was sore and he was blocking his butt off making those great catches.”

After pulling away from the Ticats in the second half, Mitchell marvelled at the job his targets have done this season. With Eric Rogers out for a large chunk of the season (the Stamps are confident he’ll be back on the field this year), Kamar Jorden out for the year and now Daniels presumably joining him, those scouts and that system are being put to the test and passing.

“It’s just amazing to watch these guys continue to plug and play all year,” Mitchell said. “We spoke about it in the beginning of the year. When we talked about having the best receiving crew it wasn’t just our top-five. It’s the fact that we had starters, starters starters sitting on the bench waiting in the wings.”

Brescacin said Mitchell has been a big part of his success this year, too.

“In the offseason I went out (to Calgary) to throw with him before camp and he let me stay with him and his wife, Maddy, they treated me like family. I didn’t have to worry about anything,” he said.

“Having a guy like that off the field be a genuine, nice person, welcoming you into their house and taking care of you for a week (when) he has a baby girl…I feel like it showed a lot about his character. He’s just a genuinely nice guy and a great leader, a great friend.” 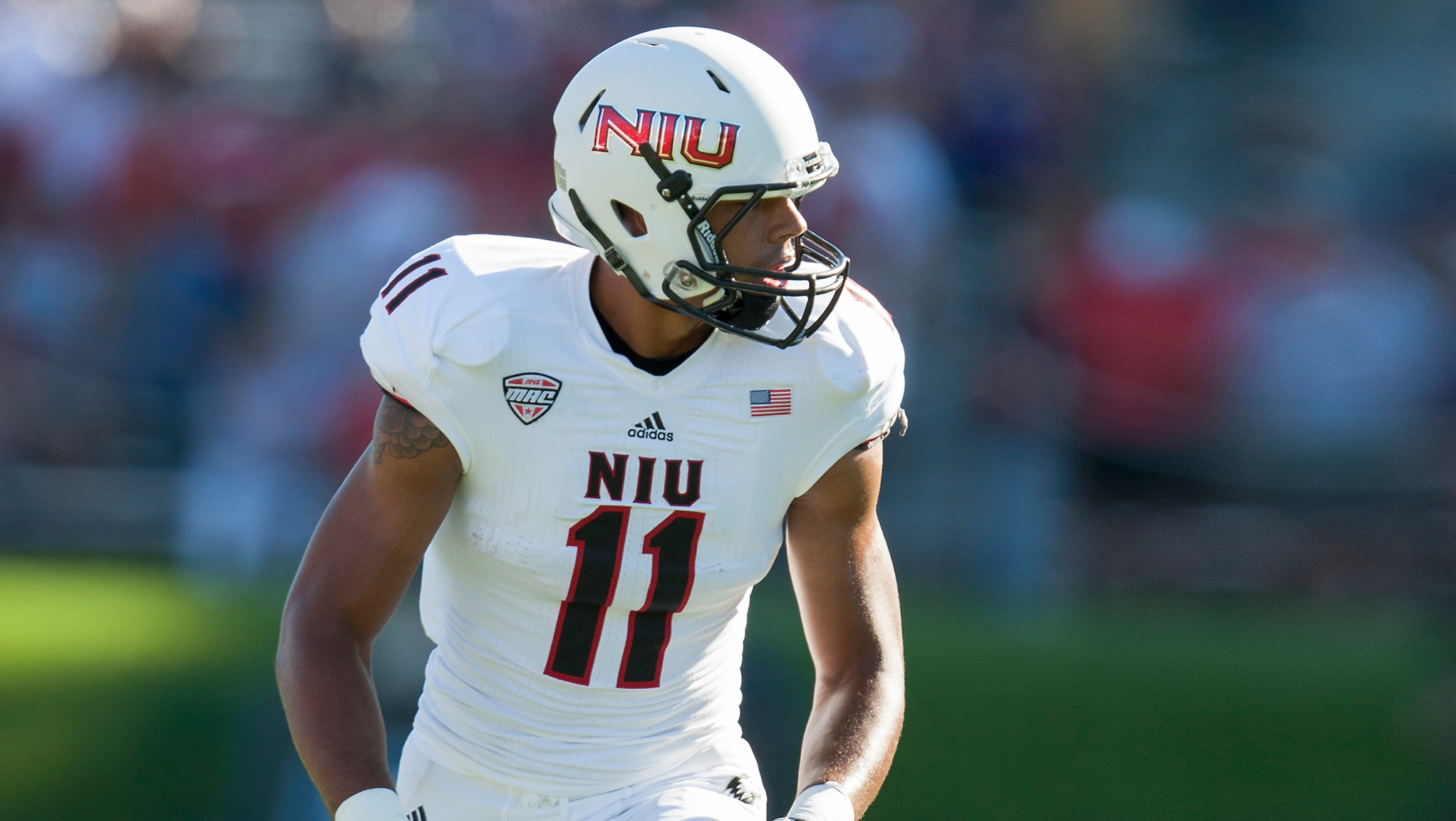 BACK IN HIS COLLEGE DAYS, BRESCACIN LINED UP IN THE ORANGE BOWL ACROSS THE FIELD FROM CURRENT ARGOS RB JAMES WILDER JR. (SCOTT WALSTROM NIU ATHLETICS)

Bright lights and high-pressure games roll off of his back at this point. He played for a state championship in Indiana against now Charlotte Hornet Cody Zeller. At NIU, he played at Ohio Stadium in front of 104,000 people.

In 2013 he played in the Orange Bowl against James Wilder Jr. and Florida State in front of 72,000 fans. Right now, his focus is on more games like the one he had last week and hopefully, getting the job done in November in Edmonton in front of a crowd of 50,000-plus.

“There’s still that one step that we‘ve got to take to finish, closing the book on the chapter,” he said.