Edmonton Eskimos' JC Sherritt (47) celebrates his fumble recovery against the Winnipeg Blue Bombers during the first half of CFL action in Winnipeg on June 14, 2018. Linebacker J.C. Sherritt retired Wednesday after spending his entire eight-year CFL career with the Edmonton Eskimos. Sherritt, 30, was the CFL's top defensive player in 2012 and helped Edmonton capture the Grey Cup in 2015. The California native appeared in 109 career games, registering 552 tackles, 15 sacks, 17 forced fumbles, 14 interceptions, six fumble recoveries and one TD. THE CANADIAN PRESS/John Woods

J.C. Sherritt gets it. An Edmonton Eskimos linebacker — one of the organization’s best to ever suit up — for eight years up until he retired on Jan. 15, he holds a special place in fans’ hearts.

Retired now for going on two weeks, he was named the Calgary Stampeders’ linebackers coach on Monday. That’s rubbed some of those who value green and gold over any other colours in the CFL the wrong way.

“I understand. I have Twitter, I see that some fans are pretty upset and that’s what being a fan is about,” he said. “For me it’s starting a career that I’ve wanted to start for the last 25 years. This is a prime opportunity and right now, (my approach is), ‘What can I do to help Calgary?’”

It’s not weird for Sherritt, but it will feel weird for just about everyone else that’s gotten to know him over the last eight years. It will take time for Edmonton fans to get used to hearing Sherritt worry about Calgary’s wellbeing. Wait until you see those first pictures of him on the field at McMahon this spring in training camp, wearing Stamps’ colours as he runs the linebackers through drills.

Change in sports hits us harder than it should, really, and it seems to hit harder and matter more in Alberta, where Edmonton-Calgary can very easily feel like the inspiration for the Springfield-Shelbyville rivalry. 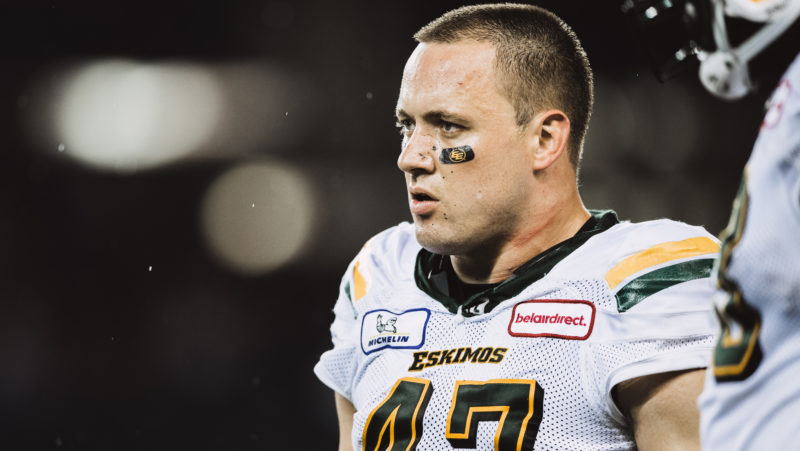 AFTER EIGHT SEASONS AND MORE THAN 500 TACKLES WITH EDMONTON, JC SHERRITT IS JOINING HIS BIGGEST RIVAL (JOHANY JUTRAS/CFL.CA)

Players and coaches might get sucked into that on game days, but beyond that, business sense prevails. Sherritt had been looking at NCAA and CFL coaching opportunities this winter and when he retired, the Stamps quickly reached out to him.

“After my official retirement on the 15th I got a call from Huf (John Hufnagel) and Dave (Dickenson) saying they’d like to interview me, which was obviously something I was extremely interested in,” Sherritt said.

“I flew up, the interview went great and they offered me the linebackers job. It was a no-brainer for me, for that opportunity.”

In Calgary, Sherritt gets to start a coaching career with an organization that has shown itself to be the benchmark of success in the league for the last decade. Sherritt saw that firsthand as a player. He spent his eight years in the CFL thinking of it in part as an internship for his own coaching career. He’s watched Dickenson take the coaching reigns from Hufnagel, watched Rick Campbell go on from Calgary to a successful head coaching gig in Ottawa, watched DeVone Claybrooks leave the roost this past season to take his first head-coaching role in BC.

“At least through the last decade, through my time in the CFL they’ve been the most successful franchise. I think there’s a reason behind it,” he said. “So to even come in and meet those guys and go through the interview process was a huge learning experience. It was the same as when I got offered a scholarship in high school. It’s just a great, great feeling and you feel fortunate.”

This will be Sherritt’s first professional coaching opportunity but he feels ready. He’s spent off-seasons helping out at his alma mater, Eastern Washington University. He and former CFLer, Greg Peach, run the Pro Vision Academy in Spokane, Wash., where Sherritt worked extensively with linebackers.

He’ll dig into this new job with the same tenacity that he used as a player. Undersized and underestimated at each of his football stops throughout his career, he proved he belonged. Working at the job won’t be a problem for Sherritt.

“You look at the staff I’m on, I think three of the coaches have been in that organization for over a decade. There’s going to be a lot of experience that I’m going to have there to lean on.”

He lists off monumental figures over his time in the CFL, coaches that he’s learned from and taken notes on. Rich Stubler, Chris Jones, Jason Maas. He was with the Esks through good times and bad, from the end of the Ricky Ray era into a new stretch of prominence with Mike Reilly at QB. He learned from it all.

“I know how much coaches adapt. I think all of the great coaches do adapt. They learn from the people around them, good or bad and you just constantly have to try to improve and be the best coach you can possibly be,” he said.

“That comes from really just learning and staying humble and knowing that there are guys out there that have done it longer than you, better than you and you need to learn from everyone.”