‘THERE’S GONNA BE NO SENTIMENTAL VIBES’

‘THERE’S GONNA BE NO SENTIMENTAL VIBES’

No need for hankies to dab at leaky tear-ducts.

This weekend, of all weekends, is no time to indulge in nostalgia.

“Who?” teases safety Courtney Stephen. “Never heard of ’em. Honestly, man, I don’t remember anybody’s name from down there anymore.

“You know what? I’ve got blinders on. The names on the backs of the jerseys don’t matter. We’re going in there for the win. Period.

“There’s gonna be no sentimental vibes. No laughing and joking. This is pro football. And at the end of the day, you want to – you’re paid to – go out and get your job done.

“Ain’t gonna be any smiles or handshakes or any of that stuff until we get that W.”

The Brampton-born Stephen, signed by the Stampeders as a free agent on Valentine’s Day, marks his 100th regular-season CFL game in the town, Hamilton, if not the venue, that started it all for him back in 2013, as the eighth pick in the preceding draft out of Northern Illinois University.

Ninety-six of that soon-to-be century aggregate came modelling the famous Tiger-Cats’ black and gold, only a 45-minute drive from his hometown.

“My first game was actually in Guelph, because they were building the stadium (Tim Hortons Field),” he recalls. “We played against Winnipeg. 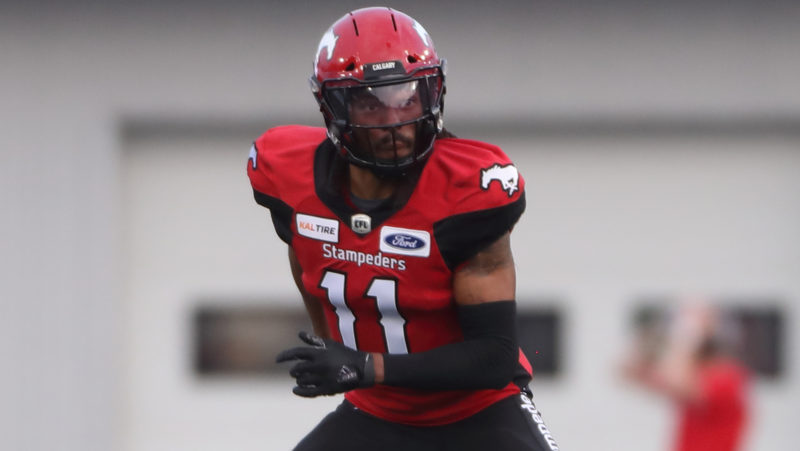 Just as former Stamps Ja’Gared Davis and Tunde Adeleke will be, in a sense, confronting their professional past on Saturday, after half a dozen seasons as a Tabbie this will be Stephen’s first rival look at Speedy B and Jeremiah Masoli and Simoni Lawrence and Delvin Breaux and Ted Laurent and on and on.

In preparation for Saturday’s collision, though, he vows to have wiped his mind clean of those 221 defensive tackles and 12 interceptions he contributed to the Ti-Cat cause, highlighted by a 2014 Grey Cup game bid against his current employers.

“Football,” reasons Stephen, “is a career where every day you’re so focused on the task at hand, on the here and now, that you don’t really take any time to stop and reminisce, to look back.

“That’s for after you’re done.

“I admit, it’ll be cool to play again with my family and friends from back home in the stands. And yes, it is a milestone, 100 games, but as I keep repeating the win is the most important thing.

“The team’s rolling now, we’re on a mission. This is the next stop. We just want to keep the train moving.

“It’s a good opponent to see what we’re made of, too. To measure ourselves.

“I think we’ve got a great team. We’ve got a quarterback right now who is absolutely balling. Our defence is really starting to gel.

“The fans are passionate there so as a visitor you can definitely embrace the environment. And I love an away game as much, even maybe more, than a home game. Away, you’re the enemy. Hostility everywhere. The adversity you face in those types of atmospheres can help a team come together, because each other is all you’ve got.

“In a way, that’s why we play defence. It’s fun to score points, sure, but it’s more fun to be the ones to be spoiling the party, to be putting the candles out at the end of the day.”
So come Friday morning, it’s off to Steeltown for Stephen and his new gang of compadres.

“Yeah, it’s the place I used play,’’ repeats Stephen, with an exaggerated shrug. “But I play here now.

“I just want to play football. I just want to hit people. And I want to make sure my 100th game is memorable for all the right reasons.”

Mayala: ‘I want to be known as one of the best receivers in the league’

GOING WITH THE FLO