Being of good Kingston, Ont., stock, Cory Greenwood is familiar with a Gordie Howe Hat-Trick.

“A goal,” he began, rattling off the three components  in a single game that Mr. Hockey made famous. “An assist. Aaaaaaand …”

He glanced downward at his pint-sized inquisitor, searching for a little help.

Thursday, Greenwood pulled off what shall from here on in be christened a Wayne Harris Hat-Trick, in honour of The Thumper, the greatest linebacker, arguably the greatest player, ever to don the red and white: A pick. A fumble recovery. And a forced fumble.

“I’ll bet he had a lot of those kinda nights, huh?” mused Greenwood admiringly.

On a wet, cold, blink-and-the-weather-changes evening with the Stampeder offence – outside of two-TD slotback Juwan Brescacin – seemingly struggling to escape a bog, the Greenwood-propelled D paved the way for a 26-16 victory over the winless Toronto Argos at McMahon Stadium.

The defence shone, racking up four interceptions (by Greenwood, returned-to-the-lineup Brandon Smith, Robertson Daniel and Raheem Wilson), two fumble recoveries and a third-and-one turnover on downs for a seven-turnover outing.

Greenwood was the man in the middle of it all.

“I filled up the stat board,’’ he mused. “Kinda wanted a sack, too.

“That team over there, they haven’t won a game yet but they had us on our heels.

“Honestly, plays were just coming my way. When that happens, as a linebacker you just want to make ’em, get off the field and watch our offence work.” 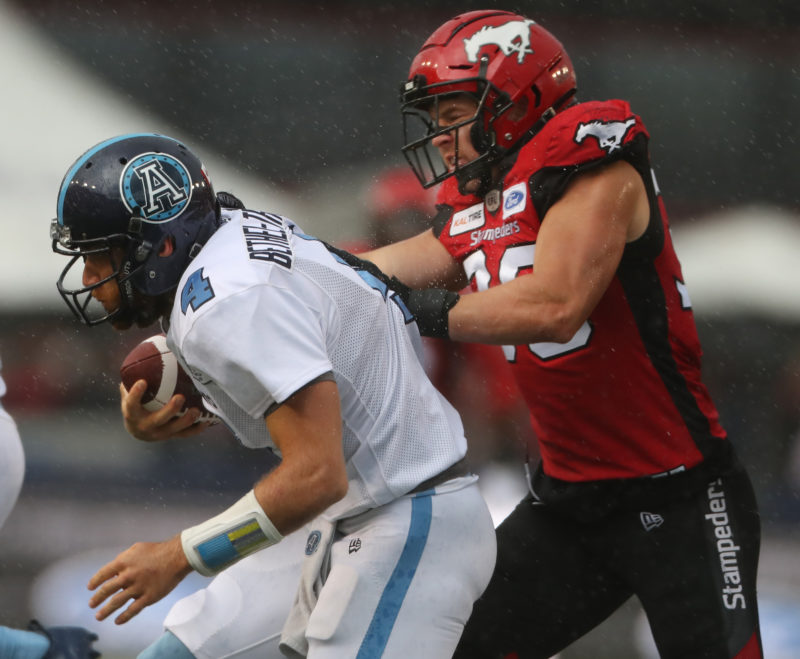 Greenwood meant a lot, so much, to the Stampeders on Thursday, his hit at his own 17-yard-line jarring the ball loose from Argo wideout Armanti Edwards for that ever-opportunistic Tre Roberson to scoop up and sashay 93 yards for the DB’s second touchdown of the early season.

No. 36’s interception arrived at a critical time, too, late in the third quarter with the Argos in prime position at the Calgary 29-yard line following a pick of their own and looking to close to within a converted touchdown.

“I’ll give (first-year linebackers’ coach) J.C. Sherritt a lot of credit there. They knew each other from Edmonton, have a great relationship and J.C., if you watched his instincts as a linebacker, was as good as anybody. He’s been able to get that into Cory’s brain. He’s a hitter, he can run. Now he’s seeing the field, doing the right things. Had a great game for us.

“It was in doubt. Certainly a lot of plays made by our defence. Ball-hawks doing a great job.

“Lucky our defence played so well. The first two games I think everyone was definitely jumping off the bandwagon on our defence. Our coaches have been continuing to work hard and find things that our players are good at. We’ve also got some young guys who are stepping up and making plays.

“We needed it. We really did. Five-day week. Knowing they’d be desperate. We really need to win at home. Had to get that win and we did.”

This was most decidedly a bend-don’t-break performance from D co-ordinator Brent Monson’s group. The Argos, trying desperately to gain some sort of traction on a season quickly unravelling, rolled up 410 yards in net offence, contrasted with Calgary’s 244.

But when Greenwood and Co. needed to make a stop, or produce a takeaway, they delivered.

“I think every week we’re getting better on the details and stuff,” said Greenwood. “We’re growing. Even our depth is being tested. Smitty missed a little bit of time and (Jamar) Wall, with a little bit of friendly fire he went out. That’s a tribute to our coaching. 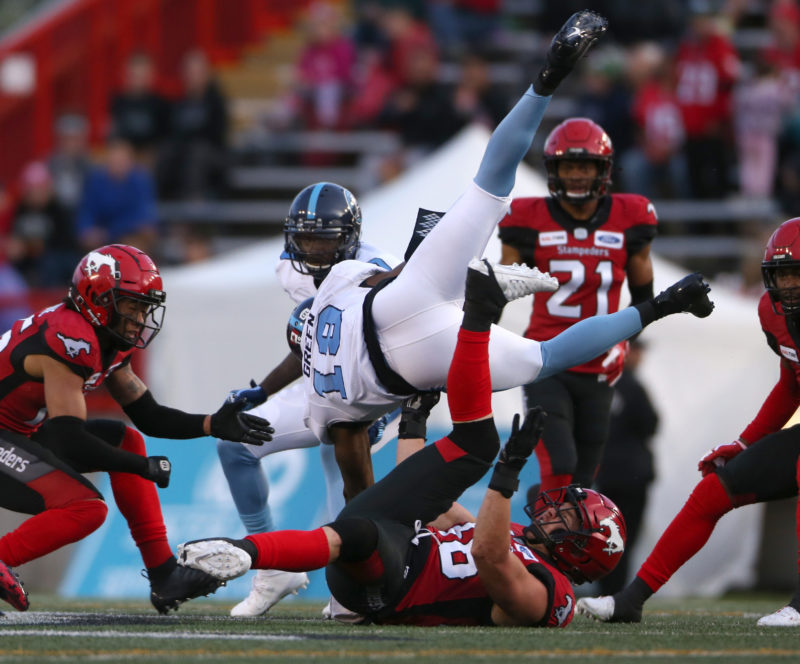 Greenwood (below) getting a piece of Toronto receiver SJ Green. (Photo by David Moll)

Roberson was pleased as punch to see his secondary buddies get in on the ball-theft party.

“It’s awesome,’’ said the five-pick cornerback. “Awesome. You can’t just say you want to keep the ball away from me. Everybody in our secondary can play defence. Everyone has interceptions, pretty much, right?

“Smitty’s a helluva player. I love playing next to him. He’s taught me so much. A future Hall-of-Famer. I love him. Love him to death.

“I feel we’re clicking pretty good. Everyone’s pretty disciplined in what they got going on. Brent Monson’s calling a great game, putting us in great positions to make plays happen. All the coaches.

No one made more plays versus the Argos than the one-time Argo.

“I can’t remember the last time I had a game like that,” confessed Greenwood. “College, maybe.

“Not in the pros. Nope. Uh uh. That was my first career pick, too. In the NFL, I was down there for five years and only covered kicks. Up here, I got hurt and only started something like 22 games so I haven’t had that many opportunities.

“So to get that first one means a lot to me.”

And the prospect of more Wayne Harris Hat-Tricks as the road continues to wind through to late October.

“Man,”  he laughed, “I’ll take one of those anytime. Every week if possible.”