Arbuckle: ‘we All Made Plays When We Needed To’

Arbuckle: ‘we All Made Plays When We Needed To’

OTTAWA — The Calgary Stampeders left it to the last seconds of the game to finally clinch a victory, but as the saying goes, “Better late than never.”

Calgary got its fourth victory of the campaign off the strength of five field goals by kicker Rene Paredes, with the final one walking off the Ottawa REDBLACKS for a 17-16 victory at TD Place on Thursday night.

The game was locked in a field position battle, with only field goals to speak of on the scoreboard following the first half. Paredes and Lewis Ward went kick for kick and saw their respective teams into the locker rooms deadlocked at 9-9. 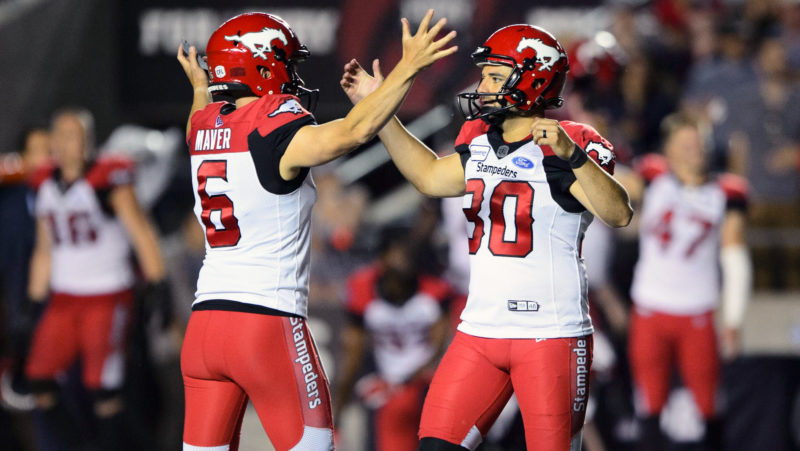 Both defences combined for nine turnovers in the game, with six of those coming in the opening 30 minutes. Ottawa starter Jonathon Jennings threw two interceptions, one to Robertson Davis in the first quarter and another to DeShaun Amos in the second. REDBLACKS running back John Crockett also had a fumble in the second quarter. Calgary had a pair of fumbles in the first half, as well as a turnover on downs after they were stuffed on a quarterback sneak.

Arbuckle had a bounce-back performance, completing 30 of 37 passes for 370 yards on the night. He had no issue finding open targets, as Markeith Ambles, Reggie Begelton, and Eric Rogers all finished with over 70 yards receiving.

“I’m just glad we came out with a win. It shows that we can complete a game and come together, especially during adversity. It just means a lot for us to see that,” Begelton said.

The Stampeders looked to have a good shot at taking the lead with around two minutes to go in the game. Arbuckle floated a ball to Ambles on the right sideline for a gain of 28. That set the table for a 24-yard gain by Richie Sindani, but as the receiver was attempting to stretch for the goal line, he had the ball knocked loose by defensive back Corey Tindal. It would be recovered by Sherrod Baltimore and would give the REDBLACKS’ offence a chance to run down the clock.

They would quickly be forced to punt, leaving Ottawa head coach Rick Campbell with a decision: punt and give Arbuckle and the Calgary offence good field position or concede the safety and give the Stamps the chance to win with a field goal. Campbell decided on the latter and had Richie Leone run out of the back of the end zone.

Arbuckle and the Calgary offence would promptly march down the field and set up their kicker with a chip shot to win the game, and he would make no mistake

“When you make a decision and it doesn’t work out, you’re going to have to take it as a head coach – I’ve done it many times,” Stampeders head coach Dave Dickenson said. “You go with your gut and what you believe and ultimately, it didn’t work out for him.”

The win could prove to be a massive one for a Stampeders team that has two massive inter-divisional matchups over the next two weeks. They head back home for a game against the Edmonton Eskimos on Aug 3 before going to IG Field for a showdown with the Winnipeg Blue Bombers in Week 9.

“It’s just good to try and create a little momentum,” Dickenson said. “Anytime you can bank one and get two (points) on the road, it’s a big win for your team.