Romar Morris is fast on the football field. Really fast.

There is one place where the former track star might be even faster and I’m not talking about the sprint events he once dominated while in high school.

I’m talking about an area where he has stunned the Calgary Stampeders and most every football observer who has ever witnessed someone suffer the painful setback of rupturing an Achilles tendon and that is in recovery time.

Eight and a half months is all it has taken the native of Salisbury, North Carolina to get back into a game.

Eight and a half months for an injury that usually keeps a player out for a calendar year, sometimes a little more.

Some never make it back, the lingering damage slowing them up, taking away the explosiveness that they need in order to compete in pro football.

But Morris, the running back and kick returner that burst onto the CFL scene like a racehorse from the gate in 2018, has defied the odds a little, looking ahead to the second game of his 2019 season when the Stampeders play the Blue Bombers in a first-place showdown in Winnipeg on Thursday night.

His first game back – last Saturday’s – came less than nine months after he took a step back on a punt return during the 2018 Western Final, and felt “like a baseball bat hit me in the calf muscle.”

The 26-year-old’s rushing numbers from last Saturday’s game weren’t much, a far cry from the yardage he’d begun to pile up as a Stampeder last season, but never mind that. The yards will come, and they’ll come from a guy the Stamps figured would miss the entirety of this season before adjusting those expectations to, perhaps, Labour Day.

Morris, then, is back in the game, way ahead of schedule.

“I don’t know what the science behind it is, but I’m a quick healer,” says Morris, crediting good DNA with at least part of his speedy recovery. “Whenever I get a cut, my skin heals so quickly,” he added with a little incredulity in his voice.

After surviving the rigours of game action against the Eskimos in Week 8, when he rushed nine times for 14 yards and caught five passes for 49 more, Morris is feeling confident that he can quickly regain the form that made him such a threat during the Stampeders’ drive to the Grey Cup, before he was cut down by that baseball bat on November 18th.

“It helped me out immensely, just to get that feeling,” he says of the game action. Any queasiness about testing that right foot of his and the tendons that keep it and the ankle functioning just kind of disappeared. It felt normal after that,” he says.

“It was a mental test that I had to overcome for myself. So I don’t have to be afraid that it’s gonna happen again so I can just play comfortable.”

Morris played ten comfortable regular-season games for the Stampeders in 2018, rushing 78 times for 376 yards and catching 24 passes for 167 more, while wowing with his return abilities too. With 813 punt and kick-off return yards, the man who was an all-state 60-, 100- and 200-metre track star while attending Salisbury High, had given the Stampeders yet another velocity demon in the backfield and on specials, to go along with Terry Williams and Don Jackson. 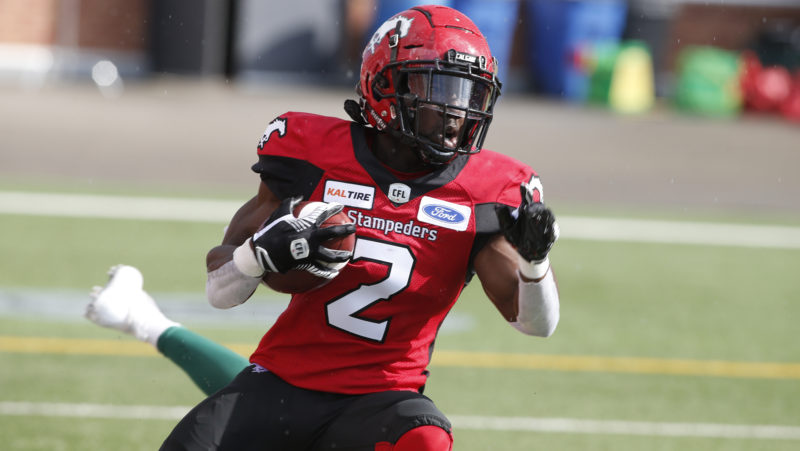 Then came the Western Final and the fateful punt return. As Morris prepared to drive forward to get under a short kick, he first took one step back to plant hard so he could launch forward. The pain came immediately.

“I just fell and lay there. I pretty much knew, when it happened, what it was,” he says.

While he’d never before suffered an Achilles injury, Morris remembered a teammate who had and figured he was in for a long road to recovery.

Maybe, though, with his propensity to heal quickly, he could make his way back much sooner than everybody thought.

“They told me anywhere from ten to twelve months,” says Morris, who did more than just put his faith in good genes, although that was part of it.

“It was just doin’ all of the right things as far as taking care of my body. Eating right, going to rehab every single day and getting a lot of rest.”

He also allowed his physiology to do its thing. “I got tons and tons of rest,” he says. “I was able to just let my body heal.”

If Morris was pleased with how swiftly his recovery was going, the Stampeders, as you’d reasonably expect, weren’t listening all that closely when he showed up to training camp pronouncing himself on the cusp of being ready to take part in drills. Six months? You’ve gotta be joking. 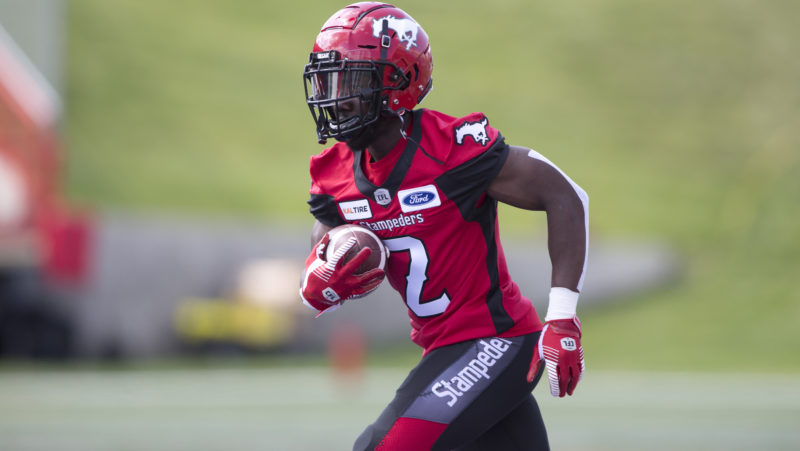 That kind of progress surprised the Stampeders’ brain trust. Perhaps they weren’t able to fully trust their eyes, considering the accepted norms when it comes to an Achilles injury timeline. They told Morris to, um, cool his heel, I guess, as they wanted to ensure that he had as much time to get back to one hundred percent.

It was thought that the Battle of Alberta on Labour Day Monday, or the follow-up game in Edmonton the weekend after might be a good ballpark target date to hit. Instead, Morris, who’d gotten up to full speed in sprints during the month of July, bested even that optimistic outlook by a month.

Against the Eskimos last Saturday, Morris eased back into things, as much as a guy can ease back into things when angry men in the other team’s colours are bearing down hard. Head Coach Dave Dickenson was impressed and optimistic about Morris’ trajectory.

“To get through a game without taking, really, one snap – anything with pads on – for eight and a half months, I feel like Romar’s one of the guys that’s happiest,” Dickenson said after the game. “He’ll get better and better but, c’ mon, he hasn’t practiced or played in so long. We did feel like he did a good job.”

The Stampeders have an abundance of backfield and return talent.

Williams, the man who busted open last year’s Grey Cup game with a 97-yard punt return touchdown against Ottawa, hauled back a 103-yard kick-off return for a touchdown against Edmonton last week. Jackson, the second-year man who led the team with 924 rushing yards in 2018, returned to practice this week after missing the last five weeks due to a concussion. Then there’s Ka’Deem Carey, signed last fall by the Stampeders, impressing with his first tastes of CFL action this season before being nicked up in a Week 7 win over Ottawa, relegated to the injured list for last week’s tilt with Edmonton.

When everyone’s healthy, Dickenson will have one of those “good” problems coaches talk about; a bounty of talent that needs to be managed to its fullest, to its most productive.

Now that he’s put his first game behind him, put any lingering doubts about his Achilles on the shelf, Morris is hoping to fully take part in the havoc that Calgary’s running backs and returners are apt to deploy against the opposition.

“I feel pretty fast,” he says. “Just waiting for the proper time so I can open it up and show everybody that my speed’s still there.”

Don’t sleep on Morris’ speed, even in these early stages of returning from an Achilles rupture.

He does, after all, tend to show up ahead of time.