And in a big way.

Returning to the field after missing seven games due to injury, the Stampeders MOP pivot went 19-of-28 for 263 yards and a touchdown to lead the homeside to a 25-9 victory over the Edmonton Eskimos in front of 32,350 fans at the annual Labour Day Classic at McMahon Stadium.

It was the eighth straight LBC win for the Stamps over their provincial rivals.

Calgary improved to 6-4, while Edmonton dropped to 6-5. The rematch between the two clubs goes Saturday at Commonwealth Stadium.

One of the happiest guys to welcome back Mitchell was receiver Reggie Begelton, who had a monster game with 10 catches for 138 yards, one major and a two-point convert.

The Bo to Begel connection put what was the final nail in the coffin in the contest, hooking up for a 24-yard touchdown strike in the fourth-quarter.

Calgary’s defence deserved major kudos in the contest, holding CFL passing leader Trevor Harris to just 216 yards in the air. Coming into the tilt, the Eskimos quarterback was averaging 348.

Overall, Calgary limited Edmonton to just 271 yards of total offence, while putting up 464.

With 2:45 left in the fourth-quarter and Edmonton sitting at 3rd and 10 in the redzone and looking to get back into the game trailing by the eventual final score, DB DaShaun Amos batted down a ball at the goalline meant for Ricky Collins Jr. to end the threat. 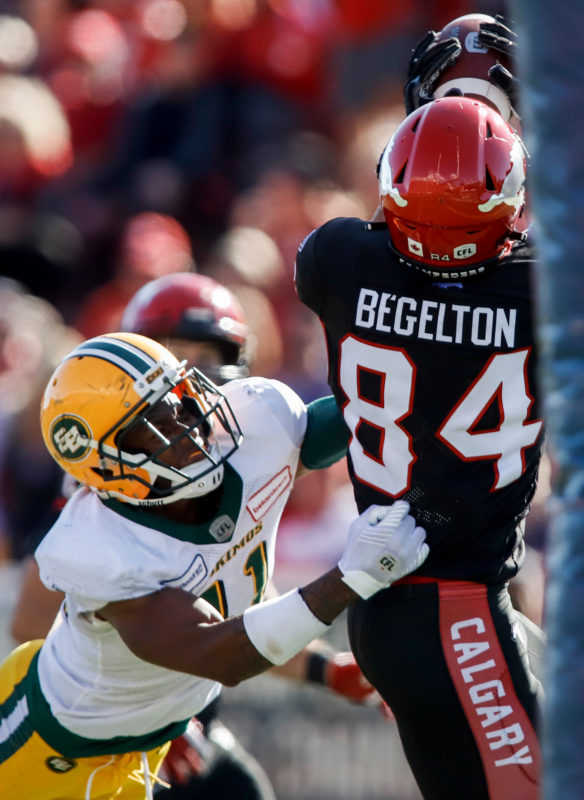 On the ground, Stamps running back Ka’Deem Carey was an absolute beast, like his quarterback showing no rust after returning to game action following three games sidelined.

Carey had 16 carries for 143 yards, running all over the Edmonton defence.

The Stamps first possession of the tilt saw Mitchell hand off to Carey who scampered for a first down.

The ensuing seven-play, 55-yard drive ended up with the Stamps getting scoring first courtesy of a 55-yard Rene Paredes field-goal.

The veteran kicker added another three later in the first quarter, after second-year DB Royce Metchie got his first CFL interception, hauling in a ball that went off the hands of Esks receiver Ricky Collins Jr.

Edmonton kicker Sean Whyte then hit a 44-yard FG to get his team on the board.

After a back-and-forth second quarter that didn’t produce any scoring for much of the way, Paredes had a chance to add another three with just over four minutes to play in the half, but missed a 38-yarder wide right. The Stamps did get a single point on the play.

Whyte followed up with another 44-yarder for the visitors before Nick Arbuckle – who had played QB in Mitchell’s absence – ran in a one-yard touchdown late in the second quarter to pad the homeside’s lead.

Mitchell hit Begelton for the two-point convert after the TD.