Stamps Have Revenge On Their Mind With Als On Deck

Stamps Have Revenge On Their Mind With Als On Deck

Calgary Stampeders quarterback Bo Levi Mitchell (19) yells out orders at the start of a down during the second half of CFL action against the Toronto Argonauts in Toronto, Friday, Sept. 20, 2019. THE CANADIAN PRESS/Cole Burston

CALGARY — The Calgary Stampeders are amping up the intensity down the stretch as they look to win back-to-back Grey Cups, and while the team has to wait a few more weeks until the playoffs arrive, the postseason weather has hit Calgary early.

To open their week of preparation for Saturday’s clash with the Montreal Alouettes, the Stamps arrived at McMahon Stadium for practice in the middle of a storm that was expected to leave 25 centimetres of snow in Calgary.

“In the CFL, when that cold win starts to kick in — and we skipped that and went straight to the snow — you know it’s playoff time,” Stamps quarterback Bo Levi Mitchell told Stampeders.com. “You know it starts to get to that feeling and we’ve got a long way to go though and I think everyone in the West feels like it’s already playoff time. Everybody is really tight in the races and it’s just going to come down to the last couple of games.

“I think we’ve got the schedule we want, playing against those guys to end the season. It works in our favour if we come out and play the way that we should. We control our own destiny basically when it comes to that.”

The Stampeders enter October sitting atop the West Division, a position they’ve become accustomed to — albeit in a tie with the Saskatchewan Roughriders. Since getting Mitchell back from injury, Calgary has snapped off four consecutive victories, bookended by a win over the Toronto Argonauts in Week 15.

“It’s better to control your own destiny than hoping other people beat somebody else — that’s where we were a month ago. But it’s really more about momentum and trying to make sure you’re playing your best football at the end of the month,” head coach Dave Dickenson said. “Whether you finish first, second, or third — I couldn’t see us in fourth, but you could — we’re going to be in the playoffs; we’ve got to be playing good football.”

The Stamps haven’t had the best of luck in Montreal. They hold a record of 15-24 all-time against the Alouettes away from home. Their 12-6 victory there last season served as the first win at Percival Molson Memorial Stadium since 2013.

“It’s a place where we haven’t historically played very well so we got a win there last year for the first time in a long time,” Mitchell said. “…It was one of those ugly games but s— man, you’ll take a win when you can get it.”

This will serve as the final time the Als and Stamps will meet up in the regular season. In the first clash at McMahon, the inter-divisional foes treated everyone to arguably the best game of the entire season. When all was said and done, it was the visitors who walked away with a 40-34 victory.

Montreal will get quarterback Vernon Adams Jr. back in the fold after the 26-year-old served a one-game suspension. Back in Week 10, Adams torched the Calgary defence during the overtime contest, going for 407 yards and a pair of touchdowns while adding another two scores and 38 yards on the ground.

That game saw Nick Arbuckle oppose Adams, and while Calgary will have its star pivot back under centre for the rematch, they’re not coming in fully healthy.

On Monday, Dickenson announced that receiver Markeith Ambles will miss the rest of the season after undergoing surgery on his ankle. On top of Ambles, both Kamar Jorden and Juwan Brescacin are on the six-game injured list while Reggie Begelton and Richie Sindani are on the one-game. The latter pair did return to the practice field but Dickenson is waiting to see how the week goes before deciding whether either individual is ready to return to game action.

The news comes just a week after running back Ka’Deem Carey was lost for the year due to a broken arm. The Stamps’ backfield has been hampered by ailments all season, with both Don Jackson and Romar Morris also seeing stints on the injured list.

But the injuries have given the team the chance to get a look at some of the younger members on the roster. Against the Argos, it was the likes of Josh Huff, Colton Hunchak, and Hergy Mayala that got the chance to shine alongside Eric Rogers.

Since returning, Mitchell said that he believes the offensive line has been the most impressive, allowing just one sack over the current winning streak. However, he believes there’s still work to do in order to be as good as the other units on the team.

“I feel like we’re progressing offensively but I just want us to match the defence’s efforts right now,” he said. “I think the defence is ballin’ and special teams has really taken a step over the last four or five games so I just want to make sure we’re matching that.”

It’ll be Jackson who sees the majority of carries out of the backfield going forward. The 26-year-old finished with 924 yards last season for the Stamps, so he’s no stranger to the feature back role. He’ll be running with his fellow running backs in mind for the rest of the campaign. 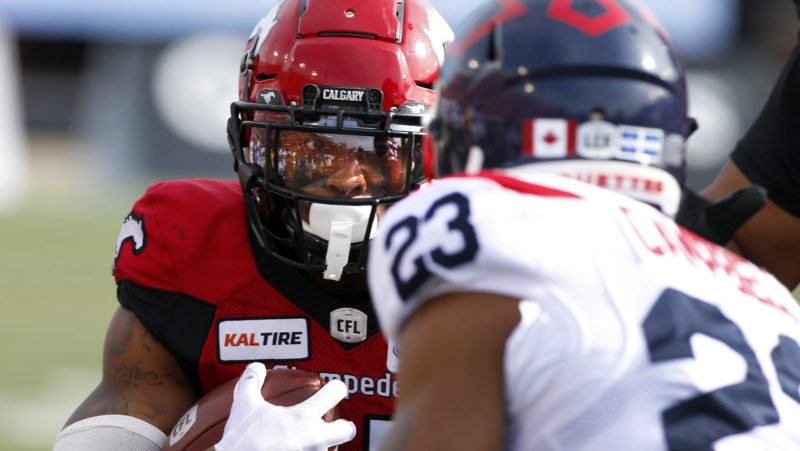 “I’ve just got to play in the name of those guys, Romar and Ka’Deem,” he said. “… It ain’t been the easiest season but we stay above all that and put our friendship, our brotherhood above all that other stuff. All we know is that whoever is on the field, we try to be the best we can be and represent everybody else in the room.

“…We’re a tight-knit group and we refuse to let anything change that.”

When asked about the rematch with the Als, Jackson kept it short and simple, saying “we ain’t squashing no beef.”

All-time records go out the window once the ball is kicked off, and the Stamps are all-business down the stretch. The Alouettes can clinch a home playoff game with a win. That’ll be easier said than done, as Calgary is definitely one of the scariest teams in the league once again despite being shorthanded.

“We’re getting better. We know this is a big mountain to climb and we’ve got to keep taking steps forward,” Dickenson said. “Sometimes, you take a little dip here and there but you’ve got to make sure you get back up and keep rolling and we understand the last five and how important they are. We’re in a good position though; a better position than we were in going into last month.

“I think we’re getting better too. We’re not getting any healthier but I feel like our team understands the formula to win, we’re doing the right things, now it’s just a matter of can we get it done.”