When CFL Free Agency officially opened, the Stampeders were quick to lock up a handful of players.

First up, the team inked U of C product Connor McGough.

And former Stampeders linebacker Alex Singleton, a close friend of his, couldn’t be happier.

“Connor is my guy,” he said. “It’s the best opportunity, I think, for him.

“He’s one of those hungry dogs with a motor.

LETS GOOO!!! Thanks @calstampeders for this amazing opportunity!! Its an amazing feeling to be back where my football career started!! Now lets get to work!!! https://t.co/cSjAgQvqzE

“From what he’s going to do for Kilam on special teams to (defence); you’re going to work on your craft every day and I think that’s what he’s most excited for and I’m excited to see that. With Mace and Monson and those guys on defence, it’s super exciting.”

Playing for two different CFL teams, Singleton and McGough began their friendship in the off-season.

Heading into the 2018 season, they were introduced by another former U of C product while training together.

“After my rookie season, I decided to stay in Calgary and I trained at COP with Bo (Levi Mitchell),” explained Singleton. “Mercer Timmis also trained with us and he knew Connor, so after the next season, he brought Connor in and we got to know him really well.

“It was fun competing with him and watching a young rookie who went to U of C and got drafted to Hamilton, just learning how to be a pro and all of that stuff. Getting to be around him every day and getting to build a friendship off of the field. He’s one of the guys that came to party with us when we won the Grey Cup in 2018, just being a supporter. He’s one of my best friends in Calgary. He’s a great dude and I’m so excited for him to be in Calgary.”

Later that on Feb. 11, after John Hufnagel and his staff had locked up defensive backs Richard Leonard and Branden Dozier and re-signed quarterback Montell Cozart, they put pen to paper with another signal caller – Dakota Prukop.

Prukop played with the Toronto Argonauts from 2017-19, making his only appearance on the field this past season, completing 18-of-30 pass attempts for 284 yards with three touchdowns and pair of interceptions.

Singleton may not have been the deciding factor for Prukop to choose Calgary, but he’s been selling the city to his friend for years.

“The day he signed in Toronto, I was already in Calgary and we talked all the time,” Singleton said. “We talked about the CFL, about trying to get him in Calgary, about how much I loved Calgary, what it would be like to play under Dave and then to play under Bo and to learn from Bo. Just all of those things that Calgary gives; and Huff, between him, Dave and Bo, that’s maybe the three best minds you could have at QB in the whole CFL. 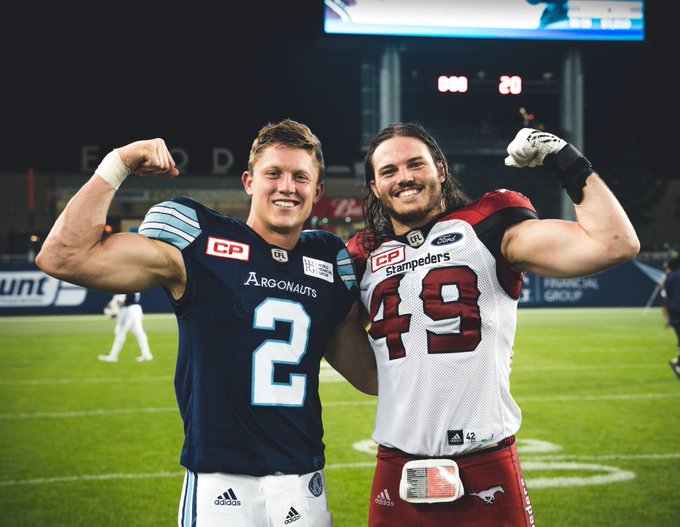 “I didn’t get to be in the final contract discussions, but I think he definitely made his decisions based on how much I loved Calgary. I think it helped him realize that he’s all in for it. He knows people, he knows the city – I would show him around every time that he would come to town with Toronto. He’s ready for Calgary and I’m excited for him.”

The pair has been friends since their college days at Montana State. After a redshirt season in 2013, Prukop played alongside Singleton during the 2014-15 seasons.

Singleton was a year ahead of Prukop and remembers seeing his growth from scout-team quarterback to the catalyst of an offence that would routinely make big plays to win games.

“It’s funny, when he first came to college, we gave him a hard time because he was the scout-team quarterback and he would run the ball in 7-on-7s. We’d be like, ‘Buddy you’ve got to throw the football,’ ” joked Singleton.

“That was the first thing I remember about Dakota. It’s the same with a lot of young quarterbacks when they go against a good defence, you don’t know where to throw it sometimes so you tuck it and run. He became this stud quarterback for us. There were games where we just needed a play and he would go out and make one. When I graduated, he transferred to Oregon and he didn’t get the opportunity I feel that he deserved.”

With Mitchell firmly entrenched as the starter in Calgary, Prukop may not get a chance to show off his skills during the regular season, but Singleton knows that his style of play can be successful in the CFL. Just look at other mobile quarterbacks such as Vernon Adams and Cody Fajardo, he said.

“He’s that dual-threat QB,” stated Singleton. “He’s kind of like (Montell) Cozart, he can make plays with his arm and his feet.

“I texted Dave the other day and I told him to tell Bo that his job is up for grabs since it seems like they’re going with speed at QB now,” he joked. “It’s funny, he’s just a dual threat guy that can make plays. He’s kind of a Vernon Adams-type guy in the way that he can make plays when you don’t think any opportunity is there.”