The History Of The Horse

The History Of The Horse

CALGARY, AB - SEPTEMBER 2, 2019: The Calgary Stampeders won 25-9 against the Edmonton Eskimos at McMahon Stadium on Monday at the Labour Day Classic. (Photo by Angela Burger/Calgary Stampeders)

A galloping horse and Stampeders football go hand in hand.

They both exude speed, majesty and excitement, all at the same time.

What would game day be without a white horse running full speed on the visitor sideline?

I recently caught up with Karyn Drake, who spent 23 years riding the touchdown steed, to get the scoop on Quick Six and the lore of the white horse.

Before Karyn was contracted in 1993, the touchdown horse – not yet named Quick Six – was a bay (brown to you non-horse folk), ridden by Cora Lee Jones and her sister, Twyla.

“I was the first one to ride a white horse,” says Karyn, from her ranch north of Calgary, where she’s self-isolating with her family. 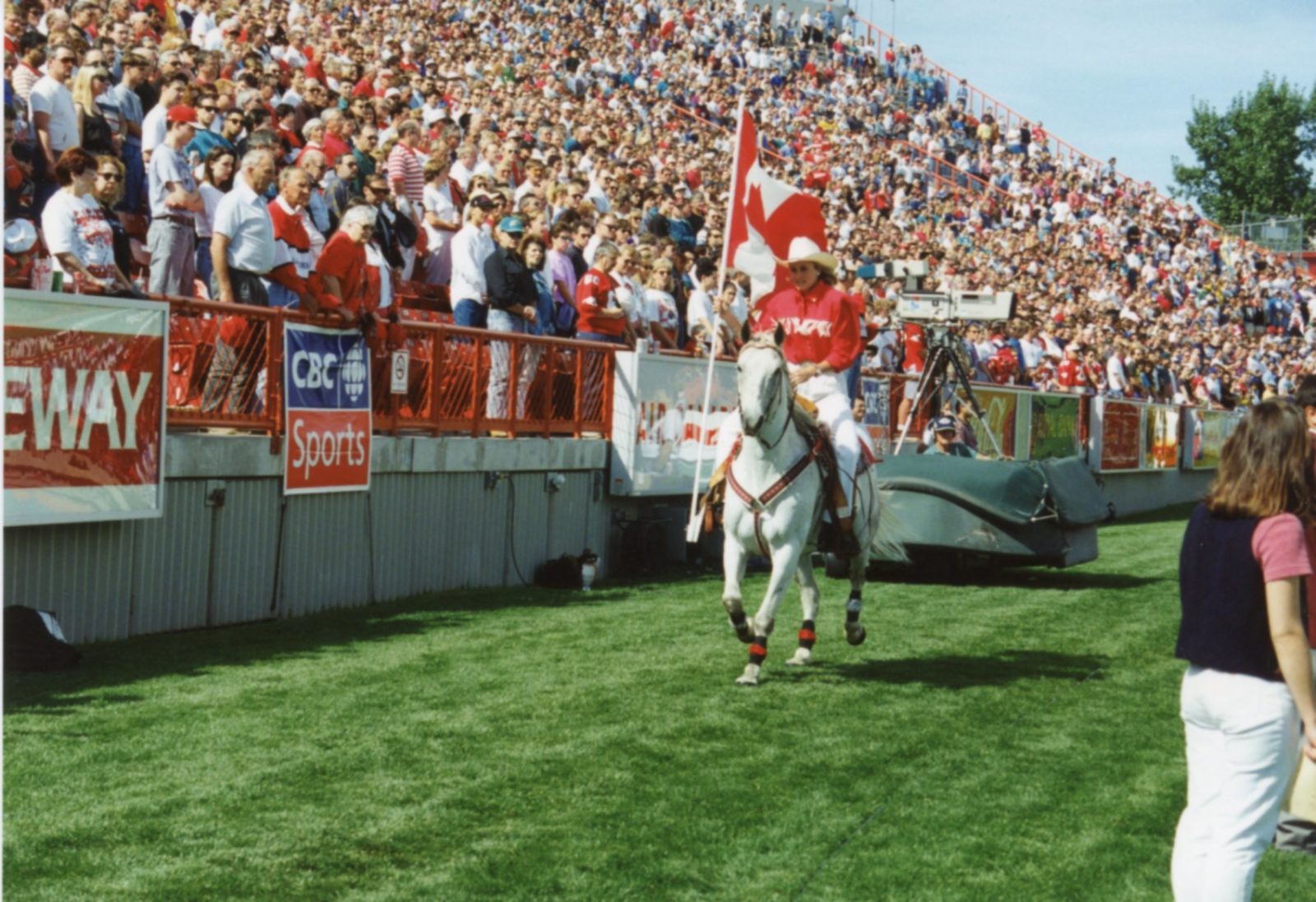 “It was the Stampeders idea and they wanted to change the look and bring in a white horse. That’s when I got the call and asked if I wanted to do it.”

“I didn’t even have to think about it, I was like ‘Yes! I will do it!’ I thought I would just ride for a few seasons, not 23 years, but it was just something that I loved. I love football and, of course, my love for horses, it just worked together.”

As a former Calgary Stampede Queen and Miss Calgary, Karyn was up for the challenge of creating an updated version for the TD celebration.

“The first white horse’s name was Albie, she was a little white quarter horse mare. The Stampeders bought her and then they gave her to me as a wedding gift (following her first season) so that was pretty cool. She only lasted about a year or two and then I switched from mares to geldings.”

“Then there was Ricky who did it for a few years. And then I got onto Blue who I leased from a cowboy by De Winton. Blue was awesome, just a nice big quarter horse and he did everything we asked him to d, and then we found Toby.”

Toby, the white horse that carried Karyn for the longest timespan of 12 years, was the first to be dubbed ‘Quick Six’ by the club. 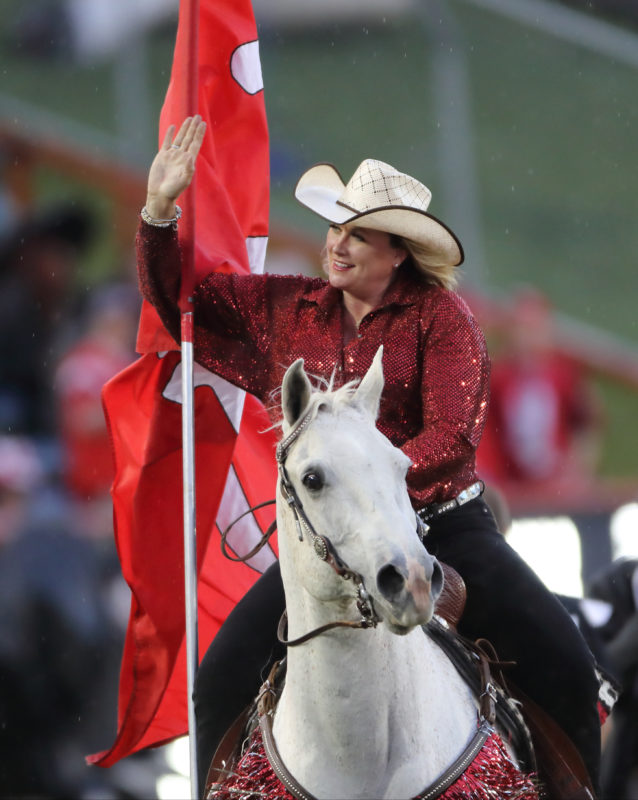 “I found him online and when I went to go look at him, I had all of my girls with me, who were quite young. He was standing behind a shelter and he poked his head around and as soon as I saw his face, he just had the kindest eye. And then the girls came out to see him and he just dropped his head and I’m like ‘Sold’! I just knew, I fell in love with him as soon as he poked his head out.”

For more than a decade, Karyn and Toby celebrated every Stampeders’ home-game major with a run down the sideline, waving a giant Red and White flag in front of thousands of screaming fans directly behind the opponent’s bench.

With all the activity on the perimeter during game day, you want to keep your head on a swivel.

Visiting teams are warned about the steady steed directly behind them when they enter McMahon Stadium.

“No players, no. I know some of the other teams, a few of the players don’t like the horse so I would ride as close to the bench as I could just to tease them. It’s our house. This is my space,” she chuckles.

As they say, every good thing must come to an end and after 23 years, Karyn decided it was time to hand the reins over and retire with her trusty mount.

Luckily, she had just the replacement in mind – her first born daughter, Chelsea.

“Toby was 24 and he was starting to slow down so we thought well, maybe we should start looking for another one. Then I thought, I’m getting up there in age myself and Chelsea was 18 or 19 and said she’d love to do it so we just thought it’s time to retire both of us and start a new team.”

With an opportunity for a fresh start, much like the one she had in 1993, Karyn found ‘Joker’ for Chelsea to make her debut on, just the second horse to be dubbed ‘Quick Six’.

“It made me so proud to be a part of such a great organization and I was sad but I was happy that I was handing the reins over, literally, to my daughter to carry on that tradition. That white horse running for the Stamps is just a special tradition for the city of Calgary I think. Our Stamps fans just love seeing the horse run down the sidelines.

“Watching Chelsea mature and gaining confidence has been incredible and I’m super proud of her. She’s handled it very well and I love how fast she goes, she just lets Joker go and has a lot of fun with him. I miss it but I think I’d miss it even more if I handed it off to someone I didn’t know. I’m just so proud that Chelsea could carry that on.” 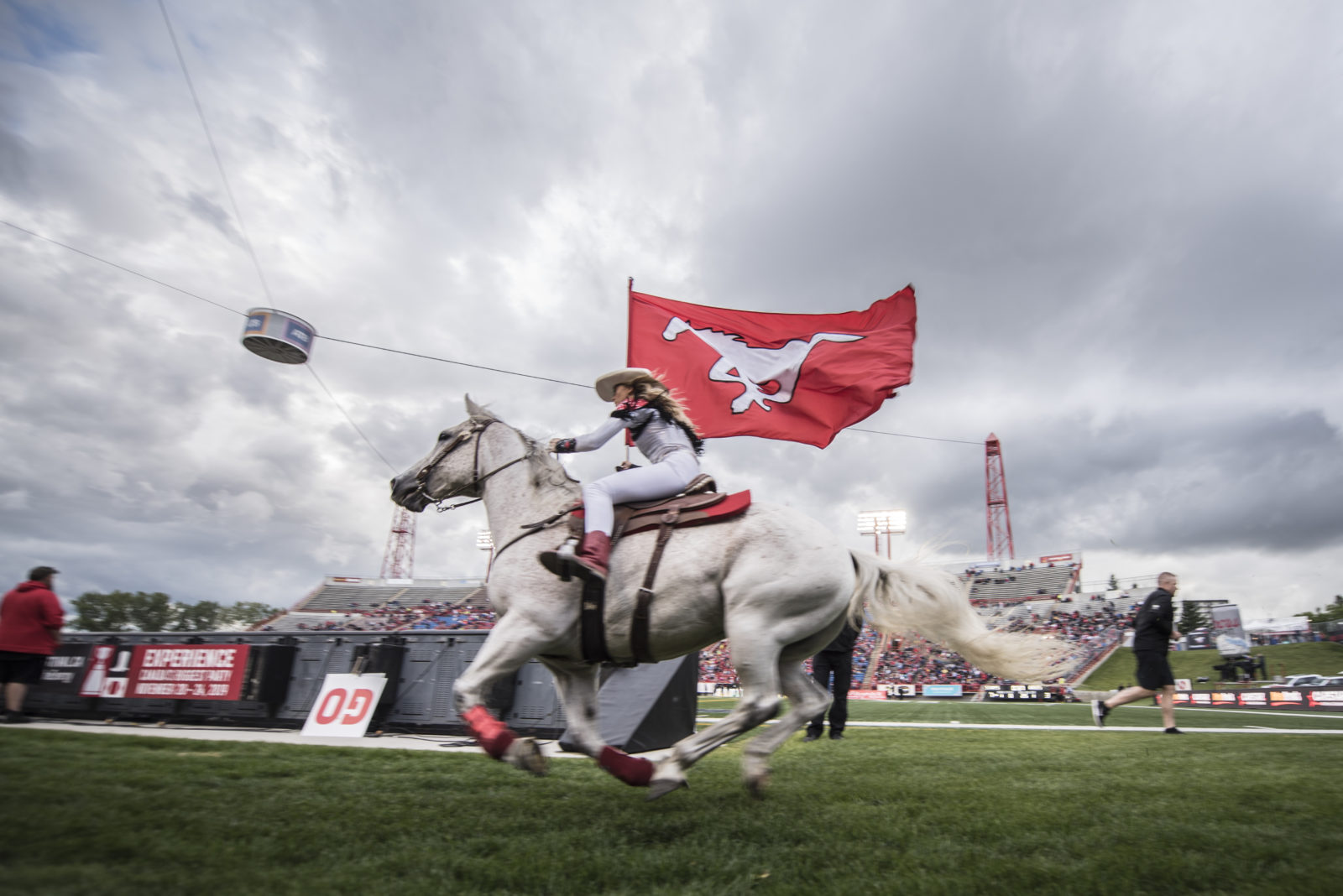