It is with great sadness the Calgary Stampeders learn of the death on Tuesday of former general manager Rogers Lehew. Added to the Stampeders Wall of Fame in 2004, Lehew was 92.

An alumnus of the University of Tulsa, Lehew came to Calgary in 1960 and served as a Stampeders assistant coach for four years. He became the Stamps’ general manager in 1965 and held the post for nine years. During his time as GM, Calgary made three trips to the Grey Cup and won a championship in 1971. 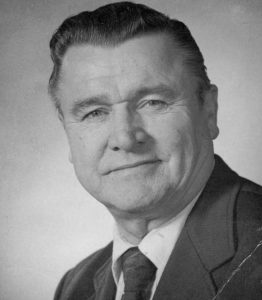 Lehew was instrumental in the introduction of a horse to the sidelines during games at McMahon Stadium, which set the foundation for the tradition of Quick Six the Touchdown Horse. He also is responsible for the addition of the white horse to Stampeders helmets and in 1967 he established the Presidents’ Ring, which goes to the Stampeders player who best demonstrates excellence on and off the field as voted by the players. In addition to his duties with the Stampeders, Lehew served as the team’s coordinator of minor football.

“Rogers is one of the most important individuals in the history of the Calgary Stampeders and he will be sadly missed,” said Stampeders president and general manager John Hufnagel. “Anyone who knew Rogers quickly realized how much he loved Calgary and the Stampeders and his contributions to the city and the franchise will never be forgotten. On behalf of the entire Stampeders family, I offer my deepest condolences to his family.”

Lehew played baseball and football at the University of Tulsa, serving as a football captain and being named the Golden Hurricane’s top lineman in 1949. He later served as head baseball coach and assistant football coach at Tulsa and was added to the university’s Hall of Fame in 1997.

Lehew served in the United States Air Force and played football for the team at Carswell Air Force Base in Fort Worth, Tex., in 1951 and 1952.

In 1974, Lehew was named vice-president and assistant general manager of the National Football League’s Detroit Lions, remaining in those roles until 1978 when he left the club to return to Calgary and pursue business interests, working in the oil patch until he retired in 1997. He remained in Calgary until the time of his death.

Lehew is survived by daughter Lora and son Larry, 10 grandchildren and three great-grandchildren, He was predeceased by his wife Joann and son Garry.