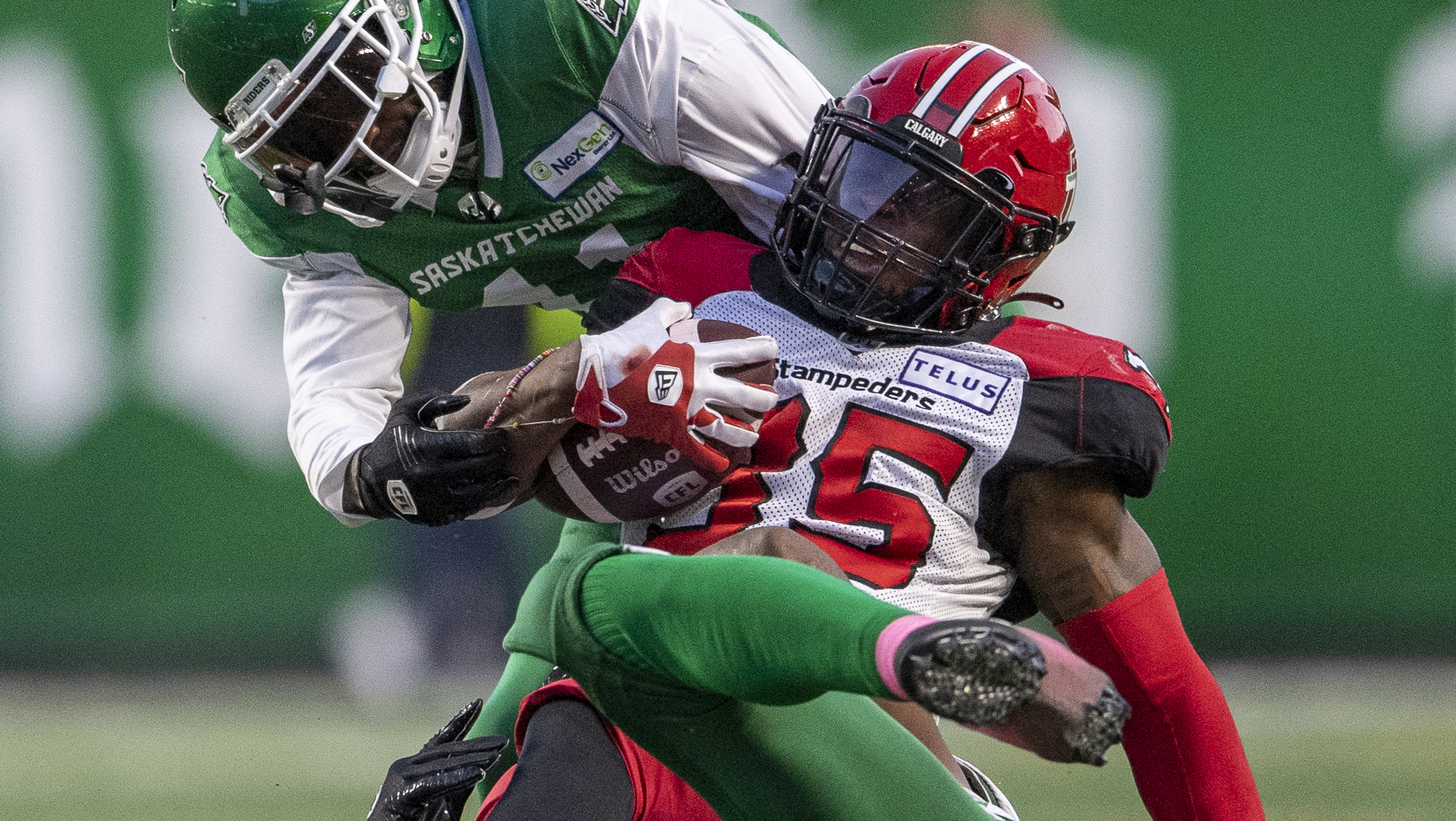 REGINA —  With 109 yards racked up on the ground, Ka’Deem Carey played a vital role in the Calgary Stampeders’ 22-19 win over the Saskatchewan Roughriders.

Heading into the week, it was up in the air if Carey would be able to play for the Stamps in their second game against the Roughriders. After suffering a back injury that saw him as a limited participant in practice and listed as questionable leading up to the game, Carey said that he felt great pre-game and credited his offence as a whole for his success running the ball.

“We have a really good O-line,” said Carey to the media. “We’re just getting going, they’re just getting warm, I’m starting to see those holes that are just ginormous. I’m just hitting them, the O-line did an excellent job today, we got 20+ runs on the ground so that’s Stampeder football.”

RELATED
» Stamps’ last-minute field goal walks off Riders for second-straight win
» Through the Lens: Stamps at Roughriders
» Boxscore: Stampeders, Roughriders by the numbers
» Mitchell goes airborne to Ambles for a TD on the first play of the game

With 690 rushing yards on the season and six rushing touchdowns, Carey believes that the Stamps’ line is just hitting their stride and only envisions things getting better for their run game.

“Ever since last week, we’ve grown like a flower,” said Carey. “The way that we’re moving forward, the energy that we have up front, the line and the aggressiveness. You can tell the boys that missed the games were excited to be out there and couldn’t wait. ”

Saturday was not the first time that Carey has had an electrifying performance in Mosaic Stadium as his visions of his first game in Riderville during 2019 danced through his head leading up to kickoff.

“It’s probably my favourite place to play,” said Carey. “It sounds weird, I love playing at home and all that good stuff but this stadium, this atmosphere, being in here, it was my first game. I always have flashbacks of that first game and I just love playing here.”

Carey was not alone in the offensive production as Bo Levi Mitchell‘s touchdown pass earlier in the game allowed the Stamps’ to lean on the run game. With the Riders now having to respect the pass, Carey was set up for rushing attempts that amazed Mitchell.

Mitchell was not alone in his assessment of Carey’s game as Dave Dickenson issued the same sentiment.

“I wasn’t sure he was going to play,” Dave Dickenson told the media.  “We brought Roc Thomas to make sure and then Ante Milanovic-litre gets a rib injury so, obviously, it’s Ka’Deem’s show and he just kept balling against a great defence. We leaned on him and he definitely delivered.”

Calgary will travel to BC to take on the Lions next Saturday at 7:00 p.m. ET before returning home for the conclusion of their three-game series with the Riders.