Bo Closing In On 30k Not A Surprise To Mcdaniel

Bo Closing In On 30k Not A Surprise To Mcdaniel

The 30K Club is pretty exclusive.

But Stampeders quarterback Bo Levi Mitchell is about to receive his membership.

Sitting just 14 yards shy, he should become the 18th player in CFL history to throw for that mark when Calgary visits the Ottawa RedBlacks.

If he achieves the feat Friday, he will match Michael Reilly as the fifth-fastest quarterback to reach the plateau.

Now, while a quarterback gets the glory for having gained so many yards, it’s his receivers, running backs, full backs – and the occasional linemen – doing plenty of the heavy lifting when it comes to hauling in catches.

With that in mind, we looked back at every player Bo Levi Mitchell has completed a pass with and calculated how many yards they earned with him at the helm. The gunslinger has connected with 66 different pass catchers over nine seasons. 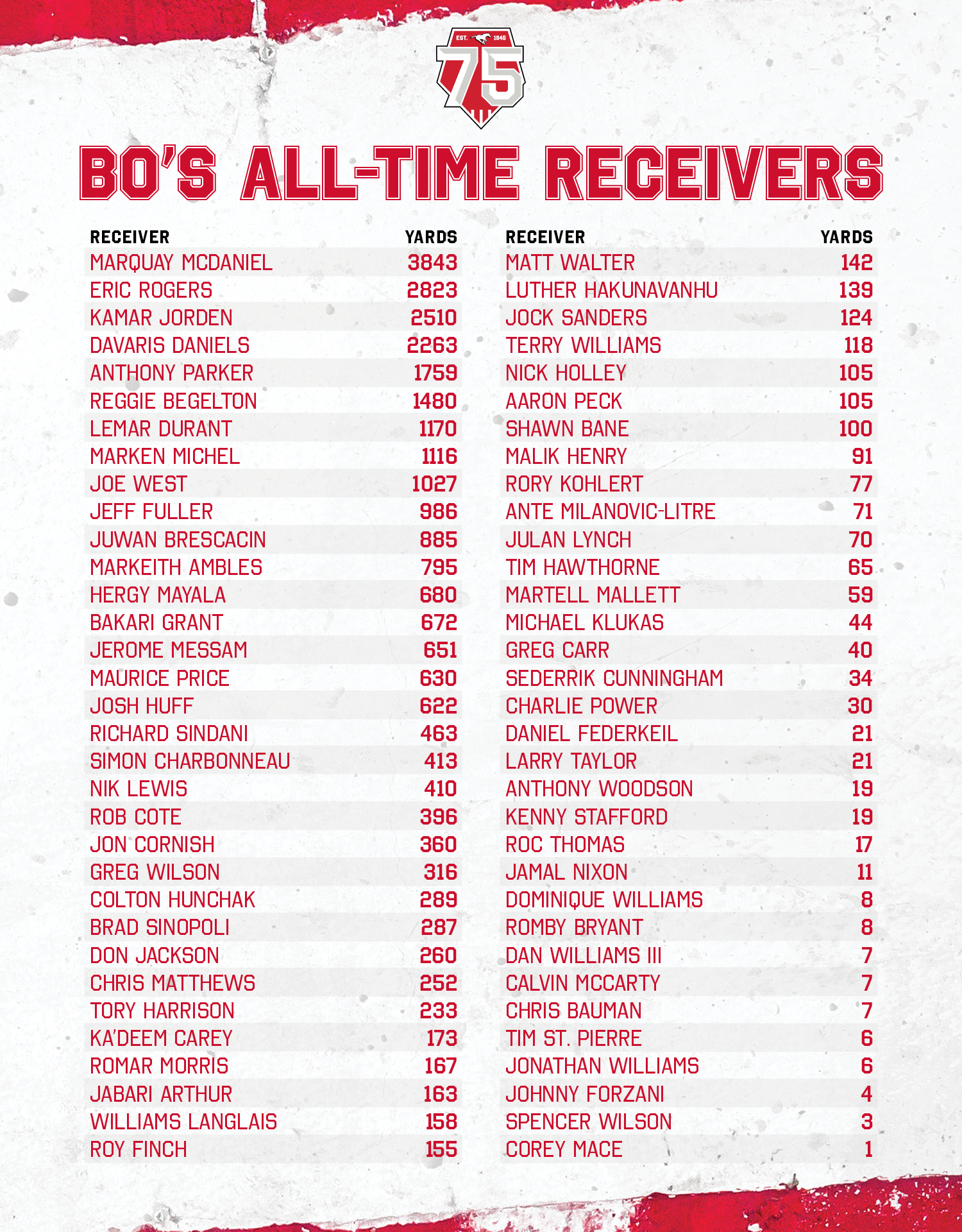 Marquay McDaniel – his top target – a teammate of Mitchell for five years and now a coach with the Stampeders, could tell that his quarterback was something special from the first time he walked into McMahon Stadium.

“I’m not surprised at all that he’s gotten here,” McDaniel said.

“Just from day one, even before he got the start, you know you could see it at practice. He used to sit in front of me and I would see him taking notes preparing as if he was the starter even though he wasn’t at the time. That was the first thing I saw and then when he gets on the field you see that big arm and knowing he’s from Texas, you know people from Texas love football. He’s a complete quarterback, I mean the first year he got in there he won the Grey Cup so yeah you could see it from practice when he wasn’t playing – how big of an arm he had and he was always a student of the game.”

Having been on the receiving end of nearly 300 passes from Bo Levi Mitchell, Marquay McDaniel is uniquely qualified to speak to what separates him from all the other quarterbacks in the CFL.

So, what it is about Mitchell that has enabled him to join the elite 30K Club?

“Like I said, from day one when he got that first start that first year you could kind of see he was making a lot of good decisions to make all the throws. You get a quarterback that can do that and it makes it easier on the receivers,” he explained. “As long as you’re where you’re supposed to be he’ll get you the ball. He’s one of those quarterbacks where he was throwing you balls and as soon as you caught it, it was right on the money. Very accurate, that’s a key word I would use with him because he can definitely hit you and let you get YAC after the catch. His accuracy is huge; I know from being a player with him.

“And another thing, too, is Bo sees things fast; he can see defences and make a decision fast. He gets the ball out quicker than probably any quarterback I’ve seen in this league. It’s just making those quick decisions so I think that’s one thing he does well. He studies the defences, sees things coming and he knows our offence like the back of his hand so once he sees something, like I said he has that arm to make all the throws, so his quick decision making helps him to be good, too.”

Friday night won’t be the first time the two men have been together during a major milestone for Mitchell. McDaniel was on the receiving end of a landmark score in 2017.

“We were just talking about the Tom Brady situation when he had his 600th touchdown and his receiver threw it in the stands, because I did the same thing with Bo,” chuckled McDaniel. “I caught his 100th touchdown and I threw it in the stands because I didn’t know right. So when you look back on stuff like this, and I saw the list last week – the reception list – and I was at the top and I honestly didn’t know I caught like almost 300 balls from Bo. When you’re done playing you look back on stuff like that and kind of sit back and look at all the guys you’ve played with.”

The boy who so nicely returned Bo’s 100th TD ball gets a surprise from his favourite player @_McDaniel16 👍🏼 pic.twitter.com/rVw5oOIqkh

And with more football will come more records, more awards, and maybe even a certain post-career distinction.

“Top 10 in yards? Yeah, I think he can get there,” said McDaniel. “Because he began starting in 2014 and this is 2021 with a missed season … I think he can crack the top 10, if he’s at 30 thousand already, in seven years, I mean you would think he has another seven in him, so I definitely think he can break the top ten. I could see him getting in that 60 thousand range easily, depending on how long he plays and hopefully him staying healthy.

“I mean Bo is still so young you know having all these records and still chasing records that he can actually hit, I think he’s definitely putting together a hall-of-fame career. When it’s all said and done, he could be looked at as one of the best to ever play in this league, so to play with a guy like that for so long, you definitely appreciate that once you’re done playing.”