We’ve already unveiled the first 60 names of the Top-75 Stampeders players of all-time. With 15 names to go, we present to you the next 10! But first, how did this list come together?

After being the fifth overall draft pick by the Montreal Concordes in 1986, Finlay would spend just a single year in La Belle Province before leaving for Toronto, where he would play just one game and then be brought in to Calgary for the remainder of the 1987 season and beyond. The Canadian linebacker played in 167 career games, logging 556 tackles, 18 sacks, and 10 interceptions. His greatest season came in 1992, when he recorded his only 100 tackle season en route to helping the Stampeders claim a Grey Cup championship. 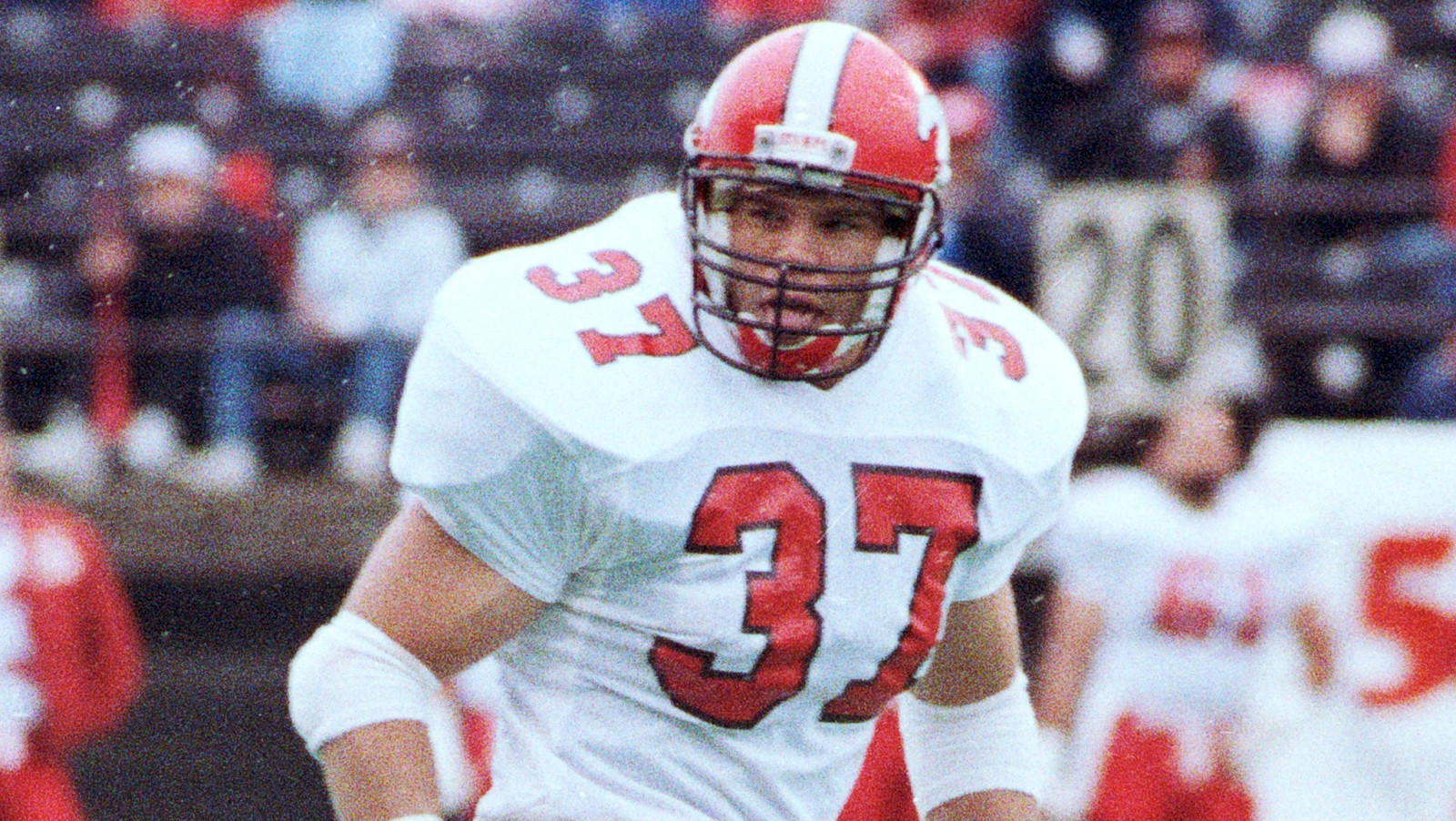 A Winnipeg native, Furlong was a versatile player for the Stampeders, lining up as an outside linebacker and as a punter. He would play 13 seasons with the Red & White, suiting up in 174 games, making 707 punts for 28,898 yards, 15 interceptions, and 11 fumble recoveries. As a member of the Stampeders, Furlong made three appearances in the Grey Cup, but would only win one championship in 1971. 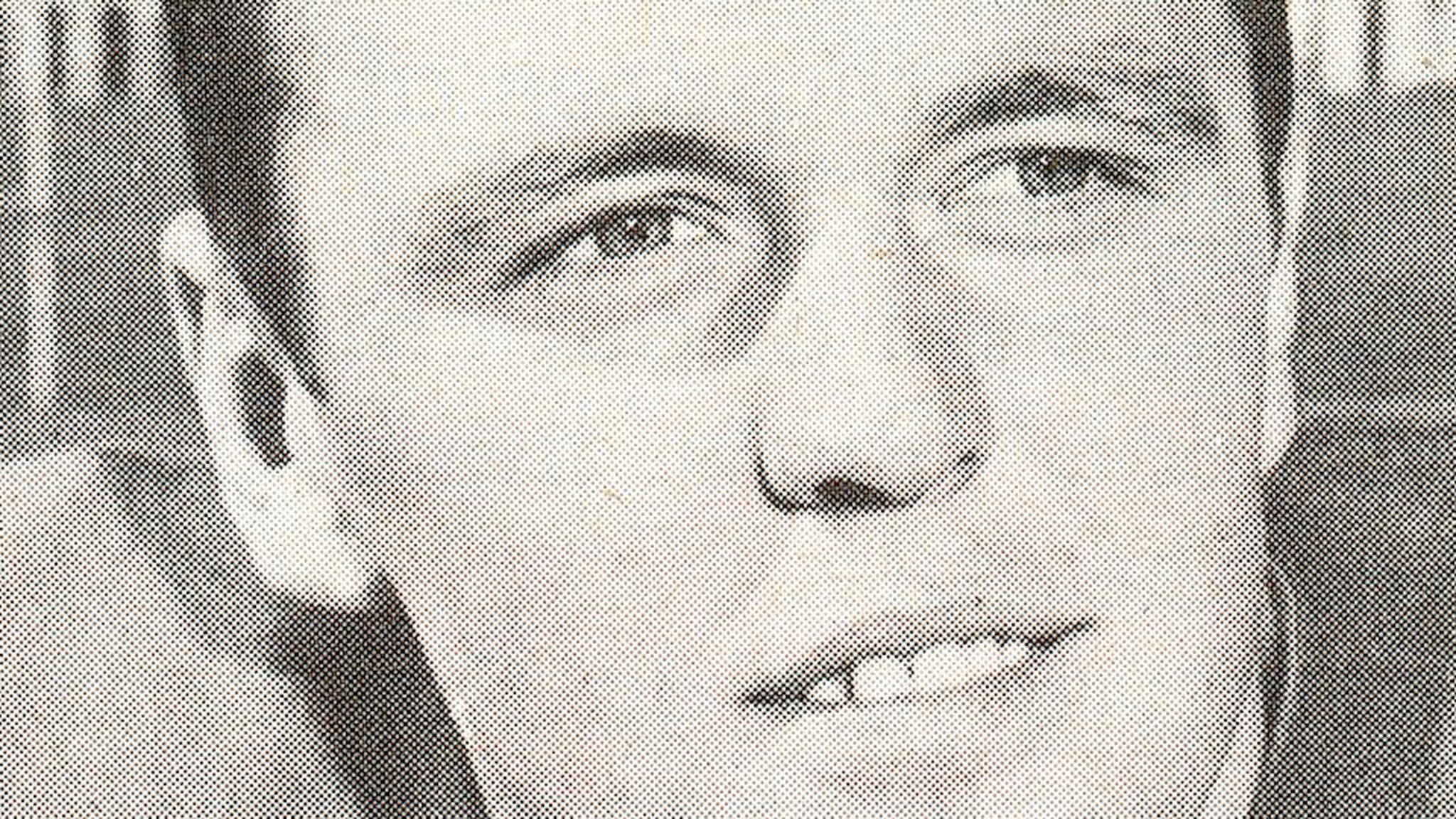 One of the most accurate kickers to ever play in the CFL, Rene Paredes has been a stalwart for the Stampeders over the years. His consistency (as proven by his team headshot every year), has been invaluable for the Red & White. The 11-year veteran holds a career 87.3% (440/504) mark on field goal opportunities, missing just 64 kicks in 11 years. Throughout his career, Paredes has made 9 walk-off game-winning field goals. Paredes has racked up the accomplishments over the years, being recognized as a West All-Star four times (2012, 2013, 2015, 2017), a CFL All-Star three times (2012, 2013, 2015), and the CFL’s Most Outstanding Special Team’s Player in 2013. He is also a two-time CFL champion, winning the Grey Cup with the Stampeders in 2014 and 2018. 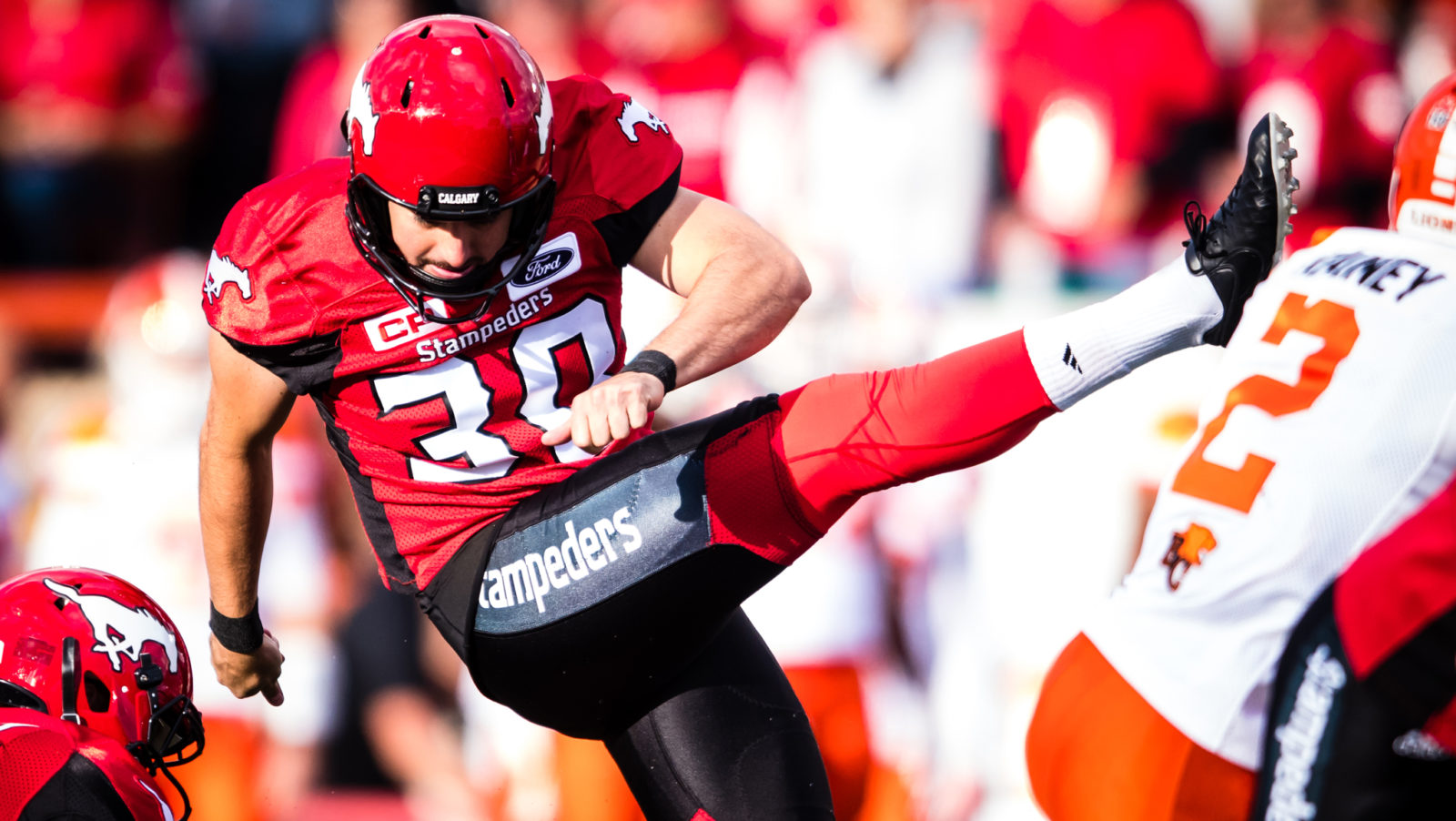 It takes a special player to push a Hall of Famer out of the lineup, but that’s just what James Sykes did when he took over for Willie Burden in 1978. Sykes stepped in and was immediately an impact player for the Stampeders, racking up his first of four 1,000 yard seasons. In his CFL career, Sykes would play in 85 games between the Stampeders and Blue Bombers, compiling 5,970 rushing yards, 2,286 receiving yards, and 53 total touchdowns. While Sykes would never win a championship with the Stampeders, he would receive other awards during his time in the Red & White. Sykes would earn CFL All-Star recognition in 1978 and 1980. 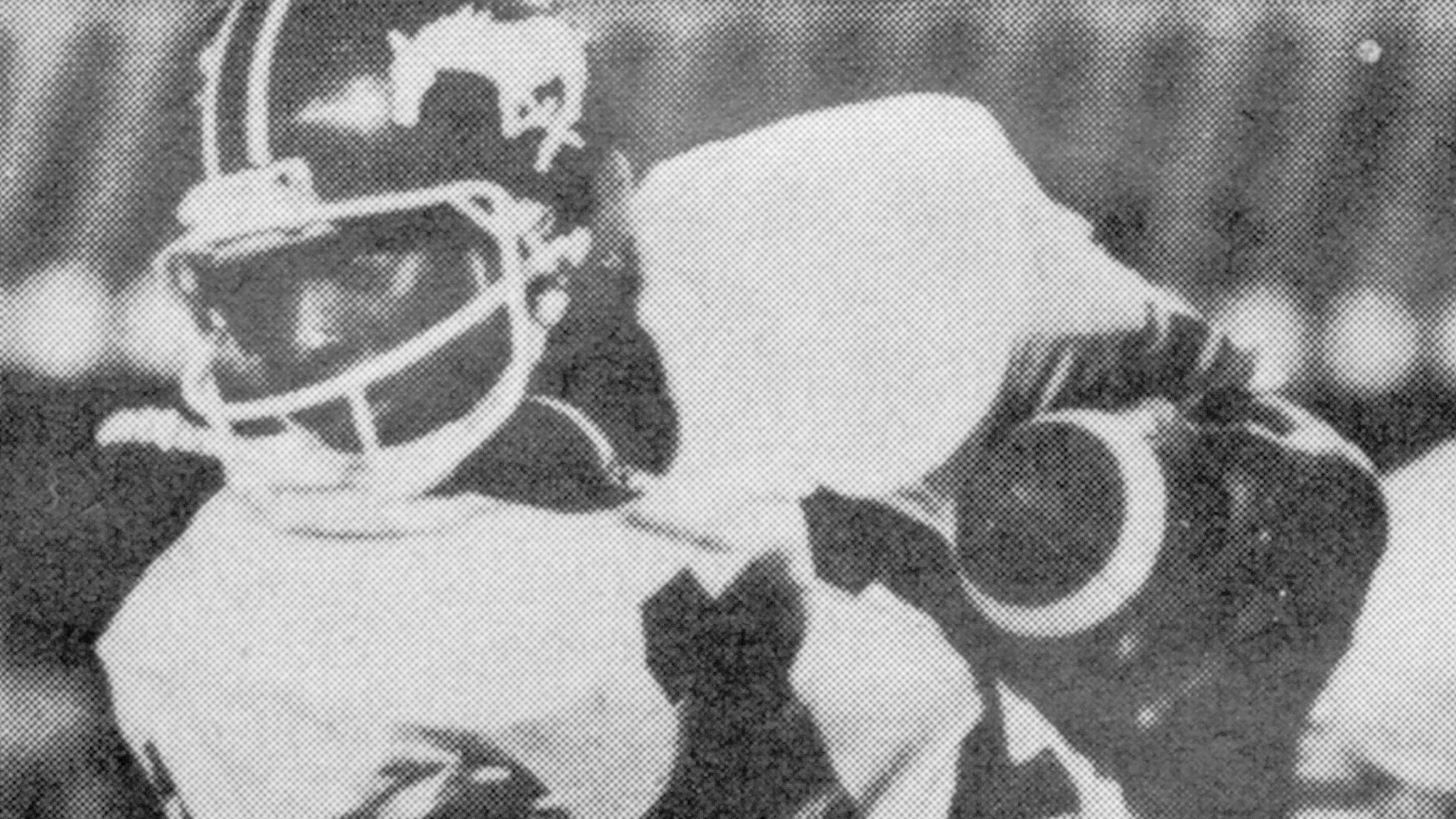 A Calgarian, born and raised, Linterman joined his hometown team in 1968. He would go on to suit up in 157 career games, 147 games with the Stampeders. Linterman would accumulate 1,399 rushing yards and 4,908 receiving yards in his career, adding 20 total touchdowns. His most recognisable contributions remain his 68 yards of offence to help the Stamps earn a victory over the Toronto Argonauts in the 1971 Grey Cup. Linterman was added to the Stampeders Wall of Fame at McMahon Stadium in 2012. 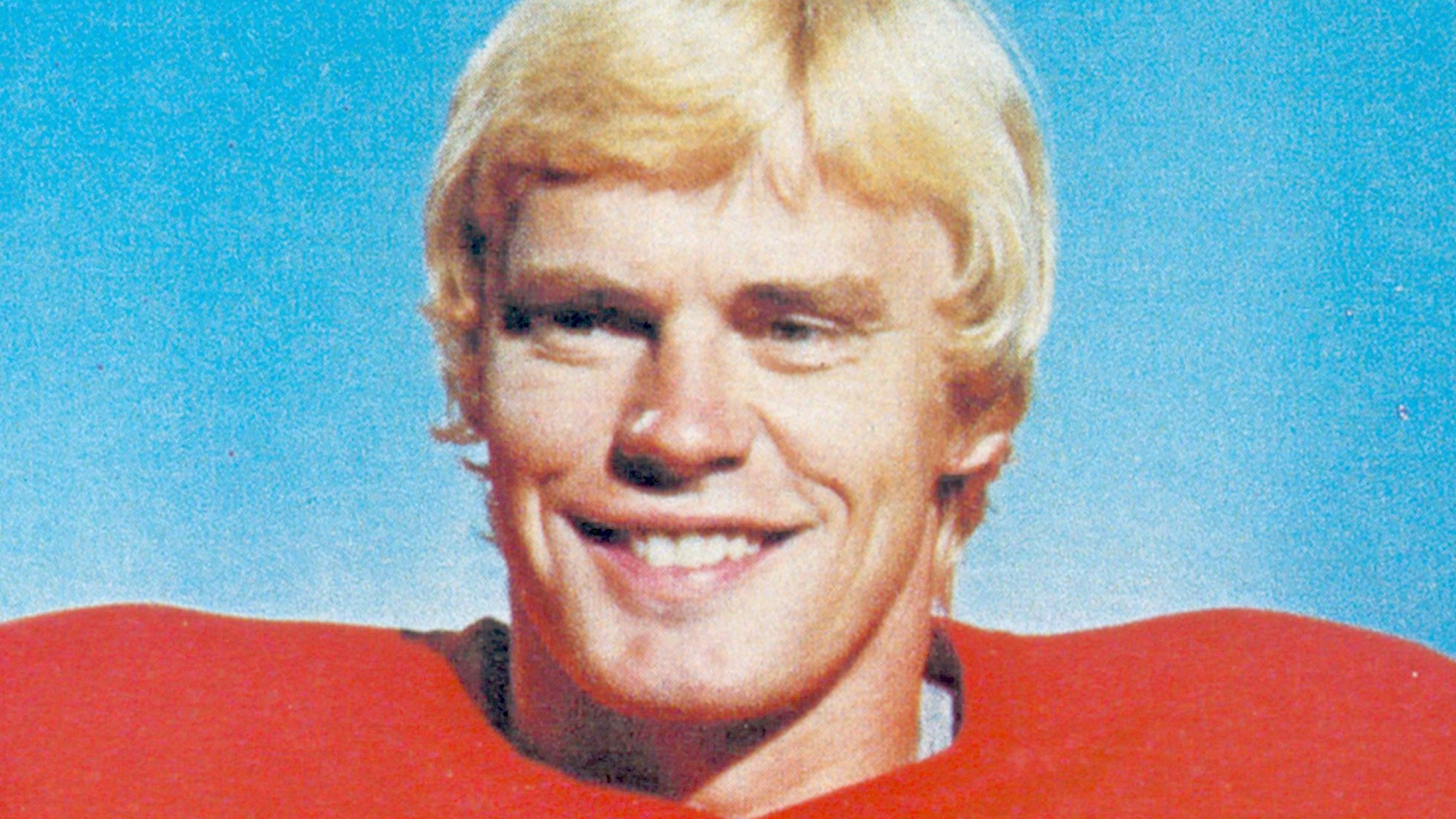 Despite a three-year stint in the NFL during the prime of his career, Darryl Hall still managed to put together an incredible CFL career. Hall Joined the Stampeders in 1990 and within a season was already considered a CFL All-Star. He would earn that award in 1991 and 1992, caping the ‘92 season off with a Grey Cup championship. After winning, he would head south for a pair of seasons with the Denver Broncos and one with the San Francisco 49ers. He would make his triumphant return to the CFL in 1996, where he would once again play at a very high level. He would earn CFL All-Star nominations from 1997-2000 and adding another Grey Cup championship in 1998. Hall finished his career with 546 tackles, 11 fumble recoveries, 18 sacks, and 13 interceptions. 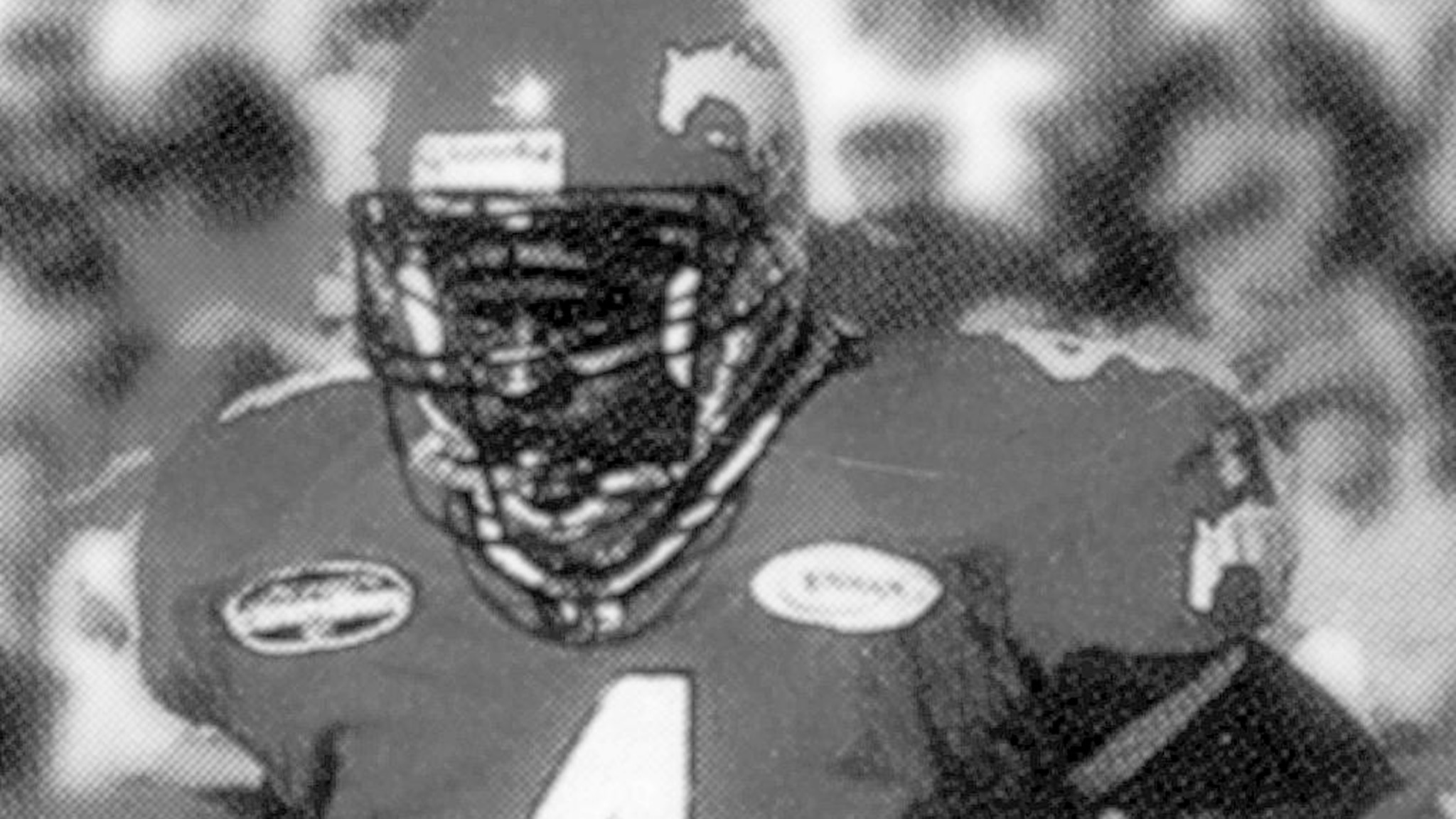 After beginning his CFL career with the Ottawa Rough Riders in 1978, Hay was traded to Calgary for DB Doug Falconer. For the following decade, Hay was the Stampeders placekicker, where he would be a West All-Star in 1986. In the CFL, Hay played in 172 games, connecting on 308 field goals and 363 extra point converts, which totals 1,411 points. Hay also contributed on kickoffs, logging 650 such kicks for 36,58 yards. Hay was added to the Stampeders Wall of Fame at McMahon Stadium in 2006. 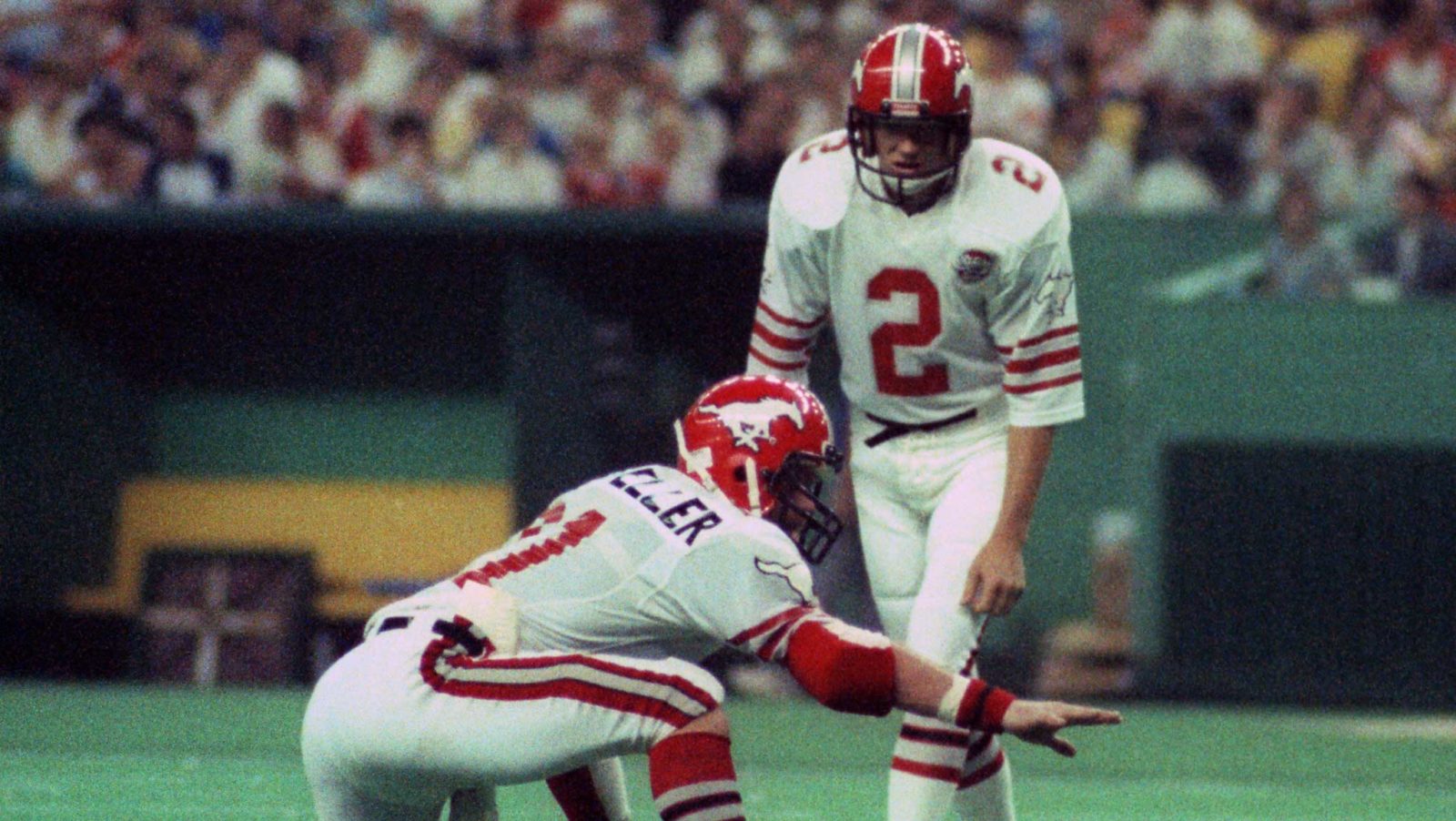 JT Hay during the 1984 season (Photo by Scott Grant)

Larry Robinson did it all during his 14-year career with the Stampeders. He was a kicker, punter, defensive back, and he was even a receiver early on. His longevity, success, and versatility are big reasons why he is still regarded as one of the best to ever suit up in the Red & White. A local player, Robinson played in 224 games with his hometown team, never missing a single contest. As a kicker, he recorded 1,030 points on 171 field goals and 362 extra point converts. As a defensive back, he was outstanding, recording 50 interceptions which still stands as the most by any player in Stampeders history by 15. A West All-Star in 1965, 1971, and 1972, Robinson was also a key member of Calgary’s 1971 Grey Cup championship team. Robinson was elected to the Canadian Football Hall of Fame in 1998. 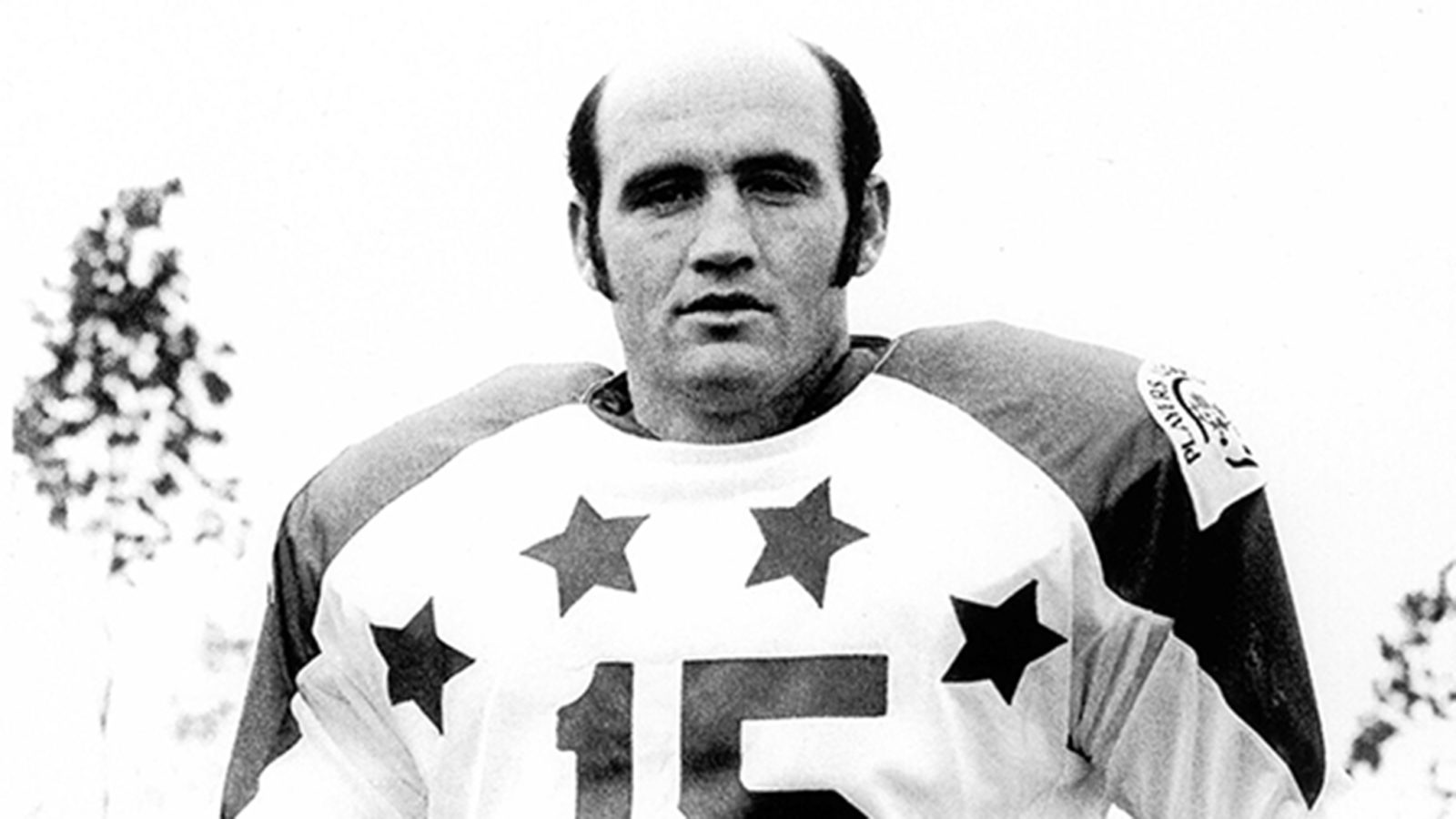 Selected with the Stampeders first round draft pick in 2010, Maver would start his career as the team’s place-kicker. After a solid first season, where he connected on 78.7% of his kicks, Maver missed almost the entire 2011 season, opening the door for Rene Paredes. Upon return, Maver would relinquish kicking duties to become a full-time punter. From that point, Maver would evolve into the league’s best punter, earning West All-Star nominations from 2012-2014 and CFL All-Star recognition in 2012 and 2013. He’s also a two-time Grey Cup champion, winning the big games in 2014 and 2018. 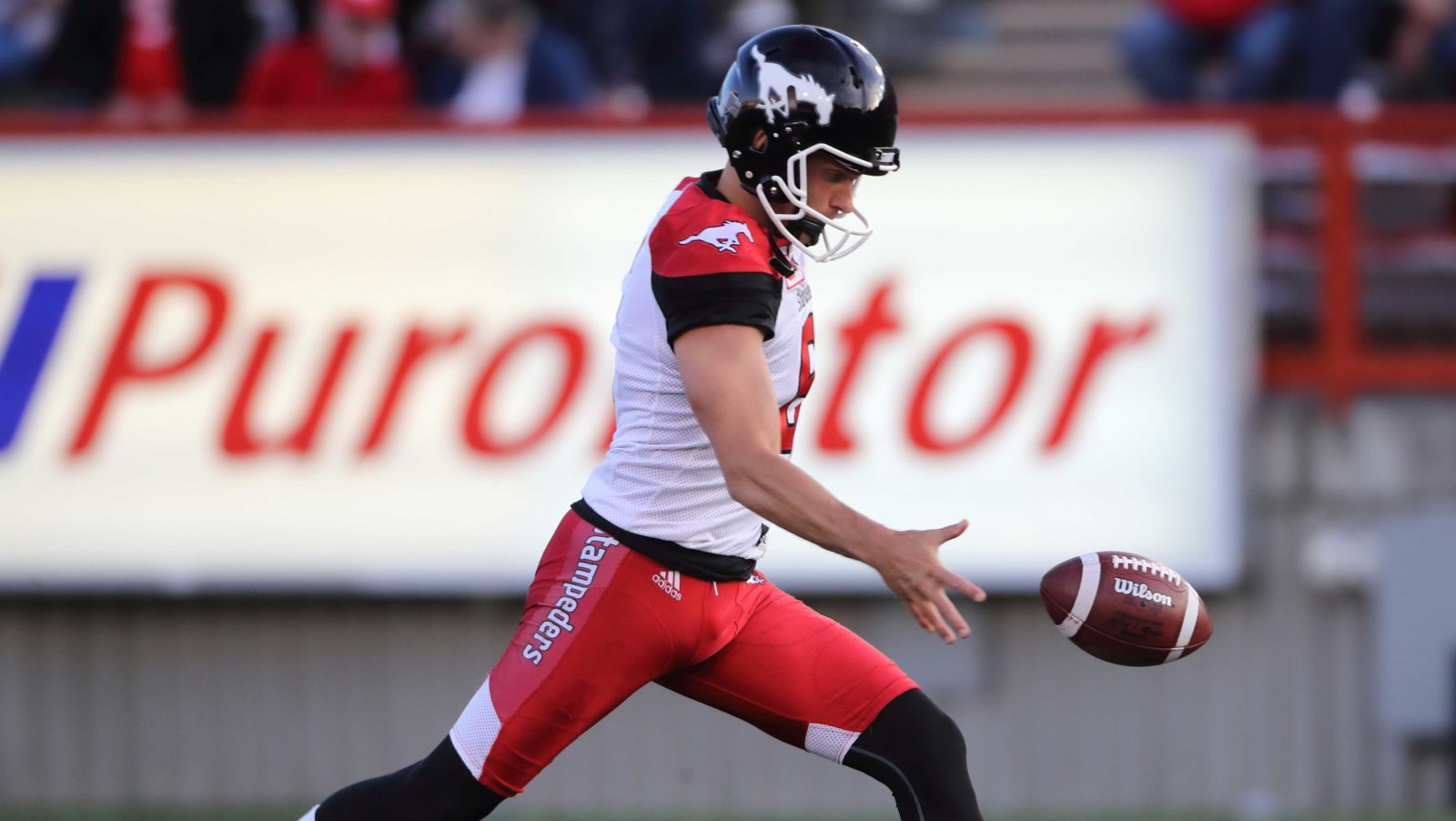 Punter Rob Maver during a pre-season game on June 6, 2017 (Photo by David Moll)

A five-year starter with the University of Calgary Dinos, this Calgary kid kept his football career at home when he joined the Stampeders in 1984. Laird would play 12 seasons with the Red & White, suiting up in 170 games. Rushing the passer was Laird’s calling card throughout his career, sacking opposing QB’s 72 times, which put him third all-time amongst Calgary rushers and behind only Will Johnson and Charleston Hughes. In addition to his sack total, Laird compiled 219 tackles, 13 fumble recoveries, and one interception. During his career, he compiled numerous awards, including a West All-Star nod in 1994, three Presidents’ Rings (1988, 1992, 1995), and of course, a 1992 Grey Cup championship ring. His number 75 was retired by the Stampeders in 1996 and he was added to the Wall of Fame at McMahon Stadium in 2014. 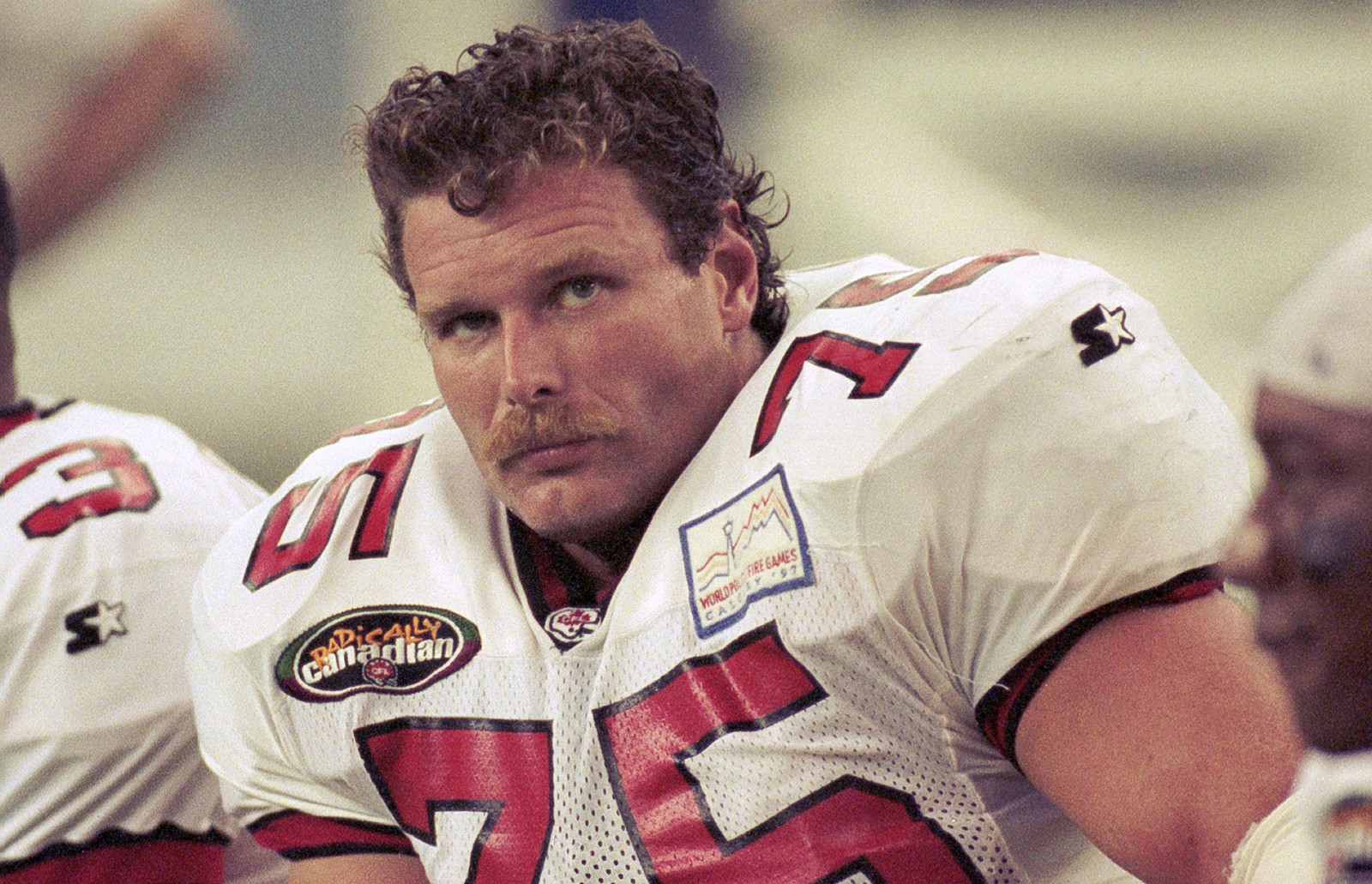 Stu Laird with the Stampeders in 1996 (Photo by John Bradley)