It’s finally time for the Top 5! While none of the other 70 names that we announced were ranked, these five have been specifically chosen as the Top 5 Stampeders of All-Time! But first, let’s look at how the list was made:

When you think of the Stampeders, often some big name quarterbacks come to mind, but perhaps no one more represents the Red & White than Wayne ‘Thumper’ Harris.

The native of Hampton, Ark., played his high school and collegiate football in state before taking his talents elsewhere for his professional career. Drafted by the Boston Patriots of the American Football League, Harris instead opted to head north for an opportunity with the Stampeders. The quick, yet powerful, middle linebacker would go on to play his entire 12-year career with Calgary and would become one of the most dominating defensive players in CFL history.

An aggressive attacker, Harris would routinely dish out some incredible hits on his opponents. That hard-nosed tackling would result in numerous forced fumbles and 23 fumble recoveries over the course of his career. Speaking of turnovers, Harris would add 28 interceptions from his linebacker position. Because of the era of football in which Harris played, statistics such as quarterback sacks and tackles were not recorded, although it’s well understood that he would be near the tops of those categories amongst the Stampeders all-time ranks.
Despite being on the small side for players at his position, Harris would break the mould and become a generational linebacker. With his combination of speed, aggressiveness, and intelligence, he would confound defences and do things that other players at his position could not. A true sideline-to-sideline player with the ability to knock your block off, Harris was a special player and The Greatest Stampeder of All Time. 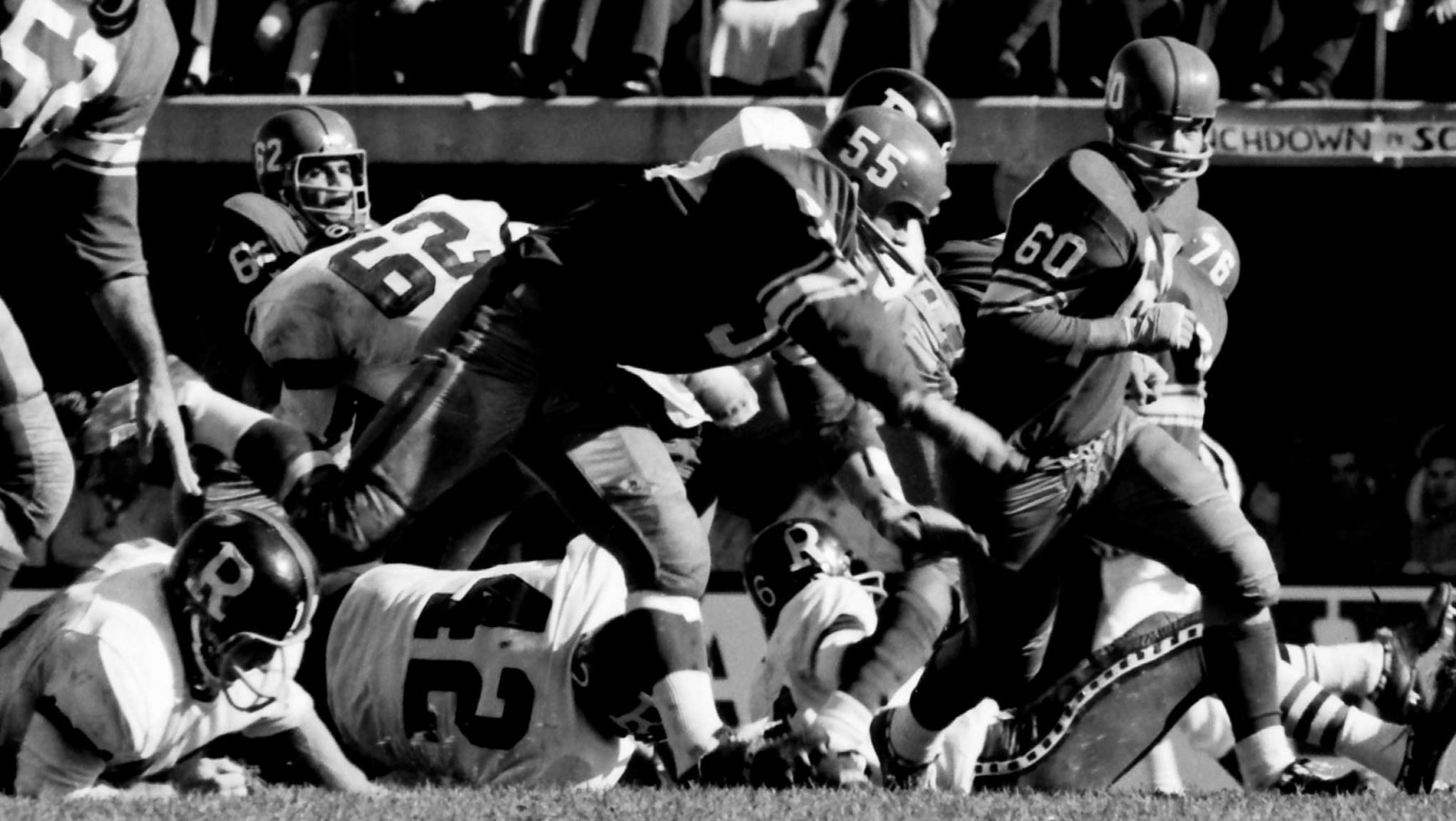 Maybe the most dynamic quarterback to ever lace ’em up in the CFL, Flutie earned his place in the Top 5 of this list with just four years at the helm for the Red & White.

After a pair of seasons with the BC Lions and coming off of a CFL Most Outstanding Player award, Flutie and the Stampeders made a major splash in free agency when they agreed on a deal to bring the quarterback east of the Rockies.

Flutie would continue his dominance of the CFL over the next three years, winning back-to-back-to-back Most Outstanding Player Awards with the Stampeders and helping lead the team to a Grey Cup victory in 1992. In the 1994 season, Flutie threw 48 touchdowns, which still stands as the most passing touchdowns in a single CFL season. He also holds the record for most yards thrown in a single-season with 6,619 yards in 1991.

Flutie would go on to play two seasons with the Toronto Argonauts in 1996 and 1997, where he would win back-to-back Grey Cups.
Over his eight years in the league, Flutie suited up in 135 games and would compile 41,355 passing yards (9th all-time), 270 passing touchdowns, 4,660 rushing yards, and 10 scores on the ground. Those statistics earned him many accolades, including CFL All-Star nods in 1991, 1992, 1993, 1994, 1996, and 1997. In each of those seasons, he was also recognized as the league’s Most Outstanding Player. He missed out on the award in his rookie season and in 1995, when he was limited to just 12 games due to injury.
One of the greatest to ever play in the CFL, it’s hard not to imagine the things he may have accomplished had he not left in 1998 to play in the NFL for the next eight seasons. 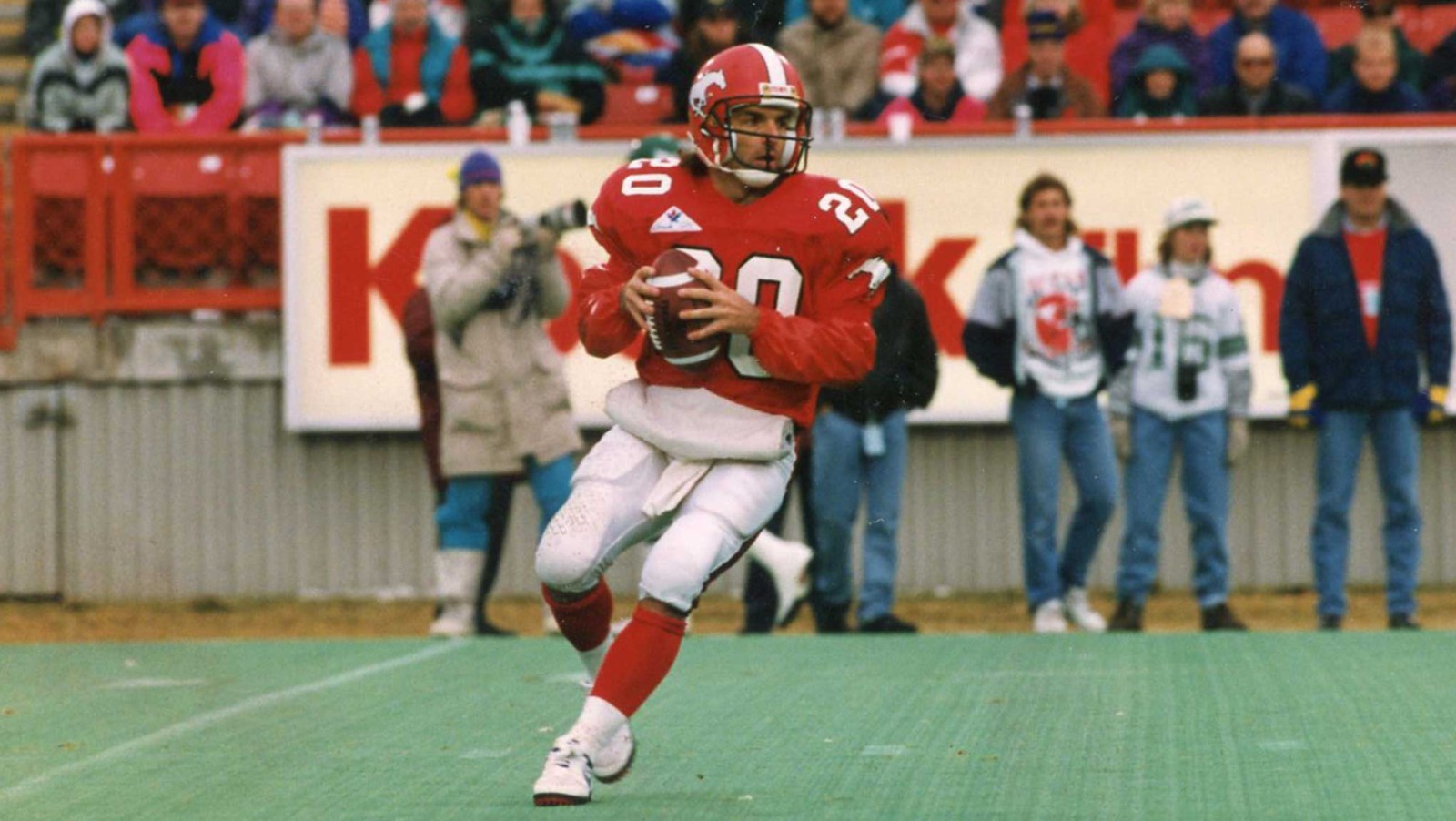 A truly dominating force in the middle of the Stampeders defence, it’s a shame that Helton’s era of CFL football did not track quarterback sacks. He was undoubtedly one of the best-ever defensive tackles to play in this league, but there are so few stats and video records to preserve his memory.

Helton played 10 seasons with the Stampeders before finishing his career with four seasons in Winnipeg. In each of his 10 campaigns with the Red & White, Helton was recognized as a CFL West All-Star. Over his 14 years in the CFL, Helton played in 217 games, missing just seven outings over that stretch.

While we may never know his true tackle or sack totals, we will always remember Helton for his role in helping the Stampeders claim the 1971 Grey Cup over the Toronto Argonauts. He was also memorialized in the Canadian Football Hall of Fame in 1986 and in the Alberta Sports Hall of Fame in 1993.

Nicknamed ‘Biggie’, Helton certainly was that, dominating grown men on the football field and doing the same in Stu Hart’s legendary Stampede Wrestling. 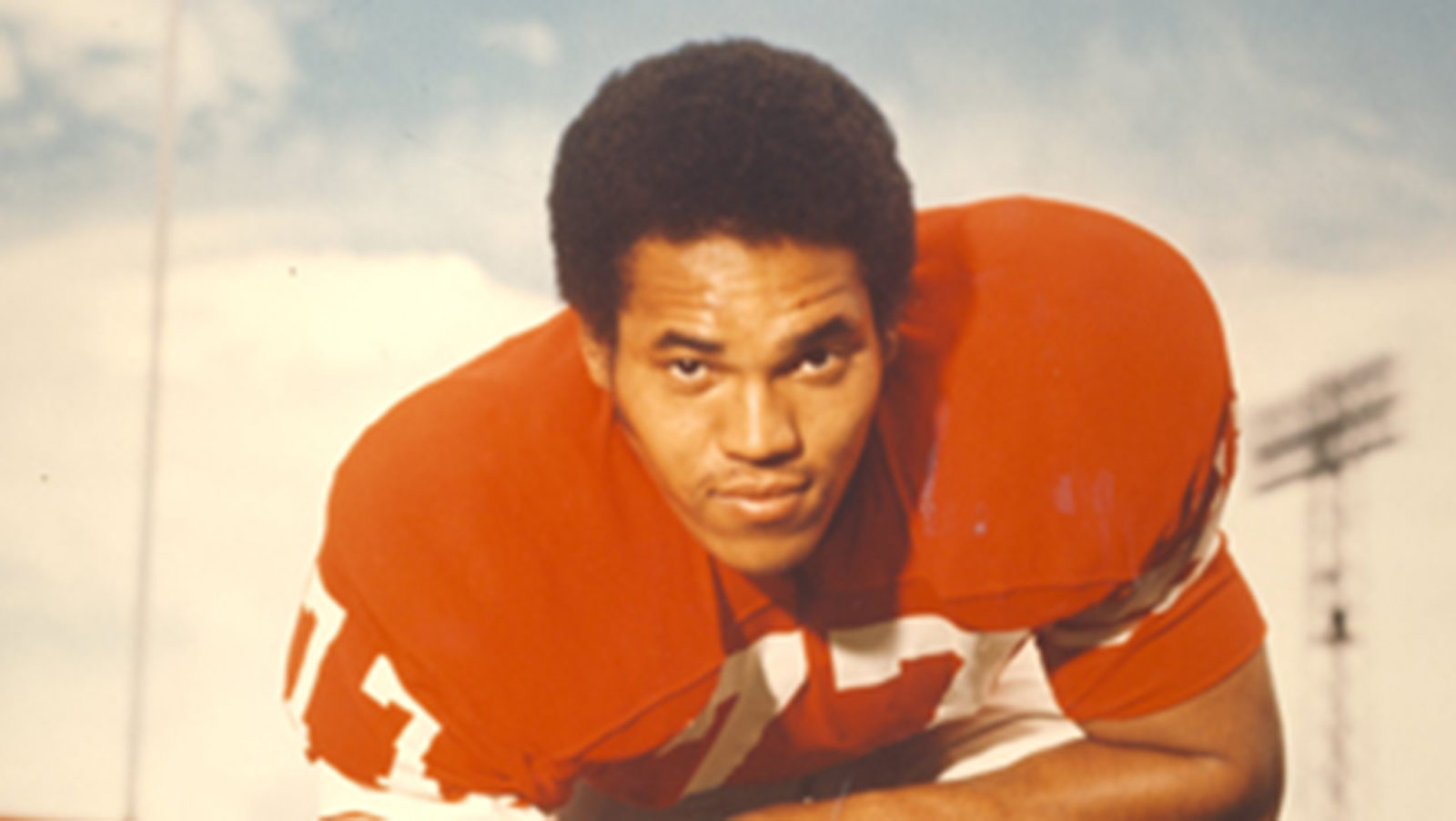 Mitchell – otherwise known as ‘The Gunslinger’ – signed on with the Red & White in 2012 but didn’t really get any significant action until the 2013 season. In 2014, he would take the reigns as the team’s starting quarterback, beginning his current seven-year run as the man under centre.

In his first full season, Mitchell led the Stampeders to a 15-3 record, throwing for 3,389 yards and 22 touchdowns with just eight interceptions. Calgary would go on to win the Grey Cup, beating the Hamilton Tiger-Cats 20-16 at BC Place and the Stamps signal caller would be named the Grey Cup’s Most Outstanding Player.

Mitchell would continue to produce year-after-year for the Stampeders and he would lead the Red & White to three consecutive Grey Cup appearances from 2016-2018. While the team would fall in 2016 and 2017, Mitchell would get the job done in 2018, winning his second Grey Cup Championship. 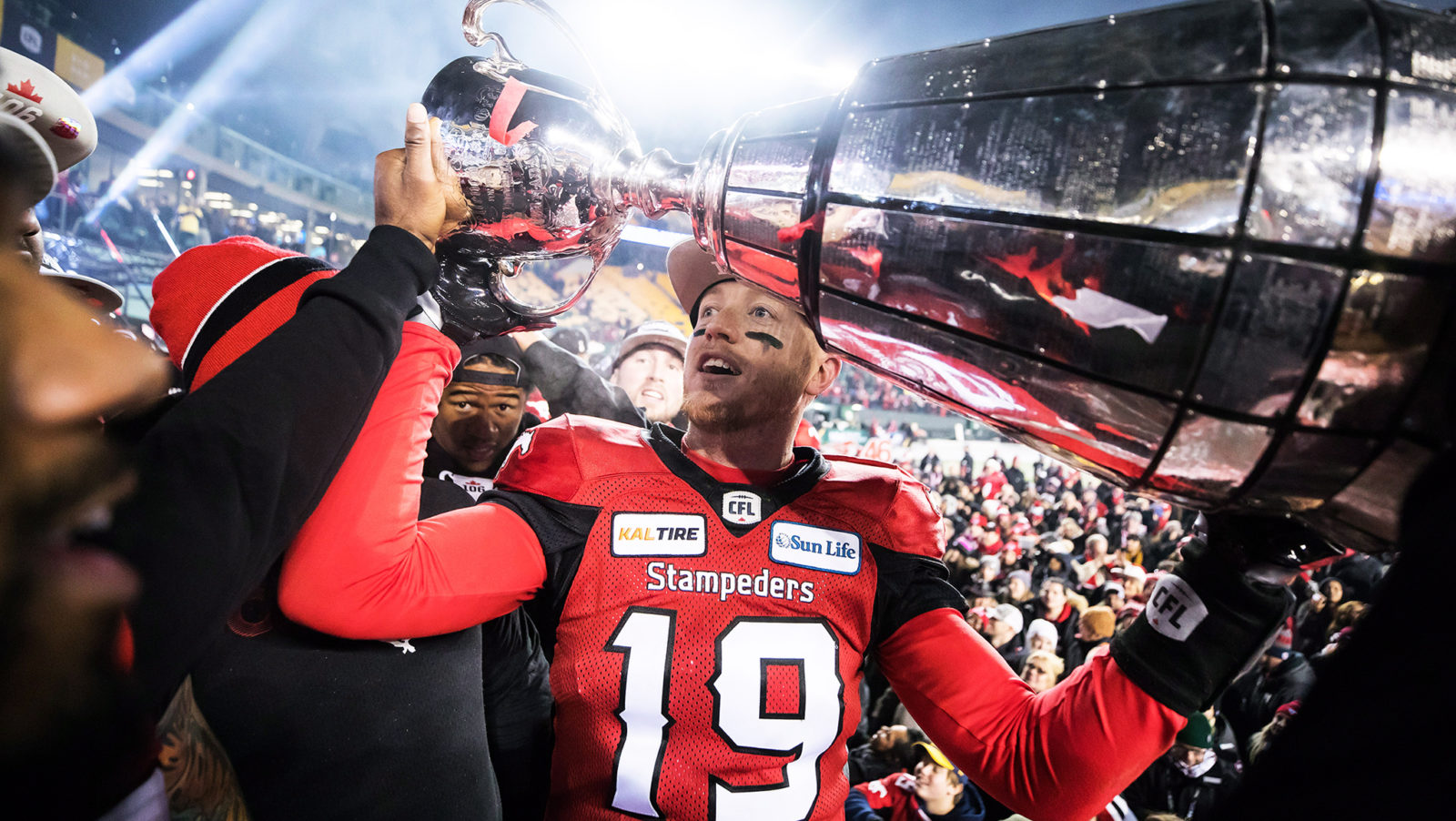 Perhaps the most dominant receiver of his era, Pitts was a consistent deep threat in the Calgary offence and he demonstrated strong hands, rarely dropping a ball.

Pitts played in five Grey Cup games during his career and was instrumental in winning the 1992 and 1998 Grey Cups.

Twice during his tenure with Calgary, Pitts was named the team’s nominee for Most Outstanding Player. However, in 1991 he would lose out to Doug Flutie, who was with the BC Lions and in 1999 he would be the runner-up to Danny McManus of the Hamilton Tiger-Cats.

To cap off a phenomenal career, Pitts was elected to the Canadian Football Hall of Fame in 2006. The year prior, he was enshrined on the Stampeders Wall of Fame and the team retired his jersey No. 18. 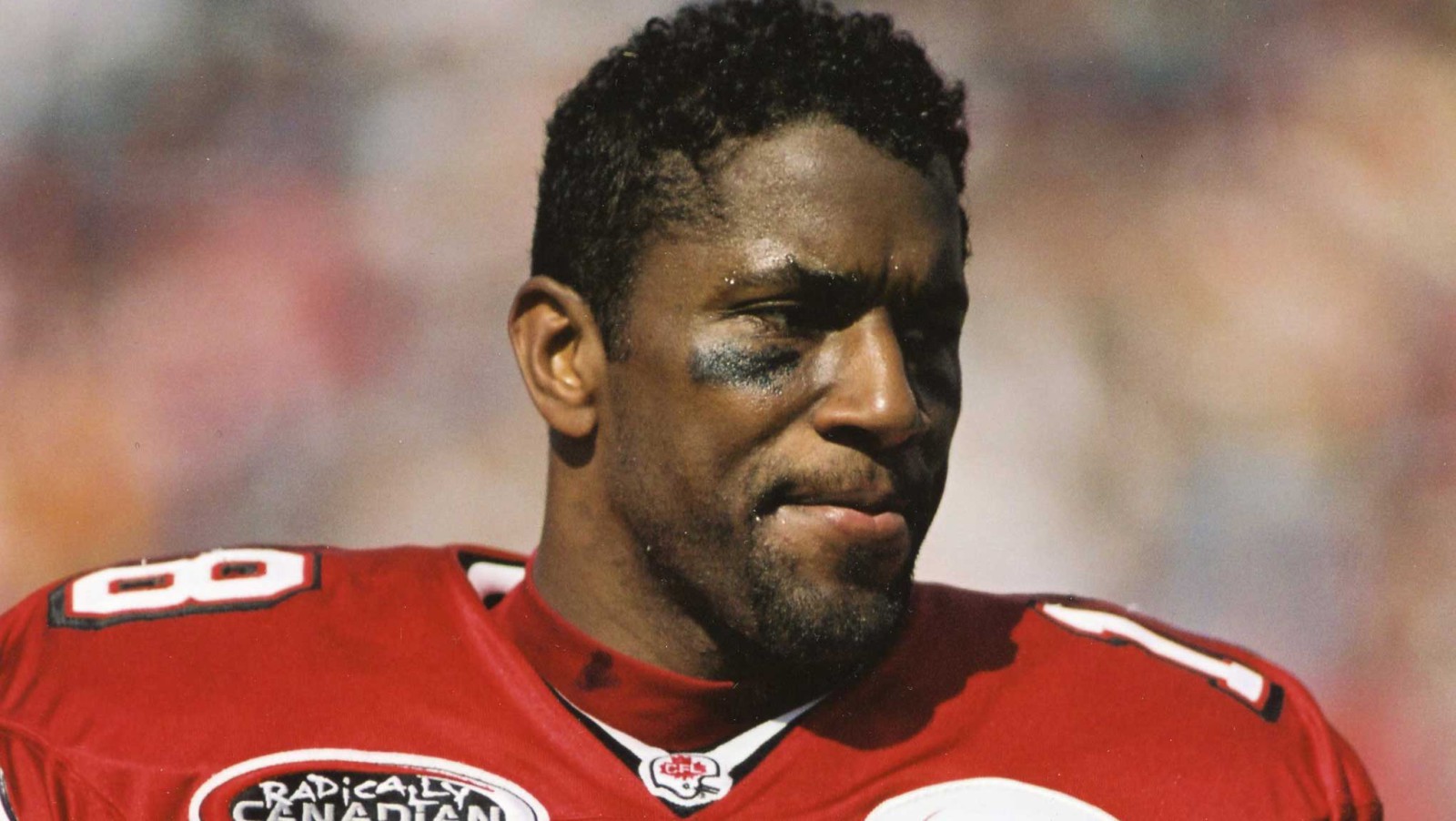