What’s better than family and football?

Ka’Deem Carey’s kids made it out to the home-opener to watch their Dad play live.

If you were anywhere near the front row of sections C and D, you probably heard a lot of “Let’s go, three-five! Let’s go, Dad!”

Perhaps they are his lucky charm or maybe they offer him that extra motivation to keep driving on every play because at both of the games they’ve attended, Carey has scored two touchdowns.

“Yes, it definitely does (motivate me),” said Carey. “Whenever they come, I feel like I have a good game.”

It was only the second time they’ve been able to see him perform in person, the other coming in last season’s Western Semi-Final in Regina.

Despite the season-ending loss, Carey finished the game with 117 yards on 22 rushes. He also began what’s looking like a new touchdown tradition.

After each major, one of the boys receives a touchdown ball from Dad.

What an awesome moment! @Kcarey25 giving his TD 🏈 to his kids! 🥰 pic.twitter.com/xYd97zpgNB

From the sideline during Thursday’s game, the boys didn’t look too surprised to see their Dad running their way after the score. It’s as if they knew the whole time their Dad would get into the end zone.

“Yup where’s my ball.” Carey laughs, “I have two boys there so I have to make sure I get two balls for them each.”

The older two, Kaison and Kyon, seem to love the game just as much as their father.

“They truly do. They love football. They play it themselves. I train with them all season. 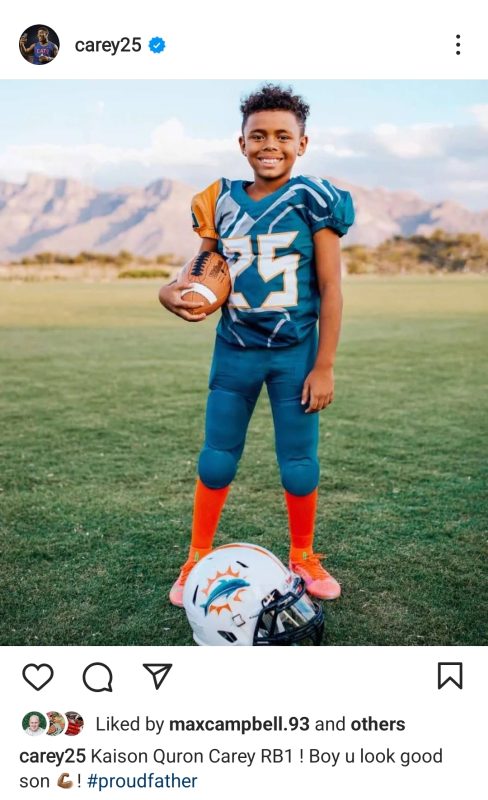 “We talk about football so much, so when I get my time to show them how to play football with passion and love… I want to show them (that).

“So they’re front-hand and can see it up close and personal. I want them to see how fun football can be.

“It’s a job but you’ve got to have fun while doing it.”

Carey is hoping to have his children at each home game for the rest of the year, which means we can look forward to a lot more “three-five” chants and Carey rushes into the end zone.