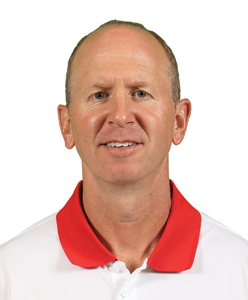 Dickenson is in his 11th season on the Stampeders coaching staff and fourth as the team’s head coach. He also serves as offensive coordinator, a position he’s held for the past eight seasons.

In 2018, Dickenson led the Stamps to their eighth Grey Cup title in franchise history as Calgary defeated the Ottawa RedBlacks 27-16. The Stamps have finished first in the West and advanced to the Grey Cup game in each of Dickenson’s first three seasons as head coach. The team’s cumulative regular-season record over that period is 41-11-2.

Calgary finished with a 13-5 record in 2018 and allowed the fewest points in the CFL. The Stamps were tied for the league lead in turnover differential and ranked second in points scored and fewest penalties committed.

In 2017, Dickenson led the Stamps to a 13-4-1 record, a second straight first-place finish in the West Division and a second consecutive appearance in the Grey Cup game. The Stamps allowed the fewest points in the CFL and were second in points scored. They also forced the most turnovers in the league while committing the fewest themselves. Dickenson was the West Division finalist for the CFL’s coach of the year award.

In his first season as head coach, Dickenson led the Stamps to a 15-2-1 mark for a franchise single-season record of 31 standings points. With their Western Final win over the BC Lions, the 2016 Stamps became the first team in franchise history to go a combined 10-0 at home in regular-season and playoff action. Dickenson set the league record for most wins by a rookie head coach and was voted the CFL’s coach of the year. Calgary scored the most points in the CFL in 2016 and also allowed the fewest.

Under Dickenson’s tutelage in 2015, the Stamps offence led the CFL in points with 452, quarterback Bo Levi Mitchell was first in the West Division with 4,551 passing yards and 26 touchdown passes and Eric Rogers led the league with 1,448 receiving yards. The Stamps allowed the fewest sacks in the league, three different tailbacks recorded 100-yard games and five members of the offence earned West Division all-star honours.

In 2012, Dickenson’s offence ranked in the top two of several categories including first in touchdowns scored and rushing touchdowns and second in points scored, first downs, rushing yards and pass-completion percentage. Cornish led the league in rushing on his way to being named the CFL’s Most Outstanding Canadian. The offence also featured three CFL all-stars in Cornish, offensive lineman Dimitri Tsoumpas and receiver Nik Lewis.

In his first season as offensive coordinator in 2011, Dickenson oversaw a Stamps offence that was tied for second-most points scored with 511. Calgary also had the second-most first downs and finished second in net yards offence and net yards rushing. The offence produced two CFL all-stars, with Tsoumpas and Lewis earning the honours.

When Dickenson joined the coaching ranks in 2009, he tutored the Stampeders running backs and helped Joffrey Reynolds claim the CFL rushing crown.

In 2010, his role expanded as he was named quarterbacks coach, called offensive plays on game days and was heavily involved in game planning. The Stamps offence led the CFL in points, total yards, first downs and rushing yards while Stamps quarterback Henry Burris was voted the CFL’s Most Outstanding Player.

Dickenson joined the coaching staff after an outstanding 13-year professional playing career. He spent 11 of his 13 seasons in the Canadian Football League, six of those with the Stampeders (1996-2000 and 2008).

A potent combination of intelligence, athletic ability and courage, Dickenson set a number of CFL passing records and was named the league’s Most Outstanding Player in 2000 after throwing for 4,636 yards, 36 touchdowns and only six interceptions while guiding the Stampeders to a 12-5-1 record.

After spending two seasons in the National Football League — with San Diego in 2001 and with Seattle, Miami and Detroit in 2002 — Dickenson returned to Canada and signed with the BC Lions where he was reunited with former Stampeders boss Wally Buono. After five seasons with the Leos – including a 2005 campaign in which he established league records for highest completion percentage and quarterback rating in a single season and an MVP performance in the 2006 Grey Cup – Dickenson returned to Calgary in 2008 for what proved to be his final season.

Dickenson joined the Stampeders in 1996 after a stellar career at the University of Montana. He was a three-time conference MVP with the Grizzlies and in 1995 led the nation in passing while guiding Montana to the NCAA Division 1-AA national title. He was named a member of the College Football Hall of Fame’s Class of 2018.

Dave, his wife Tammy and children Avery and Cooper live in Calgary year round. His coaching role extends into the off-season as he annually operates the Dickenson Passing Academy to work with young quarterbacks and receivers.