Mewata Stadium was the home of the Calgary Stampeders from the club’s inception in 1945 until the move to McMahon Stadium in 1960.

Mewata Stadium was built by the federal government and opened in 1906. Starting in 1935, the Calgary Bronks — the Stamps’ professional football predecessors in the city — started playing at Mewata. 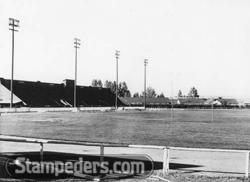 Calgary was 52-45-2 during the regular season at Mewata and 5-2 in the playoffs.

The stadium had a capacity of 13,000 during the Stamps’ tenancy but more than 18,000 fans were in attendance for an Oct. 3, 1958, contest against Saskatchewan. The Roughriders didn’t enjoy much success at Mewata over the years as they won just nine times in 38 regular-season visits.

The Stampeders’ 1998 team photo was taken at Mewata Stadium before the facility was demolished the following year.

The Mewata Stadium site (1220 9th Ave. SW) has since been converted into Shaw Millennium Park, which includes a skateboard park.