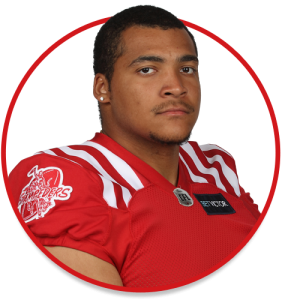 The 2019 recipient of the J.P. Metras Trophy as U Sports’ most outstanding lineman, Seinet-Spaulding was a unanimous Quebec conference all-star selection as well as a first-team all-Canadian. He was the conference’s defensive player of the year, leading all players in sacks (seven) and tackles for loss (13.5). He also made 27.5 total tackles and was named McGill’s MVP. Seinet-Spaulding was also a conference all-star in 2017 and 2018 and was named defensive rookie of the year in 2016.

Seinet-Spaulding majored in social work at McGill and was a finalist for the school’s athlete of the year award for 2019-20. He attended and played at CEGEP du Vieux Montréal prior to enrolling at McGill.