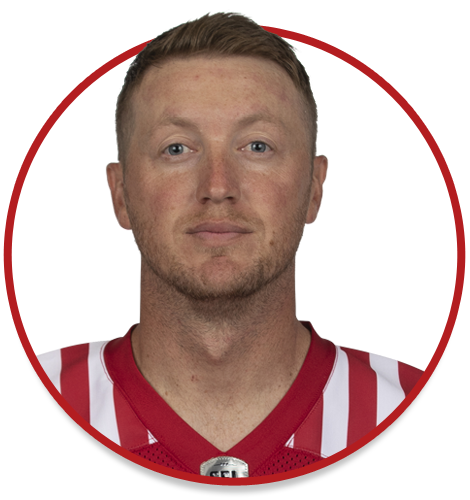 (Calgary) Mitchell played and started 11 regular-season games at quarterback, completing 211 of 325 passes – a 64.9-per cent success rate – for 2,594 yards, 10 touchdowns and 13 interceptions. He also threw for one two-point convert and had four rushing attempts for 19 yards. He was placed on the six-game injury list prior to the Week 3 game and activated for a Week 6 game in Edmonton, which represented his 100th career start. In Week 12, he connected with Malik Henry to move ahead of Henry Burris and become the franchise’s all-time leader in completions. In Week 13, he became the 18th player in CFL history to pass for 30,000 career yards. Mitchell started the Western Semi-Final and completed 26 of 36 passes for 285 yards and two interceptions. He also had one carry for two yards.

(Calgary) Mitchell was under contract with the Stampeders but the season was cancelled because of the global pandemic.

(Calgary) Mitchell started 11 regular-season games for the Stamps and completed 274 of 415 attempts (66.0 per cent) for 3,464 yards and 19 touchdowns. He threw 11 interceptions and also had two carries for four yards. The Stampeders posted an 8-3 record in Mitchell’s 11 starts and he had five games with at least 300 passing yards, including a season-high 464-yard performance in a Week 17 contest at Montreal. He had at least one touchdown pass in every game he played. In Week 3 against BC, Mitchell became the 20th player in CFL history to throw for 25,000 career passing yards and just the 12th to accumulate that yardage with one team. He also started the Western Semi-Final and completed 12 of 28 passes for 116 yards, one touchdown and three interceptions.

(Calgary) Mitchell started all 18 regular-season games for the Stamps and guided his team to a league-best 13-5 record. He was named the league’s Most Outstanding Player after leading the CFL with 35 touchdown passes and cracking the 5,000-yard plateau for the second time in his career. He completed 356 of 585 passes for 5,124 yards and his 35 touchdown throws compared to just 14 interceptions resulted in a CFL-leading touchdown-to-interception ratio of 2.5. Mitchell topped the CFL with 42 completions of at least 30 yards and had five 300-yard games as well as six other contests in which he threw for at least 270 yards. His season included a 491-yard performance that represented a single-game high for all CFL quarterbacks in 2018. Mitchell passed 14 players on the CFL’s all-time passing-yards list over the course of the season to rank 21st all-time. Mitchell added 108 rushing yards, his highest ground total since 2014. He threw for 214 yards and three touchdowns in the Western Final and had 253 passing yards and two touchdowns in the Grey Cup to earn the game’s MVP award.

(Calgary) Mitchell dressed for all 18 regular-season games, starting 17 of them. He completed 349 of 546 passes (63.9 per cent) for 4,700 yards and 23 touchdowns with 11 interceptions. He also completed six two-point converts and carried the ball three times for 17 yards. He threw his 100th career touchdown pass on July 22 to Marquay McDaniel and played his 100th career game on Sept. 9. In the Western Final, Mitchell completed 20 of 32 passes for 228 yards and one touchdown. In the Grey Cup, he completed 33 of 45 passes for 373 yards with two touchdowns and one interception.

(Calgary) Mitchell dressed for 17 games (14 starts) and completed 264 of 417 passes (63.3 per cent) for 3,389 yards with 22 touchdowns and eight interceptions. His 98.3 efficiency rating was the highest in the league. His longest pass was a 102-yard touchdown to Maurice Price in the season-opener against Montreal. He also carried the ball 35 times for 232 yards and four touchdowns. On Aug. 9, he scored an eight-yard touchdown on a fake field goal. On July 24, he tied Jeff Garcia for the CFL record for most consecutive wins to start a career with seven. On Sept. 6, he became the first quarterback in CFL history to win 12 of his first 13 starts. He was on the one-game injury list for Week 13 after suffering knee and ankle injuries on Sept. 13. He dressed for Weeks 14 and 15 but did not play. Mitchell started the Western Final — his first playoff start — and completed 14 of 22 passes for 336 yards and four touchdowns while rushing twice for five yards and a touchdown. He also started the Grey Cup and earned MVP honours after completing 25 of 34 passes for 334 yards and one interception and adding four rushes for 19 yards.

(Calgary) Mitchell dressed for all 18 games and made three starts. He saw significant playing time on July 20 and again on Sept. 2 in relief of Kevin Glenn. He got his first CFL start on July 26 and was named the CFL’s offensive player of the week after he completed 29 of 33 passes for 376 yards and three touchdowns. Mitchell got his second start on Sept. 6 in Edmonton and his third start on Sept. 13 vs Hamilton. In total, he completed 94 of 135 passes (69.6 per cent) for 1,156 yards with 10 touchdowns and three interceptions. He also has 35 carries for 151 yards and two touchdowns. He was also the holder on field goals. Mitchell saw some action at the end of the Western Final and completed one of three passes for six yards and ran once for five yards.

(Calgary) Mitchell dressed as a backup quarterback for all 18 regular-season games, two playoff games and the Grey Cup. He was used as the Stamps’ short-yardage quarterback and during the regular season he ran the ball 34 times for 67 yards and five touchdowns. He also completed 12 of 21 pass attempts for 168 yards and two touchdowns. In the playoffs, Mitchell ran the ball three times for six yards and two touchdowns in the Western Semi-Final and five times for seven yards and one touchdown in the Western Final. In the West final, he had one pass completion for 42 yards. In the Grey Cup, Mitchell came off the bench to finish the game and completed six of nine passes for 80 yards and a touchdown and also threw for a successful two-point convert.

Record-breaker: Tied Jeff Garcia’s CFL record for most consecutive wins to start a career with seven

Mitchell spent two seasons (2010-11) with the Eastern Washington Eagles. He led EWU to its first national title in football when the Eagles won the 2010 NCAA Division I FCS National Championship with a 20-19 comeback victory over the University of Delaware. Mitchell was named the game’s Most Outstanding Player after throwing three touchdown passes in the final 16 minutes of the game. Mitchell led the FCS in four statistical categories in 2011 including passing yards (4,009) and touchdown passes (33) on his way to breaking four school records. He won the Walter Payton Award as best offensive player in the FCS and also was named the Big Sky Conference Offensive Player of the Year. Mitchell was named to seven All-American teams in 2011, including six first-team honours. In 2010, Mitchell was an all-Big Sky Conference honourable mention and was named to the Big Sky all-academic squad after starting 14 of 15 games for the Eagles. Mitchell started his college career at Southern Methodist University and spent two seasons (2008-09) with the Mustangs, starting 19 games and throwing for 4,590 yards, 36 touchdowns and 33 interceptions. Mitchell had six 300-yards passing games and six contests with at least three TD passes at SMU.

Mitchell threw for 2,451 yards, 37 touchdowns and just four interceptions as a senior at Katy High School in Texas. He was a two-star Rivals.com and Scout.com prospect. Mitchell led his high school team to an undefeated season and a state championship. Mitchell was an interdisciplinary liberal arts major in college. Mitchell has previously hosted his own radio show and is currently co-host of a podcast with curler Ben Hebert, a two-time Olympian and four-time Brier champion.